I have a table containing decimal numbers in one column. I'm looking to align them in a manner similar to a word processor's "decimal tab" feature, so that all the points sit on a vertical line.

I have two possible solutions at the moment but I'm hoping for something better...

Solution 1: Split the numbers within the HTML, e.g.

(Yes, this solution doesn't quite work as-is. The concept is, however, valid.)

Solution 2: I found mention of

This is part of HTML4 according to the reference page, but it doesn't work in FF3.5, Safari 4 or IE7, which are the browsers I have to hand. It also has the problem that you can't pull out the numeric formatting to CSS (although, since it's affecting a whole column, I suppose that's not too surprising).

Thus, anyone have a better idea?

Another way to format a number would be like this: 35<span style="visibility: hidden">.000</span>. That is, write it out with the full decimal expansion, but write the trailing decimals in invisible ink. That way you don't have to worry about the width of the decimal point.

It's a whitespace character that is designed (by font authors, if they follow the standard) to be the same width as digits and to keep its spacing, like its more famous cousin the No-Break Space. You can use it to pad numbers to a certain string size, either on the left or on the right hand side, taking care of aligning the column or div on the same side.

Examples, both left-aligned and left-padded with figure spaces:

Cheat; benefit of this solution: also works for proportional fonts. Have one extra column and split the integer part from the decimal separator and the decimals. Then use this css and combine two columns in the header row: 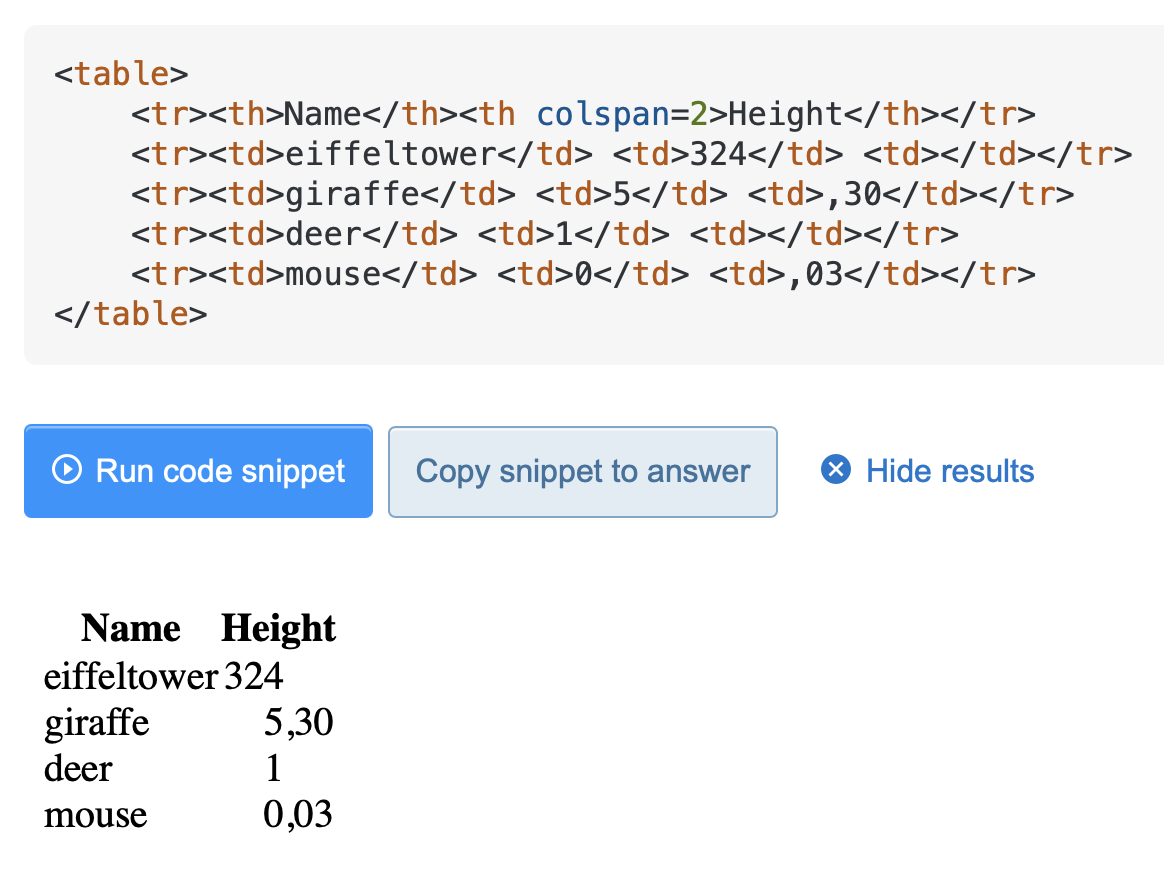 I played around with jQuery & came up with this...

It seemed to work.

can you just print the numbers so that they always have the same number of decimal places, and right align them?

Thousands of years ago (or 2-3) I wrote a jQuery shim that emulates align="char" which still seems to work. It uses CSS padding and accounts for colspans, so it's moderately clever, but it's really not very pretty code (I was just starting out in javascript back then). I'd love for someone to rewrite it (and take all the credit).

Trivia: The reason that browsers don't properly support column styles is that tables are 2D data structures and the DOM (which is what Javascript and CSS operate on, and how HTML5 is defined) is purely hierarchical and therefore can't represent both columns and rows. Instead it simply defines rows and cells, and doesn't represent columns at all.

I love short answers, even though the long ones are important too, so I liked;

just to throw php into the mix. Much depends on fixed width fonts, still, but the latter works for me. Since data oft is already tabular, adding another table within a cell is just too much typing and hard to maintain.

If the numbers are monospaced, javascript could be used to adjust the padding on the cell (in ems), depending on the number of digits before the decimal point. Otherwise, it could be tricky.

The function made by Krijn Hoetmer interferes with prettyPhoto ( http://www.no-margin-for-errors.com/projects/prettyphoto-jquery-lightbox-clone/ ) so I made a jQuery version. The currency part is removed as it should be made dynamic instead of replacing strings based on predefined currencies.

I have used JavaScript to fix this issue... This is my HTML.

This is my JavaScript.

A serious trouble in the previous approaches, is that only think in visual, but do not in other needs or uses of tables as sorting or filtering, where pure data is important.

Unfortunately CSS4 are not available yet. Then a valid solution could be pass the value and units or type unit in data attributes on td cell.

If a cell have a data value, it must read with javascript and updated to the decimal numbers that we requires.

At the end, when we have normalized data, they will looks great with mono fonts and with their units placed using css selectors as before or after.

I put an extended example in: https://jsfiddle.net/jam65st/wbo63xpu/12/

Ugly workaround but will save you from writing a lot of code: You can find the max number in the array (list) of prices, then you can take the number of its digits and set inline style "width": (maxNumberDigits * 10)px - this is the ugly part! And the container of this data (cell if its table) should have additionally

1
Centering numbers relative to the dots
-1
Align items left in HTML
0
How do I align money values in table column to decimal point
0
Aligning currency values in table
24
Is html <COL align> deprecated?
3
rails format positive and negative numbers
1
How to align a list of custom-counters?
1
justify prices to right
0
List Alignment with CSS