I have a couple of problems to solve for an assignment, and am a bit stuck. The question is to write a program that gets the user to input an odd number (check it's odd), then print an upside down pyramid of stars based on the size of the input.

For example, if you enter 5, it comes up with

My problem is therefore two-fold.

2) How do I change the asterisks in the middle of each line?

Any help with either problem is greatly appreciated.

Giving you the complete answer would have no point at all since this is homework, so here are a few pointers :

definitely is a very good way to find whether your number is even.

In case you do not know %, this does modulo which is here the remainder of the division of number by 2. http://en.wikipedia.org/wiki/Modulo_operation

Second advice: In order to center the asterisks, you need to find out how many spaces to write before the asterisks. Then you can print a bunch of spaces and asterisks with print " "*1 + "*"*3

The modulo 2 solutions with %2 is good, but that requires a division and a subtraction. Because computers use binary arithmetic, a much more efficient solution is:

A few of the solutions here reference the time taken for various "is even" operations, specifically n % 2 vs n & 1, without systematically checking how this varies with the size of n, which turns out to be predictive of speed.

The short answer is that if you're using reasonably sized numbers, normally < 1e9, it doesn't make much difference. If you're using larger numbers then you probably want to be using the bitwise operator. 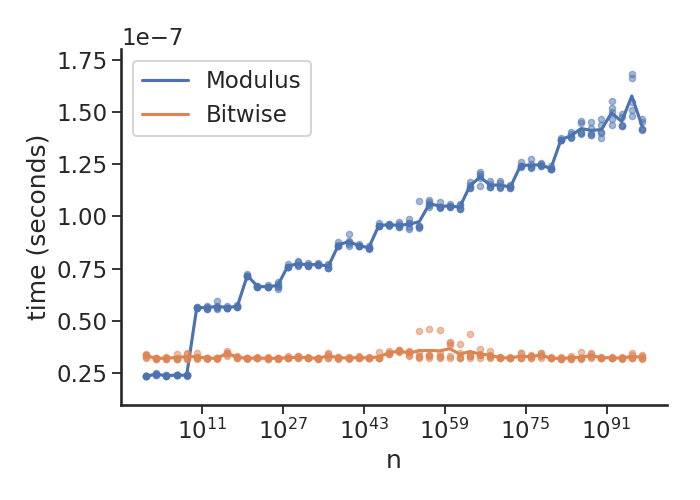 Basically as you hit "arbitrary precision" longs things get progressively slower for modulus, while remaining constant for the bitwise op. Also, note the 10**-7 multiplier on this, i.e. I can do ~30 million (small integer) checks per second. 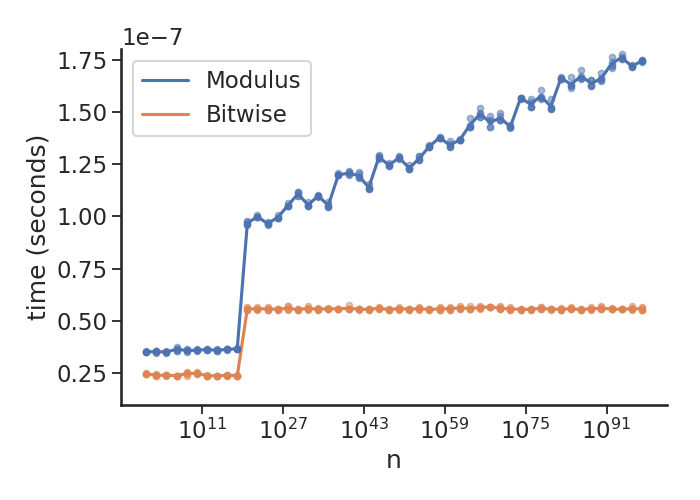 which shows the optimisation that's gone into newer versions of Python.

I've only got these versions of Python on my machine, but could rerun for other versions of there's interest. There are 51 ns between 1 and 1e100 (evenly spaced on a log scale), for each point I do the equivalent of:

where niter is calculated to make timeit take ~0.1 seconds, and this is repeated 5 times. The slightly awkward handling of n is to make sure we're not also benchmarking global variable lookup, which is slower than local variables. The mean of these values are used to draw the line, and the individual values are drawn as points.

Simple but yet fast:

will tell you that it's even. So odd numbers would be the else statement there. The "%" is the mod sign which returns the remainder after dividing. So essentially we're saying if the number is divisible by two we can safely assume it's even. Otherwise it's odd (it's a perfect correlation!)

As for the asterisk placing you want to prepend the asterisks with the number of spaces correlated to the line it's on. In your example

I guess the easiest and most basic way is this

Just basic conditions and math. It also minds zero, which is neither even, nor odd and you give any number you want by input so it's very variable.

Regarding the printout, here's how I would do it using the Format Specification Mini Language (section: Aligning the text and specifying a width):

there are a lot of ways to check if an int value is odd or even. I'll show you the two main ways:

This is simple code. You can try it and grab the knowledge easily.

#1st part ensures that it is an odd number that was entered.2nd part does the printing of triangular

Modulus method is the usual method. We can also do this to check if odd or even:

Integer division by 2 followed by multiplication by two.

My solution basically we have two string and with the & we get the right index:

Please note that it seems slower than other alternatives:

Ok, the assignment was handed in 8+ years ago, but here is another solution based on bit shifting operations:

However, instead of a code that says "give me this precise input (an integer odd number) or otherwise I won't do anything" I also like robust codes that say, "give me a number, any number, and I'll give you the nearest pyramid to that number".

In that case this function is helpful, and gives you the nearest odd (e.g. any number f such that 6<=f<8 is set to 7 and so on.)

but there is a catch because it is almost impossible to return a pattern so we have to print instead of return it then use it directly oddOrEven(5) will print:

Using is is faster than the comparisons with double equals, but negation with ~ is even faster.

Not the answer you're looking for? Browse other questions tagged python numbers or ask your own question.

86
Check if a number is odd or even in Python
-2
How to access data from a list in python and for the program to recognise whether it is even or odd
1
Python Modulo TypeError
1
How to make a list of N consecutive odd numbers starting from 1
0
Using the "not" and "&" operators to check for even number (Python)
-1
Need Python Help for increasing Numbers
0
How does this two-function recursion work?
0
dictionary with list comprehension
-1
How to sum numbers from a linked list?
0
How do I return a boolean value after I've carried out a operation in a functions by using a parameter?
See more linked questions