Why transforming normals with the transpose of the inverse of the modelview matrix?

I am working on some shaders, and I need to transform normals.

I read in few tutorials the way you transform normals is you multiply them with the transpose of the inverse of the modelview matrix. But I can't find explanation of why is that so, and what is the logic behind that?

It flows from the definition of a normal.

Suppose you have the normal, N, and a vector, V, a tangent vector at the same position on the object as the normal. Then by definition N·V = 0.

The same logic applies for non-planar surfaces by considering limits.

In this case suppose you intend to transform the model by the matrix B. So B will be applied to the geometry. Then to figure out what to do to the normals you need to solve for the matrix, A so that:

Turning that into a row versus column thing to eliminate the explicit dot product:

Pull the transpose outside, eliminate the brackets:

But we started by stating that transpose(N)*V = 0, since that's the same as saying that N·V = 0. So to satisfy our constraints we need the middle part of the expression — transpose(A)*B — to go away.

Hence we can conclude that:

My favorite proof is below where N is the normal and V is a tangent vector. Since they are perpendicular their dot product is zero. M is any 3x3 invertible transformation (M-1 * M = I). N' and V' are the vectors transformed by M. 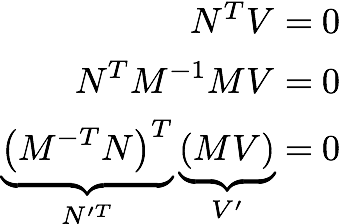 To get some intuition, consider the shear transformation below. 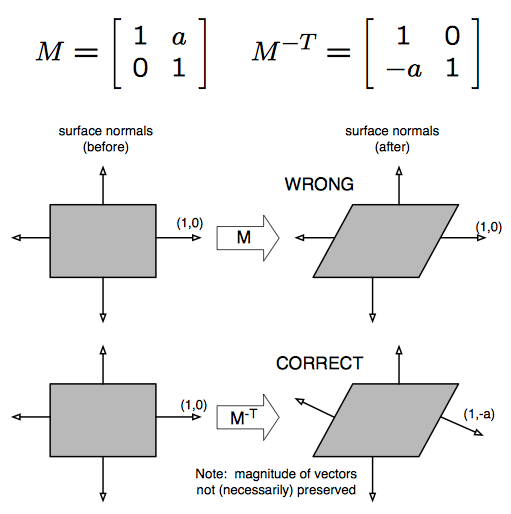 Note that this does not apply to tangent vectors.

Take a look at this tutorial:

You can imagine that when the surface of a sphere stretches (so the sphere is scaled along one axis or something similar) the normals of that surface will all 'bend' towards each other. It turns out you need to invert the scale applied to the normals to achieve this. This is the same as transforming with the Inverse Transpose Matrix. The link above shows how to derive the inverse transpose matrix from this.

Also note that when the scale is uniform, you can simply pass the original matrix as normal matrix. Imagine the same sphere being scaled uniformly along all axes, the surface will not stretch or bend, nor will the normals.

If the model matrix is made of translation, rotation and scale, you don't need to do inverse transpose to calculate normal matrix. Simply divide the normal by squared scale and multiply by model matrix and we are done. You can extend that to any matrix with perpendicular axes, just calculate squared scale for each axes of the matrix you are using instead.

Don't understand why you just don't zero out the 4th element of the direction vector before multiplying with the model matrix. No inverse or transpose needed. Think of the direction vector as the difference between two points. Move the two points with the rest of the model - they are still in the same relative position to the model. Take the difference between the two points to get the new direction, and the 4th element, cancels out to zero. Lot cheaper.

Not the answer you're looking for? Browse other questions tagged opengl glsl game-engine game-physics or ask your own question.

10
gl_NormalMatrix
5
Specular lighting appears on both eye-facing and rear sides of object
3
GPU Skeletal Animation and Normals. Is there fast way to get transpose(inverse(m))?
2
Verification of transformation matrix usage in vertex shader. Correctness or normals transformation
2
Why do I have to calculate the transpose of the inverse of the model matrix in order to calculate the normal for the reflection texture?
5
Vertex position relative to normal
1
Trouble with GLSL dot product
1
How to determine the orientation of a geometry surface in Scenekit
1
GLSL normal vector transformation
1
Problem with diffuse lighting with OpenGL
See more linked questions

29
How do you get the modelview and projection matrices in OpenGL?
2
GLSL normals with non-standard projection matrix
1
How do I retrieve the ModelView matrix in GLSL 1.5?
19
How to calculate the normal matrix?
2
why the modelview matrix?
3
GPU Skeletal Animation and Normals. Is there fast way to get transpose(inverse(m))?
1
GLSL 1.3 inverse 4x4 matrix