Git Shell in Windows: patch's default character encoding is UCS-2 Little Endian - how to change this to ANSI or UTF-8 without BOM?

When creating a diff patch with Git Shell in Windows (when using GitHub for Windows), the character encoding of the patch will be UCS-2 Little Endian according to Notepad++ (see the screenshots below).

How can I change this behavior, and force git to create patches with ANSI or UTF-8 without BOM character encoding?

It causes a problem because UCS-2 Little Endian encoded patches can not be applied, I have to manually convert it to ANSI. If I don't, I get "fatal: unrecognized input" error. 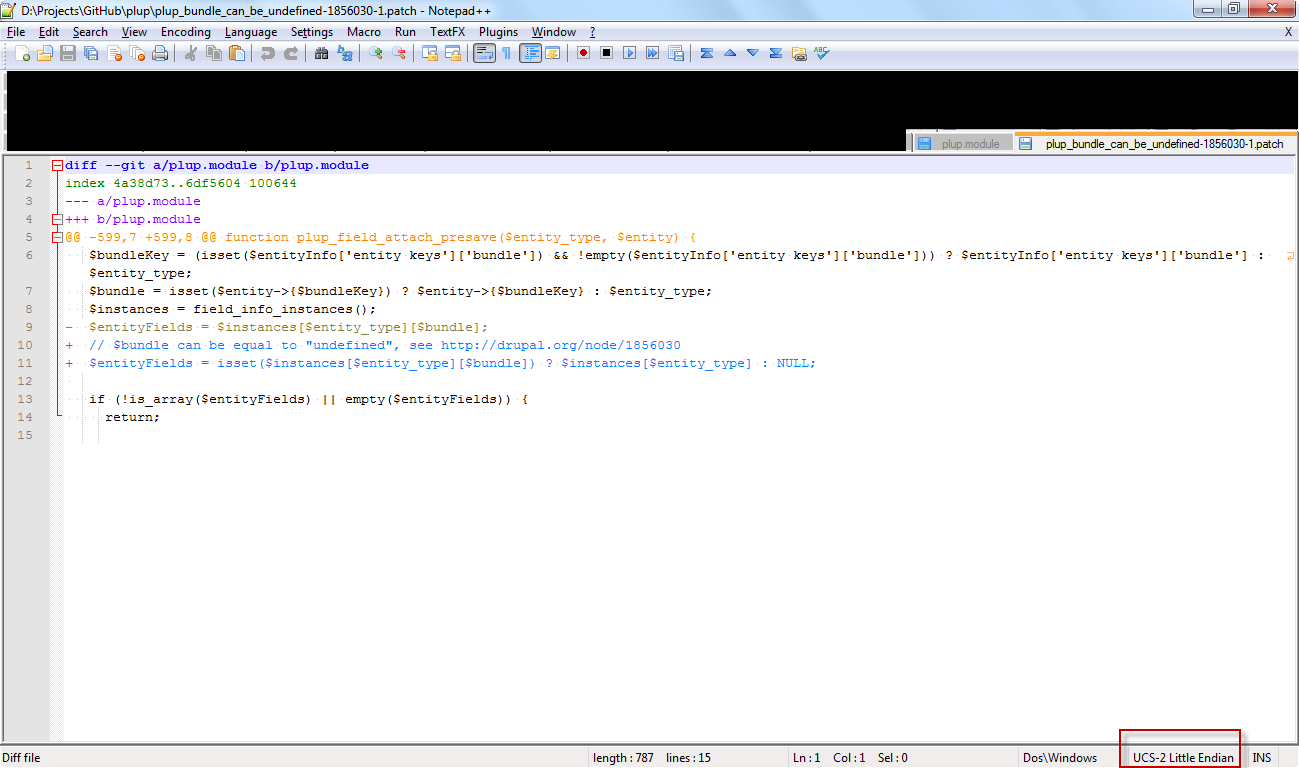 Since then, I also realized that I have to manually convert the EOL from Windows format (\r\n) to UNIX (\n) in Notepad++ (Edit > EOL Conversion > UNIX). If I don't do this, I get "trailing whitespace" error (even if all the whitespaces are trimmed: "TextFX" > "TextFX Edit" > "Trim Trailing Spaces").

So, the steps I need to do for the patch to be applied:

Please, take a look at this screenshot: 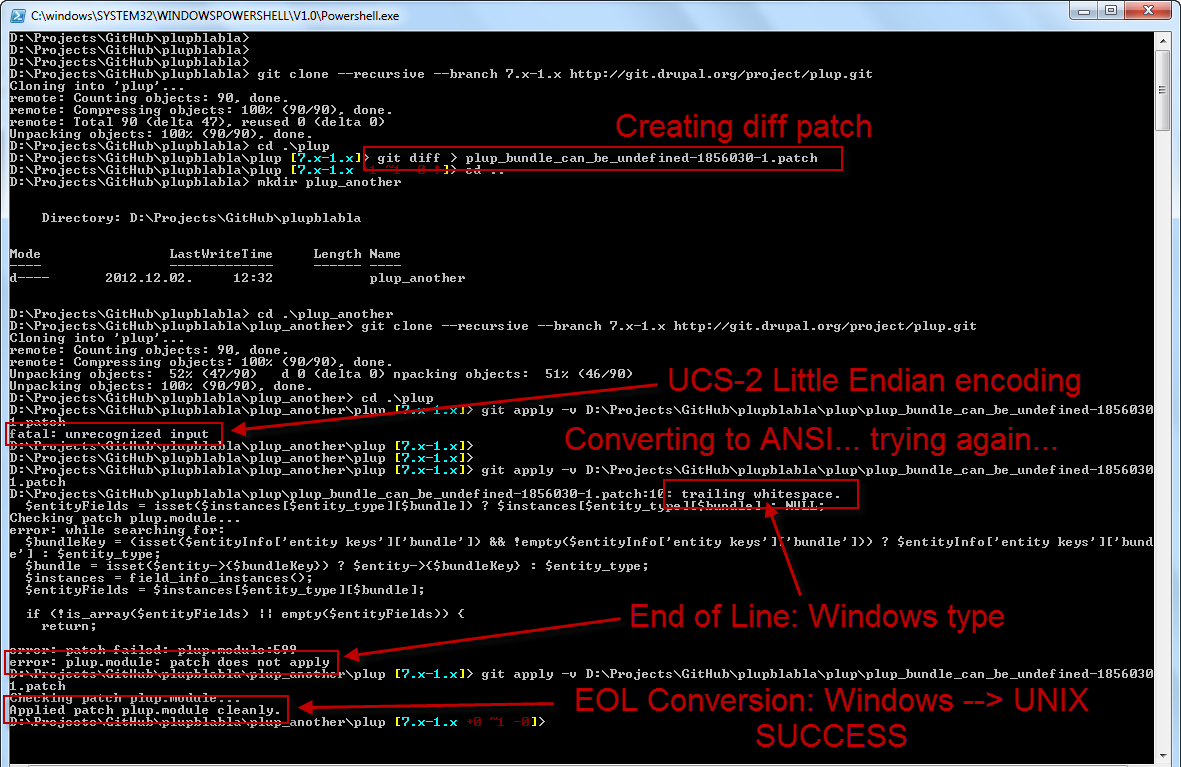 I'm not a Windows user, so take my answer with a grain of salt. According to the Windows PowerShell Cookbook, PowerShell preprocesses the output of git diff, splitting it in lines. Documentation of the Out-File Cmdlet suggests, that > is the same as | Out-File without parameters. We also find this comment in the PowerShell documentation:

Out-file formats file contents to look like console output. This causes the output to be truncated just as it is in a console window in most circumstances. [...]

To get output that does not force line wraps to match the screen width, you can use the Width parameter to specify line width.

So, apparently it is not Git which chooses the character encoding, but Out-File. This suggests a) that PowerShell redirection really should only be used for text and b) that

will avoid the encoding problems. However, this still does not solve the problem with Windows vs. Unix line-endings . There are Cmdlets (see the PowerShell Community Extensions) to do conversion of line-endings.

However, all this recoding does not increase my confidence in a patch (which has no encoding itself, but is just a string of bytes). The aforementioned Cookbook contains a script Invoke-BinaryProcess, which can be used redirect the output of a command unmodified.

To sidestep this whole issue, an alternative would be to use git format-patch instead of git diff. format-patch writes directly to a file (and not to stdout), so its output is not recoded. However, it can only create patches from commits, not arbitrary diffs.

format-patch takes a commit range (e.g. master^10..master^5) or a single commit (e.g. X, meaning X..HEAD) and creates patch files of the form NNNN-SUBJECT.patch, where NNNN is an increasing 4-digit number and subject is the (mangled) subject of the patch. An output directory can be specified with -o.

If you use powershell you can also just do:

This makes command to be run through CMD which writes to output file as is.

In case this helps anyone, using the good old Command Prompt instead of PowerShell works flawlessly; it doesn't seem to suffer from any of the issues present in PowerShell in regards to character encoding and EOLs. 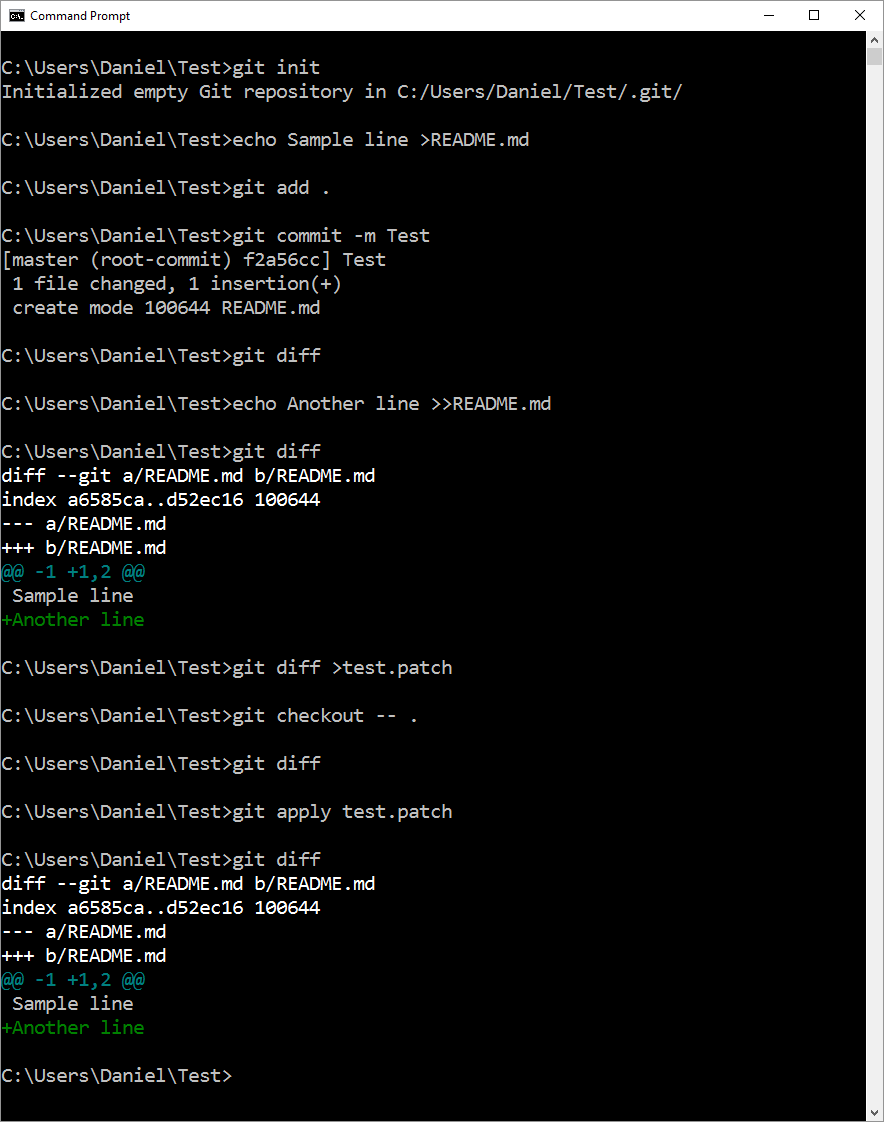 Doing dos2unix on the diff generated on powershell seems to do the trick for me. I was then able to apply the diff successfully.

As mentioned by Lars Noschinski you need to fix the Output of Out-File. You can set the DefaultParameter of Out-File using the following commands.

After setting the Default parameters you can use the > to export a patch file.

After adding those two lines to my Profile file everything works as expected.

Not the answer you're looking for? Browse other questions tagged powershell git encoding github or ask your own question.

3
git refuses to patch with the error "unrecognised input"
659
What's the strategy for handling CRLF (carriage return, line feed) with Git?
59
How do I correct the character encoding of a file?
45
Git 1.6.4 beta on Windows (msysgit) - Unix or DOS line termination
12
Malformed dumpfile header when migrating repository from Windows to Linux (encoding issue?)
6
Git format-patch output in a single file
4
Git porcelain command to revert a single file to its HEAD state but keep its staged state?
3
How to capture binary stdout of a console exe run from Powershell?
0
git am: Patch format detection failed. git apply also fails

259
How line ending conversions work with git core.autocrlf between different operating systems
1
Converting text/csv files to UTF-8 format in batch file
4
How to convert the encoding of a file to ISO-8859-1 in Notepad++?
0
How can I Change the encoding of a file 'without BOM' to an 'Windows - 1252' encoded file?
7
How do I change my Powershell script so that it writes out-file in ANSI - Windows-1252 encoding?
0
Perl or Powershell how to convert from UCS-2 little endian to utf-8 or do inline oneliner search replace regex on UCS-2 file
1
Why does emacs (for windows) change the encoding of xml files from utf-16 little endian to utf-16 big endian?
778
How can I deal with this Git warning? "Pulling without specifying how to reconcile divergent branches is discouraged"