How to extend an existing JavaScript array with another array, without creating a new array

There doesn't seem to be a way to extend an existing JavaScript array with another array, i.e. to emulate Python's extend method.

I want to achieve the following:

I know there's a a.concat(b) method, but it creates a new array instead of simply extending the first one. I'd like an algorithm that works efficiently when a is significantly larger than b (i.e. one that does not copy a).

Note: This is not a duplicate of How to append something to an array? -- the goal here is to add the whole contents of one array to the other, and to do it "in place", i.e. without copying all elements of the extended array.

The .push method can take multiple arguments. You can use the spread operator to pass all the elements of the second array as arguments to .push:

If your browser does not support ECMAScript 6, you can use .apply instead:

Or perhaps, if you think it's clearer:

Please note that all these solutions will fail with a stack overflow error if array b is too long (trouble starts at about 100,000 elements, depending on the browser).
If you cannot guarantee that b is short enough, you should use a standard loop-based technique described in the other answer.

Update 2018: A better answer is a newer one of mine: a.push(...b). Don't upvote this one anymore, as it never really answered the question, but it was a 2015 hack around first-hit-on-Google :)

For those that simply searched for "JavaScript array extend" and got here, you can very well use Array.concat.

Concat will return a copy the new array, as thread starter didn't want. But you might not care (certainly for most kind of uses this will be fine).

There's also some nice ECMAScript 6 sugar for this in the form of the spread operator:

You should use a loop-based technique. Other answers on this page that are based on using .apply can fail for large arrays.

A fairly terse loop-based implementation is:

You can then do the following:

DzinX's answer (using push.apply) and other .apply based methods fail when the array that we are appending is large (tests show that for me large is > 150,000 entries approx in Chrome, and > 500,000 entries in Firefox). You can see this error occurring in this jsperf.

For a speed comparison with other answers on this page, check out this jsperf (thanks to EaterOfCode). The loop-based implementation is similar in speed to using Array.push.apply, but tends to be a little slower than Array.slice.apply.

Interestingly, if the array you are appending is sparse, the forEach based method above can take advantage of the sparsity and outperform the .apply based methods; check out this jsperf if you want to test this for yourself.

By the way, do not be tempted (as I was!) to further shorten the forEach implementation to:

because this produces garbage results! Why? Because Array.prototype.forEach provides three arguments to the function it calls - these are: (element_value, element_index, source_array). All of these will be pushed onto your first array for every iteration of forEach if you use "forEach(this.push, this)"!

I feel the most elegant these days is:

The MDN article on the spread operator mentions this nice sugary way in ES2015 (ES6):

Example: push is often used to push an array to the end of an existing array. In ES5 this is often done as:

In ES6 with spread this becomes:

Do note that arr2 can't be huge (keep it under about 100 000 items), because the call stack overflows, as per jcdude's answer.

Each snippet modifies a to be extended with b.

The "limited" snippets pass each array element as an argument, and the maximum number of arguments you can pass to a function is limited. From that link, it seems that a.push(...b) is reliable until there are about 32k elements in b (the size of a does not matter).

Every method is fast if both a and b are small, so in most web applications you'll want to use push(...b) and be done with it.

If you're handling more than a few thousand elements, what you want to do depends on the situation:

This surprised me: I thought a=a.concat(b) would be able to do a nice memcpy of b onto a without bothering to do individual extend operations as a.push(...b) would have to do, thus always being the fastest. Instead, a.push(...b) is much, much faster especially when a is large.

The speed of different methods was measured in Firefox 88 on Linux using:

Note that a Bsize of 500 000 is the largest value accepted by all methods on my system, that's why it is smaller than Asize.

All tests were run multiple times to see if the results are outliers or representative. The fast methods are almost immeasurable in just one run using performance.now(), of course, but since the slow methods are so obvious and the two fast methods both work on the same principle, we needn't bother repeating it a bunch of times to split hairs.

The concat method is always slow if either array is large, but the loop is only slow if it has to do a lot of function calls and doesn't care how large a is. A loop is thus similar to push(...b) or push.apply for small bs but without breaking if it does get large; however, when you approach the limit, concat is a bit faster again.

First a few words about apply() in JavaScript to help understand why we use it:

The apply() method calls a function with a given this value, and arguments provided as an array.

Push expects a list of items to add to the array. The apply() method, however, takes the expected arguments for the function call as an array. This allows us to easily push the elements of one array into another array with the builtin push() method.

Imagine you have these arrays:

and simply do this:

The result will be:

The same thing can be done in ES6 using the spread operator ("...") like this:

Shorter and better but not fully supported in all browsers at the moment.

Also if you want to move everything from array b to a, emptying b in the process, you can do this:

and the result will be as follows:

If you want to use jQuery, there is $.merge()

I like the a.push.apply(a, b) method described above, and if you want you can always create a library function like this:

It is possible to do it using splice():

But despite being uglier it is not faster than push.apply, at least not in Firefox 3.0.

as the top voted answer says, a.push(...b) is probably the correct answer taking into account the size limit issue.

On the other hand, some of the answers on performance seem out of date. 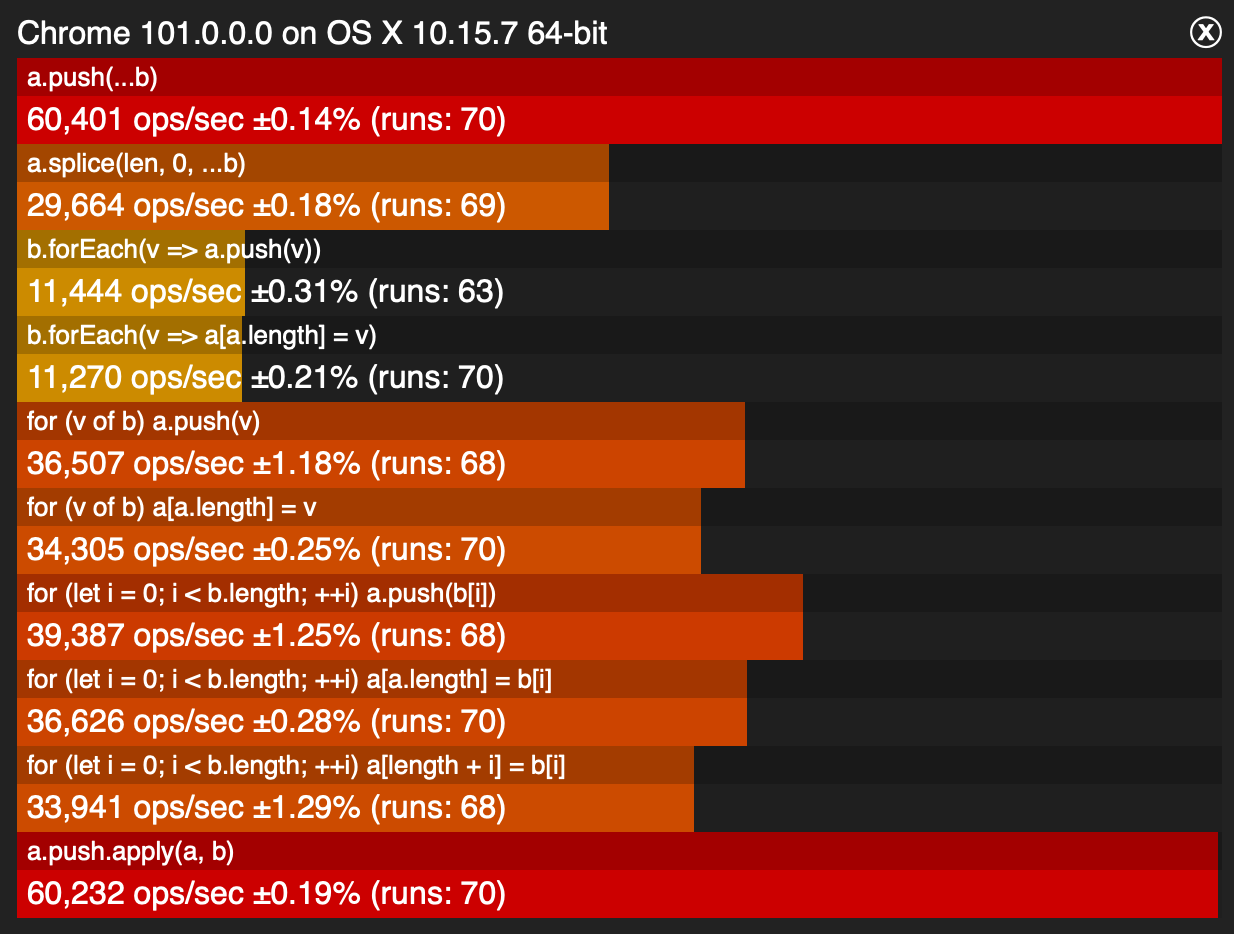 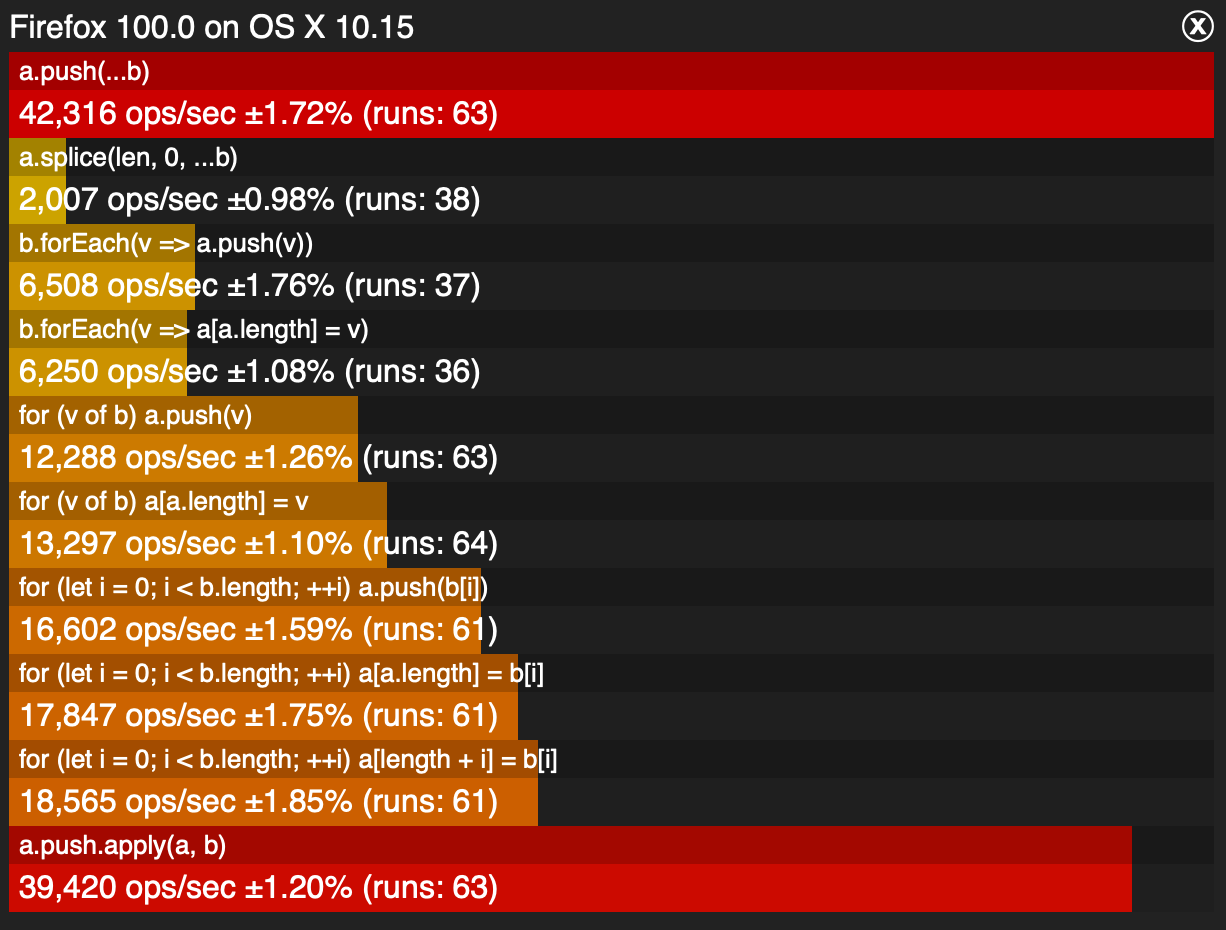 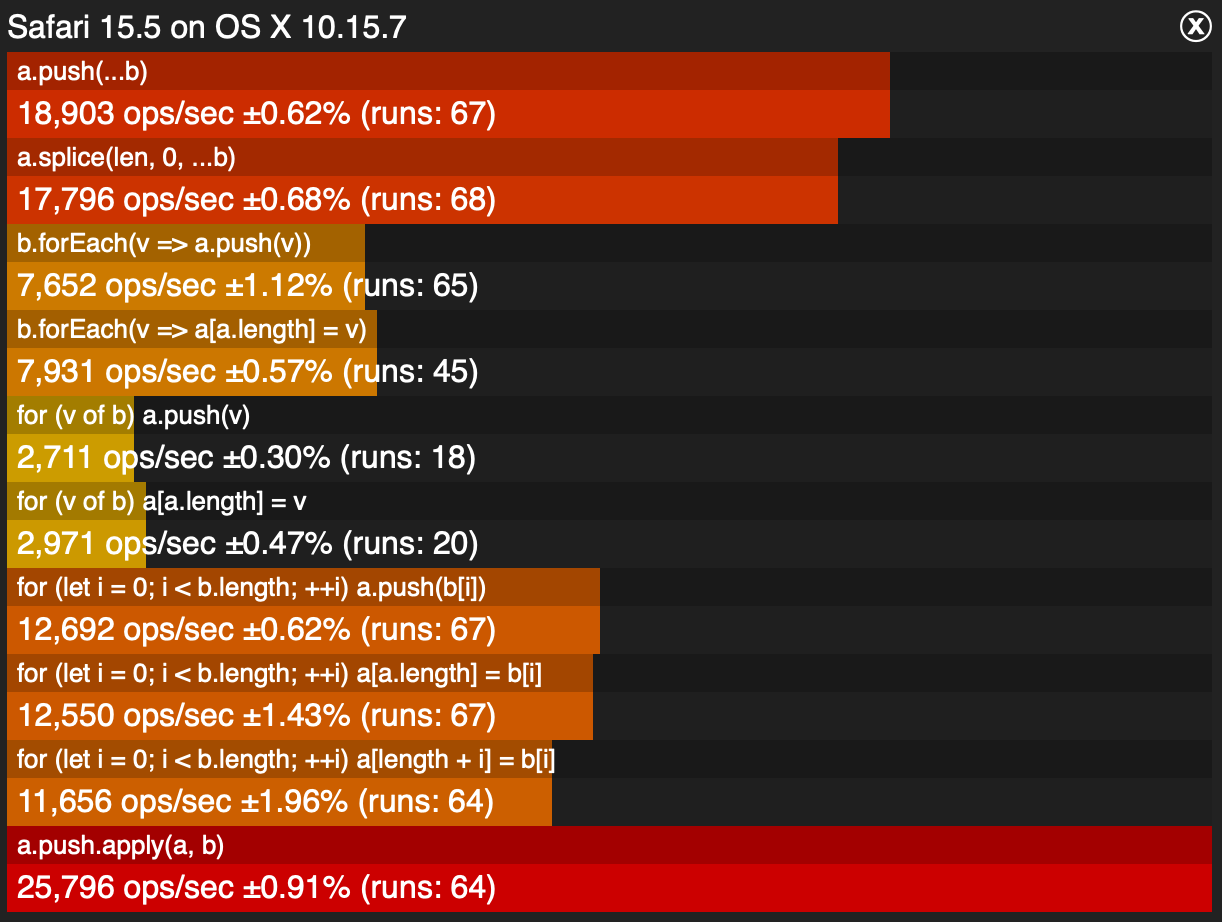 At appears that push is fastest across the board in 2022. That may change in the future.

Answers ignoring the question (generating a new array) are missing the point. Lots of code might need/want to modify an array in place given there can be other references to the same array

Those other references could be deep in some object, something that was captured in a closure, etc...

As a probably bad design but as an illustration, imagine you had

Then you want to add items to the cart

As an aside, the answers suggesting modifying Array.prototype are arguably bad adivce. Changing the native prototypes is bascially a landmine in your code. Another implementation maybe be different than yours and so it will break your code or you'll break their code expecting the other behavior. This includes if/when a native implmentation gets added that clashes with yours. You might say "I know what I'm using so no issue" and that might be true at the moment and you're a single dev but add a second dev and they can't read your mind. And, you are that second dev in a few years when you've forgotten and then graft some other library (analytics?, logging?, ...) on to your page and forget the landmind you left in the code.

This is not just theory. There are countless stories on the net of people running into these landmines.

Arguably there are just a few safe uses for modifying a native object's prototype. One is to polyfill an existing and specified implementation in an old browser. In that case, the spec is defined, the spec is implemented is shipping in new browsers, you just want to get the same behavior in old browsers. That's pretty safe. Pre-patching (spec in progress but not shipping) is arguably not safe. Specs change before shipping.

This solution works for me (using the spread operator of ECMAScript 6):

I'm adding this answer, because despite the question stating clearly without creating a new array, pretty much every answer just ignores it.

Modern JavaScript works well with arrays and alike as iterable objects. This makes it possible to implement a version of concat that builds upon that, and spans the array data across its parameters logically.

The example below makes use of iter-ops library that features such logic:

Above, no new array is created. Operator concat will iterate through the original array, then will automatically continue into array2, then array3, and so on, in the specified order.

This is the most efficient way of joining arrays in terms of memory usage.

And if, at the end, you decide to convert it into an actual physical array, you can do so via the spread operator or Array.from:

You can create a polyfill for extend as I have below. It will add to the array; in-place and return itself, so that you can chain other methods.

Another solution to merge more than two arrays

Then call and print as:

The answer is super simple.

Concat acts very similarly to JavaScript string concatenation. It will return a combination of the parameter you put into the concat function on the end of the array you call the function on. The crux is that you have to assign the returned value to a variable or it gets lost. So for example

Another option, if you have lodash installed:

You can do that by simply adding new elements to the array with the help of the push() method.

There are other methods too. You can check them out here.

Super simple, does not count on spread operators or apply, if that's an issue.

After running some performance tests on this, it's terribly slow, but answers the question in regards to not creating a new array. Concat is significantly faster, even jQuery's $.merge() whoops it.

132
Append an array to another array in JavaScript
31
how to do a "flat push" in javascript?
18
How to concat arrays in JS in mutating way?
7
How can I append an array of objects to an already existing array?
-1
Add elements of an array to another array
2
Push one array to the end of another
1
Add multiple elements into all arrays that are equal
0
Push multi values in javascript array and get the first element?
1
Sort array of objects based on new data
-1
Merge two arrays without override
See more linked questions