I saw new comparsion tool in VS 2012 for comparing two files or two versions of file. I like it. But when I tried to find it I can't because I don't use TFS.

Is there a way how I can just compare two files with the built-in feature in VS (but without TFS)?

You can invoke devenv.exe /diff list1.txt list2.txt from the VS Developer Command Prompt or, if a Visual Studio instance is already running, you can type Tools.DiffFiles in the Command window, with a handy file name completion: 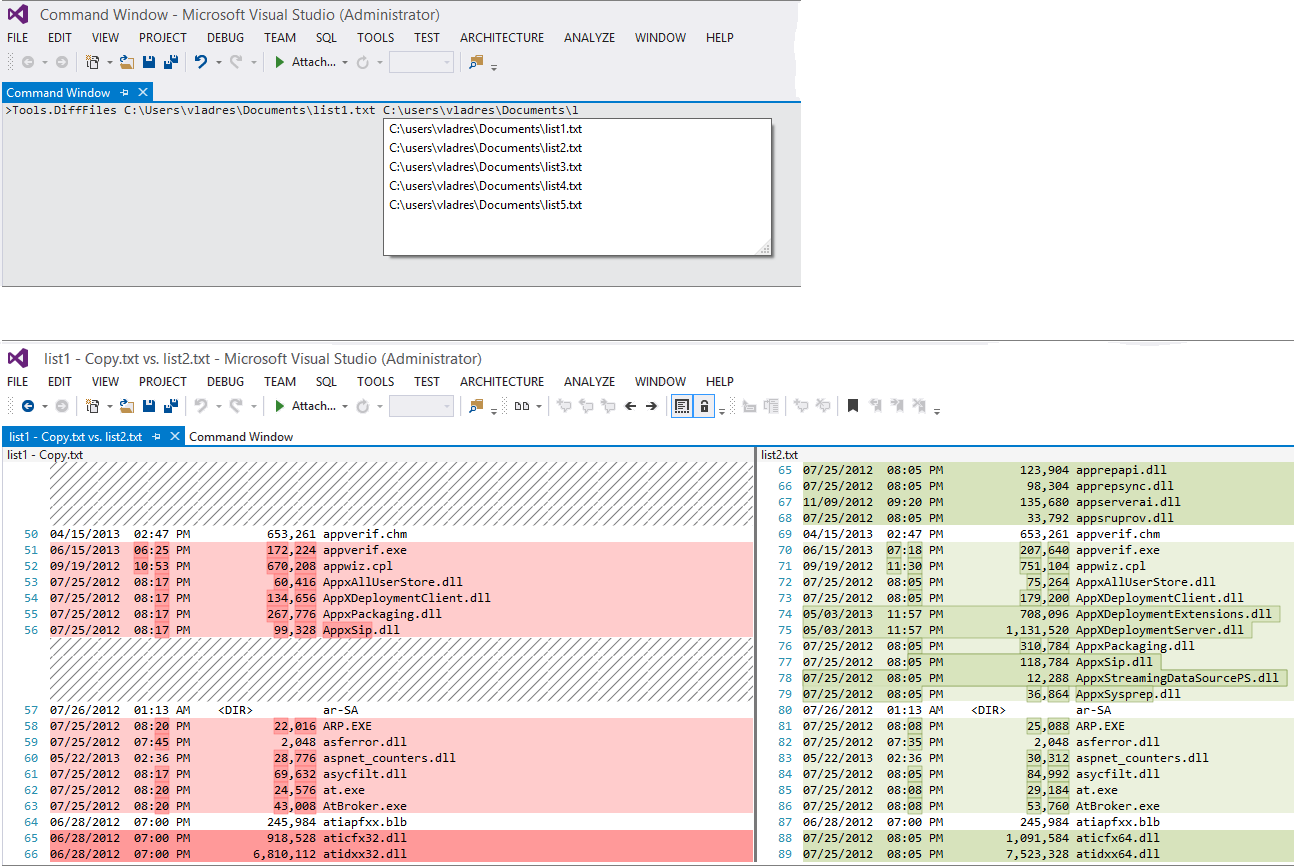 Inspired by the accepted answer above, I found a very comfortable way how you can instantly compare two files with Visual Studio by using drag and drop or via the "Send To" context menu. It only requires a little preparation which you need to do once and then it is useful like a Swiss army knife.

Visual Studio already has everything you need, there are only some configuration steps required to make this working:

You might notice that I have reversed the %1 and %2 parameters in the batch. This is because I noticed that the file explorer passes the 2nd file as first parameter, then the 1st file as second parameter.

Note: It does not harm if Visual Studio is already open. In this case it will just open up a new window within the running instance of Visual Studio. So you can compare multiple file pairs, but please ensure you have selected only 2 files at a time.

Here's an alternative how you can use the batch file VS_FileCompare.cmd mentioned in the section above. It allows to use the context menu's Send To folder to compare the files.

HINT: If you like the SendTo folder approach, there is more you can do - for example you can open a command shell directly via SendTo and it starts with the right path (the path where the selected file resides). Look here fo find out how to do that. You can even combine it with the script to gain elevated rights, with only a little extra effort.

*) Footnote: Because vsPath (the path to DEVENV.exe) differs depending on your version of Visual Studio, I am describing how you can find it out (Windows 10):

You can try VSCommands extension from Visual Studio Gallery. Latest release allows you to select two file and compare them:

I have always been a fan of WinMerge which is an open source project. You can plug it into Visual Studio fairly easily.

will show you how to do this

There is also a Visual Studio extension called CompareFiles, which does nothing else but adding the "Compare Files" entry to the solution explorer context menu. It invokes the built-in Visual Studio diff tool.

Edit: It's now available as a separate extension 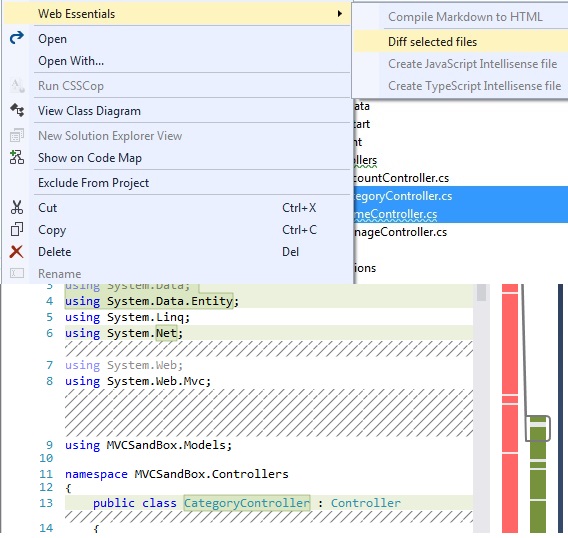 If you have VS installed, you could also call

UPDATED: For VS 2019 File Differ Plugin Allow to compare files in distinct proyects 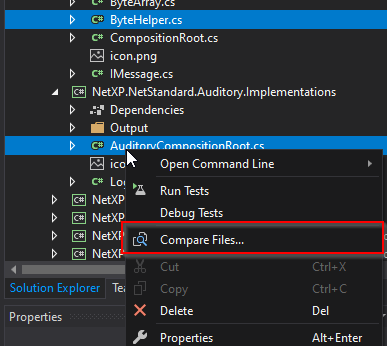 You can install it from here:

OLD: For VS 2017 Install https://marketplace.visualstudio.com/items?itemName=vs-publisher-457497.FileComparer2017

The problem is that you can't compare files in diferent proyects, but you can copy the files in the same project to compare... 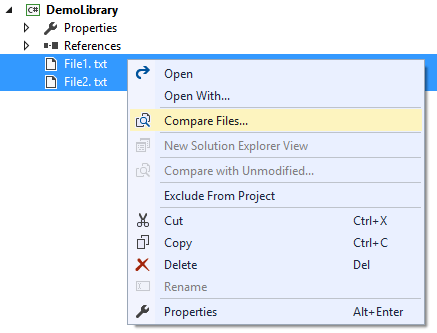 In Visual Studio Code you can:

I had this problem as well. No TFS, but I found this article helpful.

In Visual Studio the Diff can be called using Command Window and then Tools.DiffFiles command

File Comparer VS Extension by Akhil Mittal. Excellent lightweight tool that gets the job done.

To compare any two files and merge it to one file Here are the following steps you can follow if you have visual studio(Any version) installed. 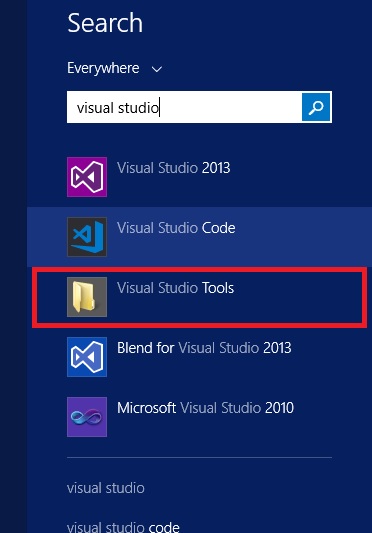 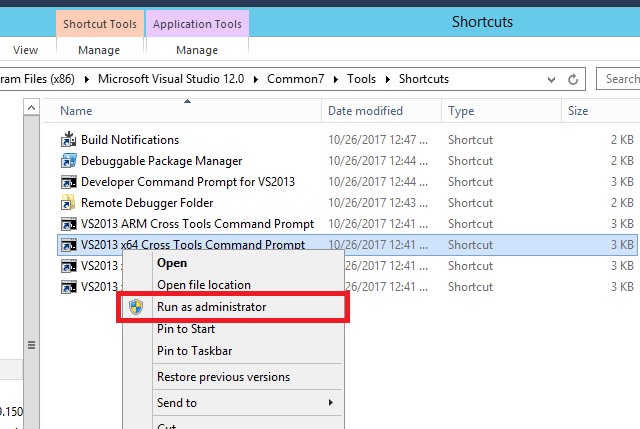 Ignore the switch /m if you need just comparison. 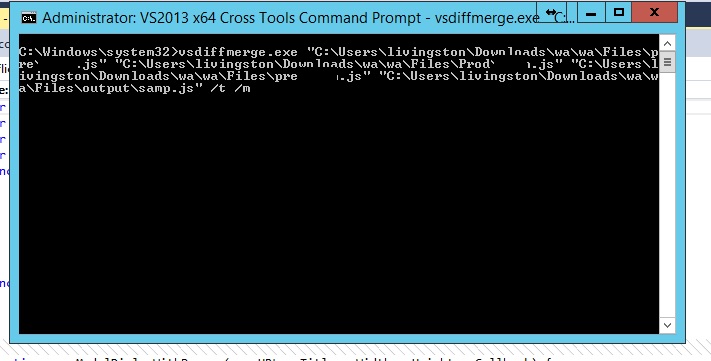 Please note that if file name does not exists in the location, it will not open the comparer.

Also you can beautify the file before you do the comparison. In visual studio Ctrl + K + D.

There are lot of beautifier sites available online.

Visual Studio code is great for this - open a folder, right click both files and compare.

I believe this to be one of the better extension for Visual Studio 2012, it's called Code Compare and can be found here. 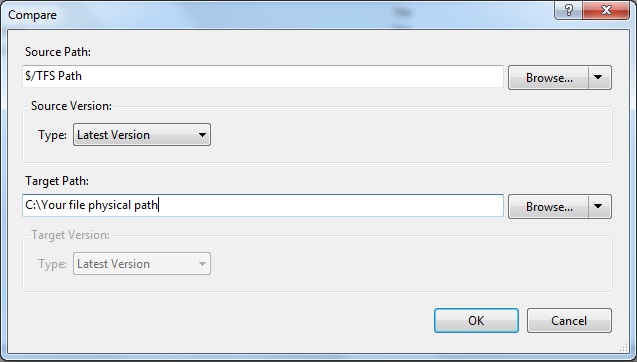 Similarly you can compare folder also which compares all files of a folder at once.

Not the answer you're looking for? Browse other questions tagged visual-studio file compare comparison diff or ask your own question.

231
How can I auto-elevate my batch file, so that it requests from UAC administrator rights if required?
79
Batch Extract path and filename from a variable
12
Opening a Diff in the currently open instance of Visual Studio 2012
12
Using VS2012 diff tool from console
13
Apply failed hunk with TortoiseSVN
6
how to compare two files in visual studio ignoring casing
2
Receiving message of issue with content in Excel File
1
Make our copy of Source Code similar to the Compiled copy of code on Production Server
1
Open two files for comparison
0
Merge two versions of C# projects
See more linked questions

867
Should I add the Visual Studio .suo and .user files to source control?
2251
Compare two dates with JavaScript
2287
How do I show the changes which have been staged?
1169
How to compare a local Git branch with its remote branch
1195
.gitignore for Visual Studio Projects and Solutions
1819
Writing files in Node.js
1209
Difference between Build Solution, Rebuild Solution, and Clean Solution in Visual Studio?
534
Visual Studio debugging/loading very slow
425
Comparing the contents of two files in Sublime Text