Differences between Lodash and Underscore.js [closed]

Ask Question
Asked 8 years, 5 months ago
Active 3 months ago
Viewed 338k times
1655
Closed. This question is opinion-based. It is not currently accepting answers.

Why would someone prefer either the Lodash or Underscore.js utility library over the other?

Lodash seems to be a drop-in replacement for underscore, the latter having been around longer.

I think both are brilliant, but I do not know enough about how they work to make an educated comparison, and I would like to know more about the differences.

Because Lodash is updated more frequently than Underscore.js, a lodash underscore build is provided to ensure compatibility with the latest stable version of Underscore.js.

At one point I was even given push access to Underscore.js, in part because Lodash is responsible for raising more than 30 issues; landing bug fixes, new features, and performance gains in Underscore.js v1.4.x+.

In addition, there are at least three Backbone.js boilerplates that include Lodash by default and Lodash is now mentioned in Backbone.js’s official documentation.

Check out Kit Cambridge's post, Say "Hello" to Lo-Dash, for a deeper breakdown on the differences between Lodash and Underscore.js.

Lodash is inspired by Underscore.js, but nowadays it is a superior solution. You can make your custom builds, have a higher performance, support AMD and have great extra features. Check this Lodash vs. Underscore.js benchmarks on jsperf and... this awesome post about Lodash:

One of the most useful feature when you work with collections, is the shorthand syntax:

If, like me, you were expecting a list of usage differences between Underscore.js and Lodash, there's a guide for migrating from Underscore.js to Lodash.

Here's the current state of it for posterity:

In addition to John's answer, and reading up on Lodash (which I had hitherto regarded as a "me-too" to Underscore.js), and seeing the performance tests, reading the source-code, and blog posts, the few points which make Lodash much superior to Underscore.js are these:

If you look into Underscore.js's source-code, you'll see in the first few lines that Underscore.js falls-back on the native implementations of many functions. Although in an ideal world, this would have been a better approach, if you look at some of the performance links given in these slides, it is not hard to draw the conclusion that the quality of those 'native implementations' vary a lot browser-to-browser. Firefox is damn fast in some of the functions, and in some Chrome dominates. (I imagine there would be some scenarios where Internet Explorer would dominate too). I believe that it's better to prefer a code whose performance is more consistent across browsers.

Do read the blog post earlier, and instead of believing it for its sake, judge for yourself by running the benchmarks. I am stunned right now, seeing a Lodash performing 100-150% faster than Underscore.js in even simple, native functions such as Array.every in Chrome!

Here is a list of differences between Lodash, and it's Underscore.js build is a drop-in replacement for your Underscore.js projects.

IMHO, this discussion got blown out of proportion quite a bit. Quoting the aforementioned blog post:

Most JavaScript utility libraries, such as Underscore, Valentine, and wu, rely on the “native-first dual approach.” This approach prefers native implementations, falling back to vanilla JavaScript only if the native equivalent is not supported. But jsPerf revealed an interesting trend: the most efficient way to iterate over an array or array-like collection is to avoid the native implementations entirely, opting for simple loops instead.

As if "simple loops" and "vanilla Javascript" are more native than Array or Object method implementations. Jeez ...

It certainly would be nice to have a single source of truth, but there isn't. Even if you've been told otherwise, there is no Vanilla God, my dear. I'm sorry. The only assumption that really holds is that we are all writing JavaScript code that aims at performing well in all major browsers, knowing that all of them have different implementations of the same things. It's a bitch to cope with, to put it mildly. But that's the premise, whether you like it or not.

Maybe all of you are working on large scale projects that need twitterish performance so that you really see the difference between 850,000 (Underscore.js) vs. 2,500,000 (Lodash) iterations over a list per second right now!

I for one am not. I mean, I worked on projects where I had to address performance issues, but they were never solved or caused by neither Underscore.js nor Lodash. And unless I get hold of the real differences in implementation and performance (we're talking C++ right now) of, let’s say, a loop over an iterable (object or array, sparse or not!), I rather don't get bothered with any claims based on the results of a benchmark platform that is already opinionated.

It only needs one single update of, let’s say, Rhino to set its Array method implementations on fire in a fashion that not a single "medieval loop methods perform better and forever and whatnot" priest can argue his/her way around the simple fact that all of a sudden array methods in Firefox are much faster than his/her opinionated brainfuck. Man, you just can't cheat your runtime environment by cheating your runtime environment! Think about that when promoting ...

So to keep it relevant:

Choose whatever approach fits your needs the most. As usual. I'd prefer fallbacks on actual implementations over opinionated runtime cheats anytime, but even that seems to be a matter of taste nowadays. Stick to quality resources like http://developer.mozilla.com and http://caniuse.com and you'll be just fine.

I'm agree with most of things said here, but I just want to point out an argument in favor of Underscore.js: the size of the library.

Specially in case you are developing an app or website which intend to be use mostly on mobile devices, the size of the resulting bundle and the effect on the boot or download time may have an important role.

For comparison, these sizes are those I noticed with source-map-explorer after running Ionic serve:

One can use BundlePhobia to check the current size of Lodash and Underscore.js.

I am not sure if that is what OP meant, but I came across this question because I was searching for a list of issues I have to keep in mind when migrating from Underscore.js to Lodash.

I would really appreciate if someone posted an article with a complete list of such differences. Let me start with the things I've learned the hard way (that is, things which made my code explode on production:/):

Underscore vs Lo-Dash by Ben McCormick is the latest article comparing the two:

I just found one difference that ended up being important for me. The non-Underscore.js-compatible version of Lodash's _.extend() does not copy over class-level-defined properties or methods.

I've created a Jasmine test in CoffeeScript that demonstrates this:

Fortunately, lodash.underscore.js preserves Underscore.js's behaviour of copying everything, which for my situation was the desired behaviour.

For the most part Underscore.js is subset of Lodash.

At times, like presently, Underscore.js will have cool little functions Lodash doesn't have, like mapObject. This one saved me a lot of time in the development of my project.

They are pretty similar, with Lodash is taking over...

They both are a utility library which takes the world of utility in JavaScript...

It seems Lodash is getting updated more regularly now, so more used in the latest projects...

Also Lodash seems is lighter by a couple of KBs...

Both have a good API and documentation, but I think the Lodash one is better...

Here is a screenshot for each of the documentation items for getting the first value of an array... 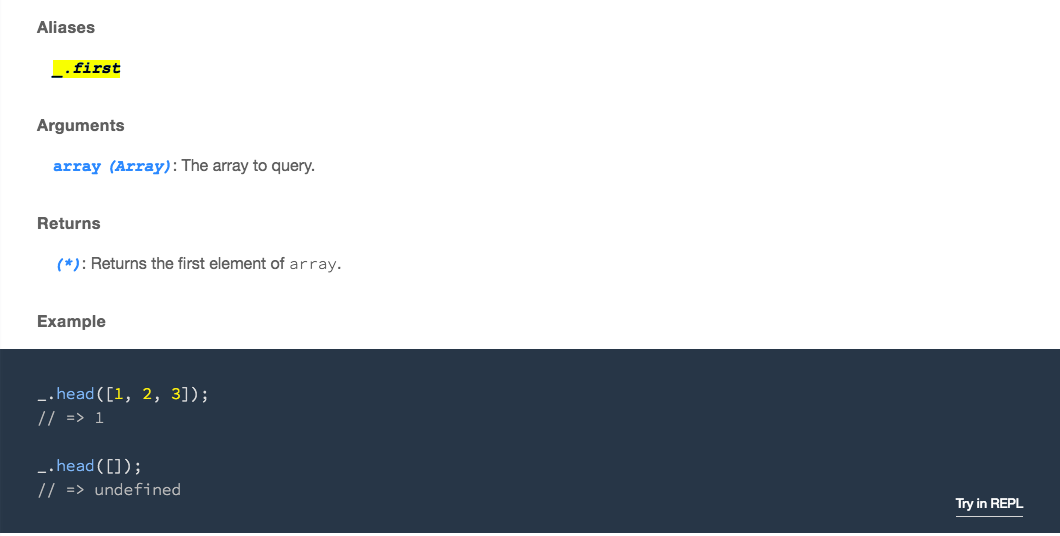 As things may get updated time to time, just check their website also...

Not the answer you're looking for? Browse other questions tagged underscore.js javascript lodash or ask your own question.

1613
How do I check if an object has a specific property in JavaScript?
507
Check whether variable is number or string in JavaScript
488
How to get a key in a JavaScript object by its value?
314
How to check if two arrays are equal with JavaScript?
116
How to Deep clone in javascript
131
How to make ng-repeat filter out duplicate results
82
How do you clone an array of objects using underscore?
53
How to stop lodash.js _.each loop?
41
At underscore js, Can I get multiple columns with pluck method after input where method as linq select projection
20
Error: Failed to instantiate module restangular due to: '_' is undefined
See more linked questions