How to use sbt from behind proxy?

How do I configure sbt to use a proxy?

For example, my build definition needs to connect to GitHub, specifying connection parameters for http.proxy, http.proxyPort, user, and password.

How would I pass in these settings to sbt?

Is there an easy way to switch between proxy/no-proxy settings for when I work from home?

(That's of course, assuming Unix (Linux/OSX etc). On windows you could just set the same environment variable (%JAVA_OPTS%) as usual in the Windows way.)

Then run sbt as usual:

Switching between proxy/no-proxy should be a matter of setting up a little script that you can 'slurp' in whenever you need it.

sbt works in a fairly standard way comparing to the way other JVM-based projects are usually configured.

sbt is in fact two "subsystems" - the launcher and the core. It's usually xsbt.boot.Boot that gets executed before the core starts up with the features we all know (and some even like).

It's therefore a matter of how you execute sbt that says how you could set up a proxy for HTTP, HTTPS and FTP network traffic.

The following is the entire list of the available properties that can be set for any Java application, sbt including, that instruct the Java API to route communication through a proxy:

Replace http above with https and ftp to get the list of the properties for the services.

Some sbt scripts use JAVA_OPTS to set up the proxy settings with -Dhttp.proxyHost and -Dhttp.proxyPort amongst the others (listed above). See Java Networking and Proxies.

Some scripts come with their own way of setting up proxy configuration using the SBT_OPTS property, .sbtopts or (only on Windows) %SBT_HOME%\conf\sbtconfig.txt. You can use them to specifically set sbt to use proxies while the other JVM-based applications are not affected at all.

From the sbt command line tool:

And here comes an excerpt from sbt.bat:

Be careful with sbtconfig.txt that just works on Windows only. When you use cygwin the file is not consulted and you will have to resort to using the other approaches.

The point of the script is to use the latest version of sbt built from the sources (that's why I'm using /Users/jacek/.ivy2/local/org.scala-sbt/sbt-launch/$SBT_LAUNCHER_VERSION-SNAPSHOT/jars/sbt-launch.jar) with $SBT_OPTS property as a means of passing JVM properties to the JVM sbt uses.

The script above lets me to set proxy on command line on MacOS X as follows:

As you can see, there are many approaches to set proxy for sbt that all pretty much boil down to set a proxy for the JVM sbt uses.

In windows environment simply add following line in the sbt/sbtconfig.txt

or the Https equivalent (thanks to comments)

I used (this is a unix environment) :

This did not work for my setup :

But apparently SBT_OPTS is used instead of JAVA_OPTS

To provide one answer that will work for all Windows-users:

If you get the error "Could not find or load main class" you need to set your JAVA_HOME:

Add both http and https configuration:

(https config is must, since many urls referred by the sbt libraries are https)

In fact, I even had an extra setting 'http.proxySet' to 'true' in both configuration entries.

When I added the proxy info to the %JAVA_OPTS%, I got an error "-Dhttp.proxyHost=yourserver was unexpected at this time". I put the proxy info in %SBT_OPTS% and it worked.

Replace yourServer by the proper address without the http:// nor https:// prefixes in Dhttp and Dhttps, respectively. Remember to avoid the quotation marks. No usr/pass included in the code-line, to include that just add -Dhttp.proxyUser=usr -Dhttp.proxyPassword=pass with the same typing criteria. Thanks @Jacek Laskowski!. Cheers

I found an item on the FAQ section of Lightbend Activator useful. I am using Activator, which in turn uses SBT, so not sure if this helps users with just SBT, but if you use Activator, like me, and are behind a proxy, follow the instructions in the "Behind A Proxy" section of the FAQ:

Just in case the content disappears, here's a copy-paste:

When running activator behind a proxy, some additional configuration is needed. First, open the activator configuration file, found in your user home directory under ~/.activator/activatorconfig.txt. Note that this file may not exist. Add the following lines (one option per line):

SBT use both HTTP/HTTPS/SFTP/SSH and other kind of connections to a repository. so when behind a proxy, these protocols should be available.

In most simple cases on Windows, you just need to pass proxy parameters options to JVM, like:

But if not, there are few things you should be aware of:

to solve first, you should pass https proxy parameter to jvm, like:

to solve the second, you should import the ca. there are a lot of tips.

to solve the third, you maybe could considering using a authentication proxy.

to Simplify the config of SBT, it provide sbtconfig.txt and sbtops in the conf directory, look into it.

I found that starting IntelliJ IDEA from terminal let me connect and download over the internet. To start from terminal, type in:

If that is not working then try with JAVA_OPTS (non windows)

if nothing works then set SBT_OPTS

If you are using a Proxy which requires authentication, I have a solution for you :)

As @Faiz explained above, SBT has a very hard time handling proxy requiring authentication. The solution is to bypass this authentication, if you cannot turn off your proxy on demand (corporate proxy for example). To do so, I suggest you use a squid proxy, and configure it with your username and password to access your corporate proxy. See : https://doc.ubuntu-fr.org/squid Then, you can set JAVA_OPTS or SBT_OPTS environment variables so that SBT connects to your own local squid proxy instead of your corporate proxy :

(just c/c this in your bashrc without modifying anything and it should work fine).

The trick is that Squid Proxy does not require any authentication, and acts as an intermediate between SBT and your other proxy.

If you have troubles in applying this advise, please let me know.

For those still landing on this thread trying to find where/how to configure HTTP proxy in IntelliJ, here's how I managed to get it to work for me. I hope this helps!

(Note: specify your network username and password in the corresponding boxes):- 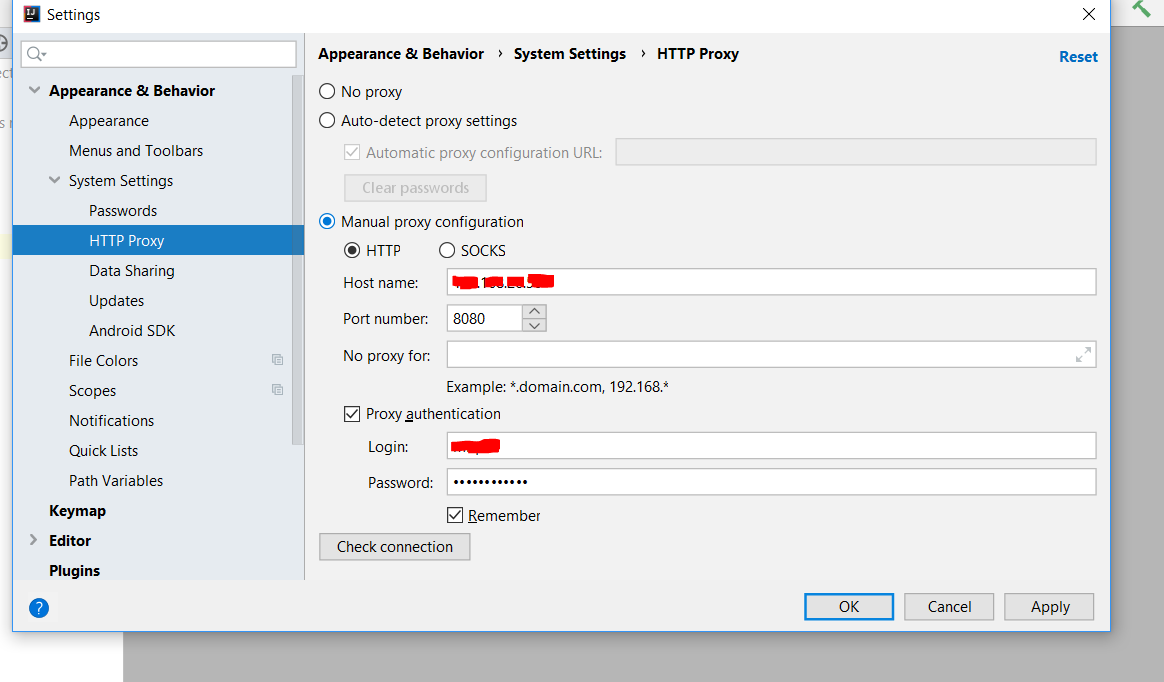 Not the answer you're looking for? Browse other questions tagged sbt or ask your own question.

4
Running sbt offline right after installing the launcher only?
33
Where can I set proxy for SBT in Intellij IDEA?
9
How to use sbt from behind proxy - in windows 7?
4
using SBT for first time - issue retrieving dependencies behind proxy
7
Server access Error: Connection timed out url=https://repo.typesafe.com/typesafe/ivy-releases/org.scala-sbt/sbt/0.13.8/ivys/ivy.xml
5
sbt 0.13.8 windows 7 unresolved dependencies : org.fusesource.jansi
3
Is there an online repository with sbt-maven-plugin?
4
SBT ignores http.nonProxyHosts
2
Unresolved dependencies errors when trying to build self-contained application with Scala + Spark
3
SBT can't resolve dependencies through proxy
See more linked questions