So I am not experienced in dealing with a plethora of file types, and I haven't been able to find much info on exactly what .sh files are. Here's what I'm trying to do:

I'm trying to download map data sets which are arranged in tiles that can be downloaded individually: http://daymet.ornl.gov/gridded

So, what exactly am I supposed to do with this code? The website doesn't provide further instructions, assuming users know what to do with it. I'm guessing you're supposed to paste the code in to some other unmentioned application for a browser (using Chrome or Firefox in this case)? It almost looks like something that could be pasted in to Firefox/Greasemonkey, but not quite. Just by a quick Google on the file type I haven't been able to get heads or tails on it.

What is a file with extension .sh?

It is a Bourne shell script. They are used in many variations of UNIX-like operating systems. They have no "language" and are interpreted by your shell (interpreter of terminal commands) or if the first line is in the form

they will use that particular interpreter. Your file has the first line:

and that means that it uses Bourne Again Shell, so called bash. It is for all practical purposes a replacement for good old sh.

Depending upon the interpreter you will have different languages in which the file is written.

Keep in mind, that in UNIX world, it is not the extension of the file that determines what the file is (see "How to execute a shell script" below).

If you come from the world of DOS/Windows, you will be familiar with files that have .bat or .cmd extensions (batch files). They are not similar in content, but are akin in design.

How to execute a shell script

Unlike some unsafe operating systems, *nix does not rely exclusively on extensions to determine what to do with a file. Permissions are also used. This means that if you attempt to run the shell script after downloading it, it will be the same as trying to "run" any text file. The ".sh" extension is there only for your convenience to recognize that file.

You will need to make the file executable. Let's assume that you have downloaded your file as file.sh, you can then run in your terminal:

chmod is a command for changing file's permissions, +x sets execute permissions (in this case for everybody) and finally you have your file name.

You can also do it in your GUI. Most of the time you can right click on the file and select properties; in XUbuntu the permissions options look like this: 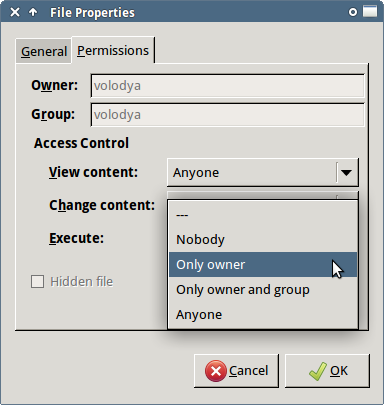 If you do not wish to change the permissions, you can also force the shell to run the command. In the terminal you can run:

The shell should be the same as in the first line of your script.

How safe is it?

You may find it weird that you must perform another task manually in order to execute a file. But this is partially because of a strong need for security.

Basically when you download and run a bash script, it is the same thing as somebody telling you "run all these commands in sequence on your computer, I promise that the results will be good and safe". Ask yourself if you trust the party that has supplied this file, ask yourself if you are sure that you have downloaded the file from the same place as you thought, maybe even have a glance inside to see if something looks out of place (although that requires that you know something about *nix commands and bash programming).

Unfortunately apart from the warning above I cannot give a step-by-step description of what you should do to prevent evil things from happening with your computer; so just keep in mind that any time you get and run an executable file from someone you're actually saying, "Sure, you can use my computer to do something".

If you open your second link in a browser you'll see the source code:

So it's a bash script. Got Linux?

In any case, the script is nothing but a series of HTTP retrievals. Both wget and curl are available for most operating systems and almost all language have HTTP libraries so it's fairly trivial to rewrite in any other technology. There're also some Windows ports of bash itself (git includes one). Last but not least, Windows 10 now has native support for Linux binaries.

sh files are unix (linux) shell executables files, they are the equivalent (but much more powerful) of bat files on windows.

So you need to run it from a linux console, just typing its name the same you do with bat files on windows.

Typically a .sh file is a shell script which you can execute in a terminal. Specifically, the script you mentioned is a bash script, which you can see if you open the file and look in the first line of the file, which is called the shebang or magic line.

I know this is an old question and I probably won't help, but many Linux distributions(e.g., ubuntu) have a "Live cd/usb" function, so if you really need to run this script, you could try booting your computer into Linux. Just burn a .iso to a flash drive (here's how http://goo.gl/U1wLYA), start your computer with the drive plugged in, and press the F key for boot menu. If you choose "...USB...", you will boot into the OS you just put on the drive.

How do I run .sh scripts?

Give execute permission to your script:

chmod +x /path/to/yourscript.sh And to run your script: 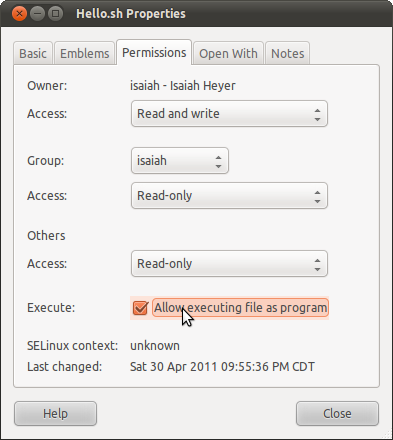 open the location in terminal then type these commands 1. chmod +x filename.sh 2. ./filename.sh that's it

128
Is there a way to run Bash scripts on Windows?
0
How can I automate a python program that requires two inputs in a linux command line?
0
Installing Context broker GE in Fiware
-3
How to run in vbscript an .sh file, or how to execute shell script in vbscript?

1391
How to redirect output to a file and stdout
1890
Looping through the content of a file in Bash
868
open() in Python does not create a file if it doesn't exist
956
How to get full path of a file?
674
How to read a file into a variable in shell?
2
Limit Download connections Apache
960
Exploring Docker container's file system