Does anybody know is it possible to open some personal picture when emulator camera starts?

I have an application which is based on image analysis and I would like when I click a button for camera that camera opens not that default Android emulator moving image. I want it to open some image which I set as a default image. So when I choose to take a picture it will show only that image and when I take a take a picture, that image will be saved to gallery, not Android default image.

Under Tools > AVD Manager, select the "pencil" to get to "Virtual Device Configuration". Show Advanced Settings > Camera will give you the option of using emulated, or a device:

If all you need is to get a still image into the camera, starting with Android Studio 3.2 you can put your static images into the virtual scene:

as discussed in this entry from Android developers blog. Note that you'll need to move the camera position into the dining room to see your images (turn around and use Alt-w to move forward).

Now you have a texture just in front of camera-default-position. 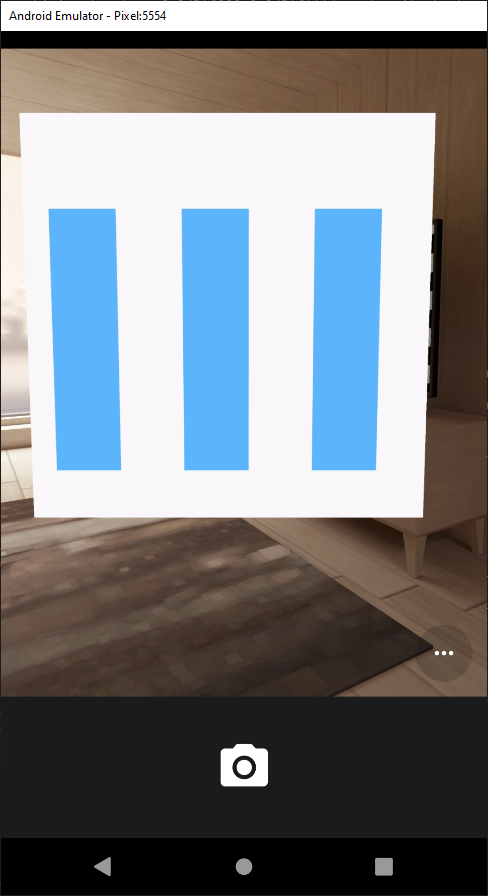 The best way use the OBS. this project creates a virtual webcam and you can play videos or show picture.

Step 1: Download the OBS Studio from this site and create a virtual webcam and add a video for plying that. 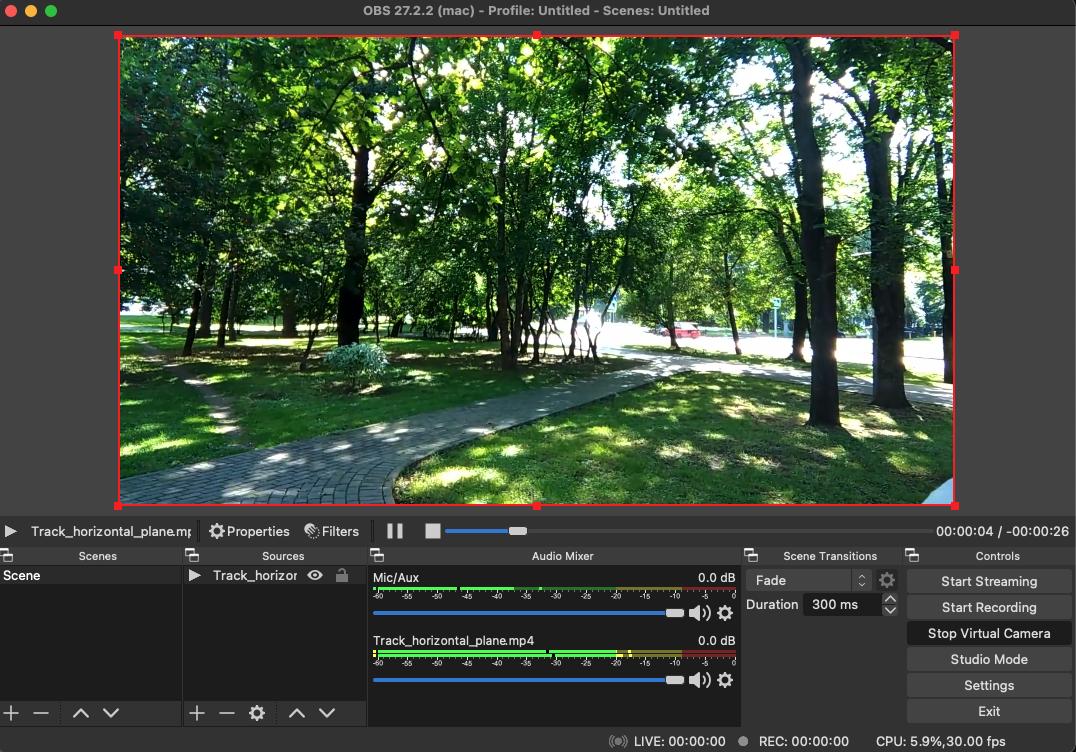 Step 2: Changing the config in android AVD. change front and back camera to webcom0. 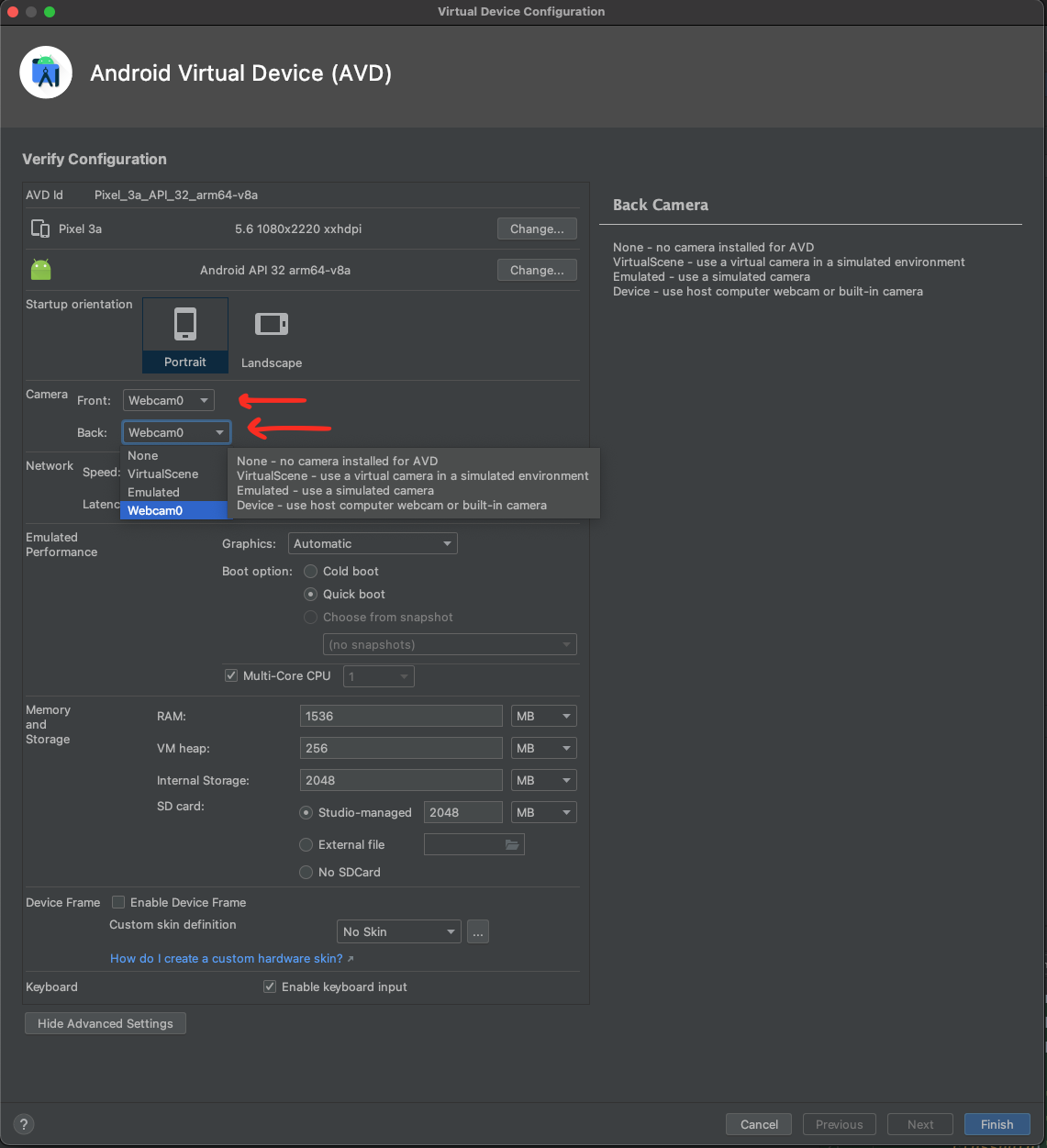 On Mac OS, ensure that the emulator runs in Standalone mode.

You can check this at: Preferences > Tools > Emulator, See image below (Launch in tool window should be unticked as shown below): 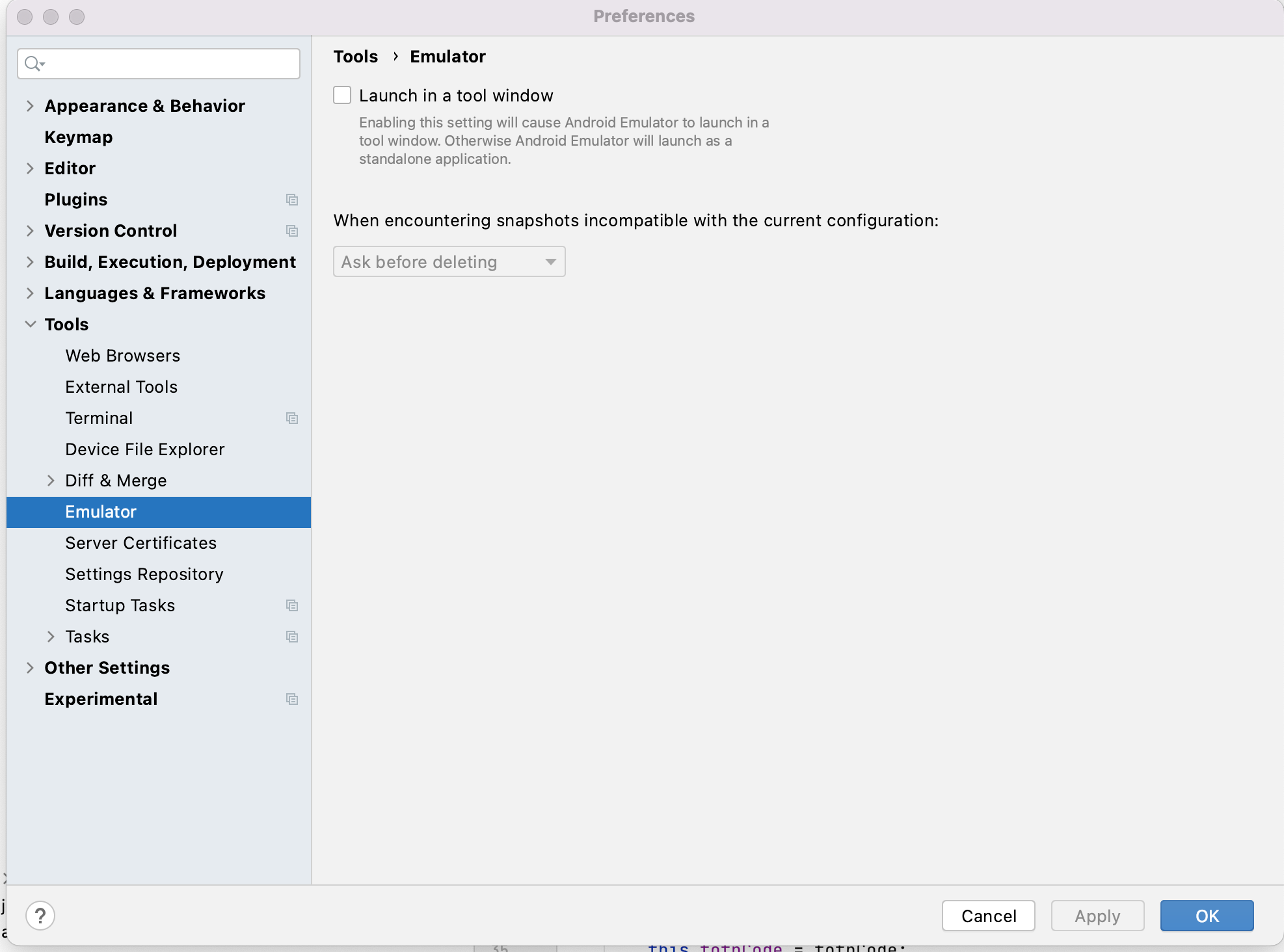 You can then launch the emulator and under the Camera extended control, upload your desired image, in my case, a QR code. 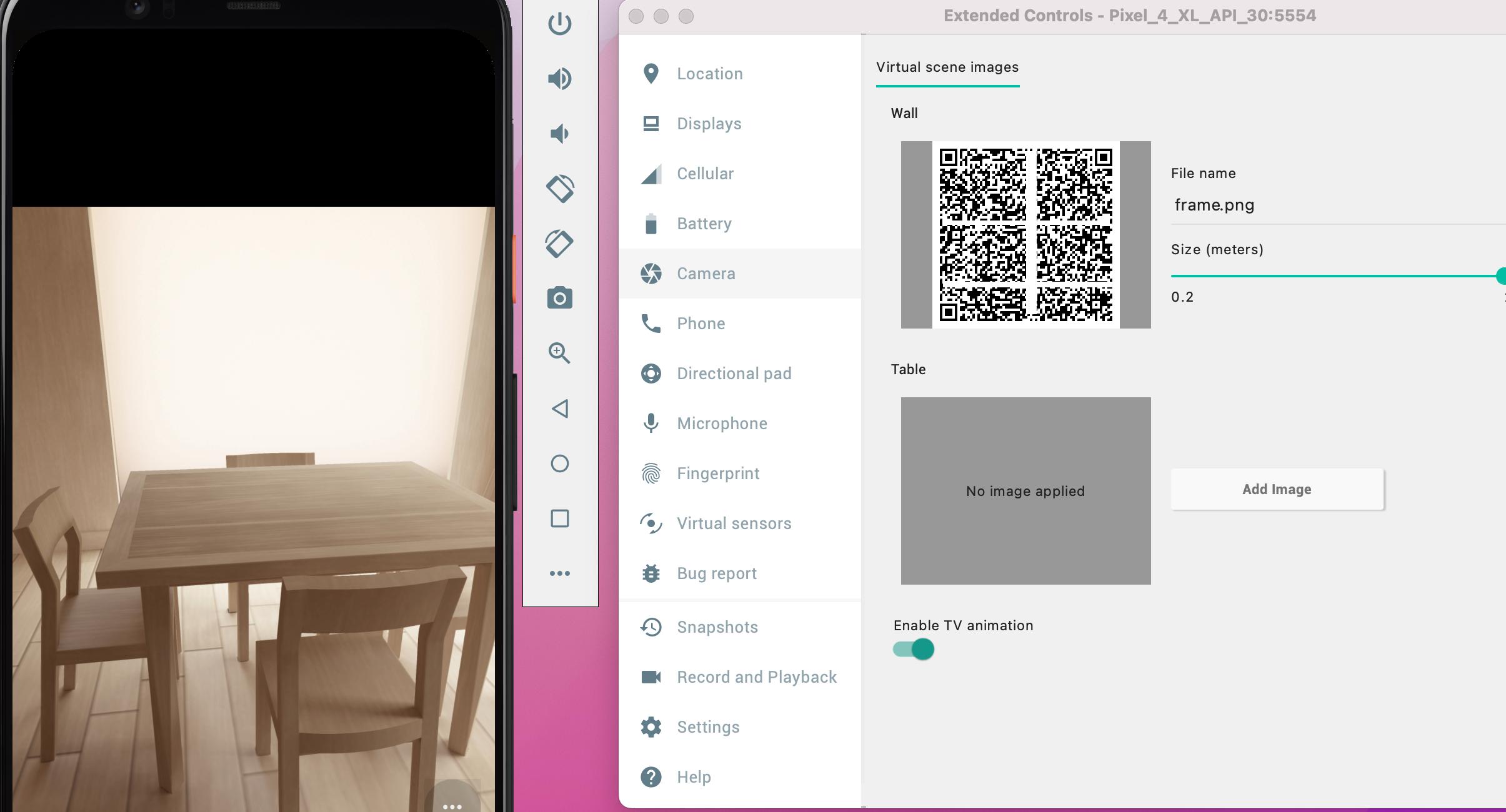 Finally, using the option key on Mac / Alt on Windows + QWEASD + Mouse, you can navigate the camera around the room and find your image (in my case the QR code) as shown below: 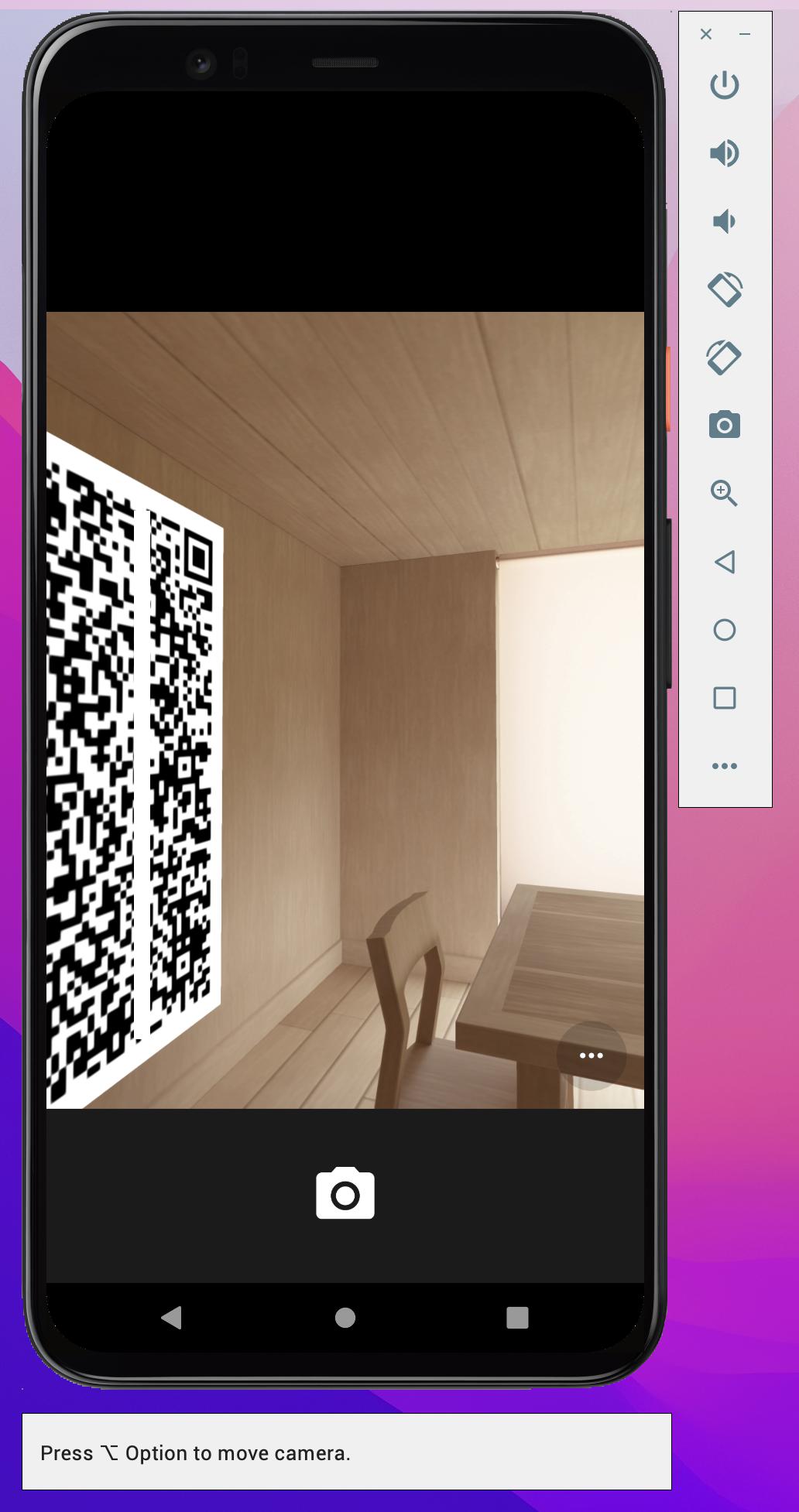 Adding here as I've been troubleshooting an issue for the past day and eventually found a solution that could help others. (On MacOSX, using Android Studio Emulator)

If the camera app shows an error and you cannot see the OBS virtual device even after following the above steps, the solution that worked for me is to reset camera access permissions. It turned out for me that the emulator had previously requested access to the camera from the system whilst the built in webcam0 was the camera source for the avd. The emulator needed permission to use the virtual device webcam1 from the system, but would not request it again as it already had permission for the built in camera webcam0. This caused an error when opening the camera app in the emulator as it could not access the source.

After resetting the camera permissions, start the emulator again using step 4 above, and when opening the camera app, you should be prompted by the mac system to allow camera access to Android Studio, give it access and then you should see the OBS virtual camera input as expected.

Note: I found after running the emulator through the command line once, you can then run the emulator normally and the camera settings will persist.

Download the source from following url . This is work as the another Gallery in the emulator. While passing intent to capture image from camera choose this gallery. this is looks like samsung mobile 3d gallery.. this will return the default images.. in emulators . one more thing it will work fine after 3.0 versions only.

It seems the only solution is to use a remote camera.

This is one way to do it: http://www.tomgibara.com/android/camera-source

It's not something what I was looking for but I think it can be used for testing. Maybe even barcode scanner would work with this if the barcode is placed properly in front of camera.

75
Using Camera in the Android emulator
10
Android emulator settings no camera option (for virtual scene)
4
How to send a static image when camera opens up for android (fake-the-camera-feed-with-a-file)
2
How can I send a virtual camera to Genymotion or Android Studio Emulator in Ubuntu?
3
Need help navigating the virtual scene programmatically on emulator
2
How can I test a reactnative app on ios from windows?
2
How can I change emulator virtual scene in real time?
0
Android AVD with 'emulated' camera shows no camera at all
0
google.mlkit code never executes .addOnSuccessListener() and .addOnFailureListener()
1
Is there a way to set the starting position of the virtual scene in Android AR emulator?
See more linked questions

1384
Strange OutOfMemory issue while loading an image to a Bitmap object
2065
How to lazy load images in ListView in Android
4276
How to close/hide the Android soft keyboard programmatically?
1240
Is quitting an application frowned upon?
3038
Is there a unique Android device ID?
1530
How can you get the build/version number of your Android application?
3960
Proper use cases for Android UserManager.isUserAGoat()?
301
ERROR Android emulator gets killed in Android Studio