I'm working on a SOA project based on SOAP. Well, i read many tutorials on Internet, but i still have the same problem, which is all articles & blogs, even the official documentation of eclipse told you how to use the IDE assistant or such APIs & frameworks (e.g : JAX-WS, CXF) to create a web service and gives you as bonus some definitions of SOAP, WSDL & UDDI, but none of them explained how an SOA works, the process of publishing & deploying a WS is done & how the C/S req/resp process of invoquing a distant web service is done using all these entities SOAP, WSDL & UDDI and the other files which exist in a SOA project (XML files & java files). I have read many e-books but still don't understand how SOA works. pliiiz i need your help guys, i'm really disturbed & confused. Many thanks in advance.

Don't get too hung up on that term Service Oriented Architecture (SOA) as its really more of a marketing term that describes a well-known and practiced software development methodology of making programs into specialized components that can be reused across a broad range of applications. It can also describe applying this software development methodology to business process modeling where business units and workflows are modularized and looked at as individual services rather than monolithic processes that exist in a bubble, and some call this different but related application of the concept Service Oriented Modeling.

While SOA shares a lot in common with modularization, it also adds the requirement that your separate code modules not only inter-operate and integrate (i.e. work well together with) each other, but potentially with everyone else's code in the world, and also that they are available over some well-defined mechanism.

An SOA "purist" might tell you that for your software to be "SOA-compliant" (note: that's not a real thing as there's no single set of rules or governing body on services) that you need to write it as a SOAP Web Service, publish and maintain a WSDL which can act as a contract between you and any implementing parties, and follow the relevant WS-* specs. However, in reality REST and other lightweight modularization/integration/reusability approaches are just as much in line with the concept of SOA.

If you did want to become an "expert" in SOA then read through every word of the following specs:

(those are just some of the most important WS-* specs, see full list here)

Then read every page of the following essential SOA books:

However, I don't actually advise that as there's way too much reading material. What I would suggest though, is that you use them as a reference as you code your own programs following an SOA methodology and notice that in a specific area, a reference manual on what to do next would come in handy. Practice makes perfect and you'll really learn a lot more from working with real-world examples than from reading books and learning everything about the standards and theory. As you mentioned, start with the overly-simplistic JAX-WS and JAX-RS Web Service examples that come out-of-the-box with IDEs like NetBeans or Eclipse, then try some examples that come with popular SOA frameworks like CXF, Axis2 or RESTlet.

In general, as you are writing code constantly ask yourself if your code is:

There are lots of other questions and criteria that people may use, but IMHO these are the most important.

Looking at SOA as a set of this or that technologies is wrong. I also don't agree that SOA is just a marketing term, though it did get bad reputation and was muddled down by marketing and hype.

Service Oriented architecture is an architectural style. as in a blueprint for an architecture that possets constraints on how and what services should be asa well as define a set components and defines their interactions. The diagram below shows SOA vs. REST and you can see that they are derived from some common styles (e.g. they both build on client/server) but also arrive from different styles where SOA builds on pipe and filters and REST does't (you can build RESTful SOAs but you have to work harder :)) 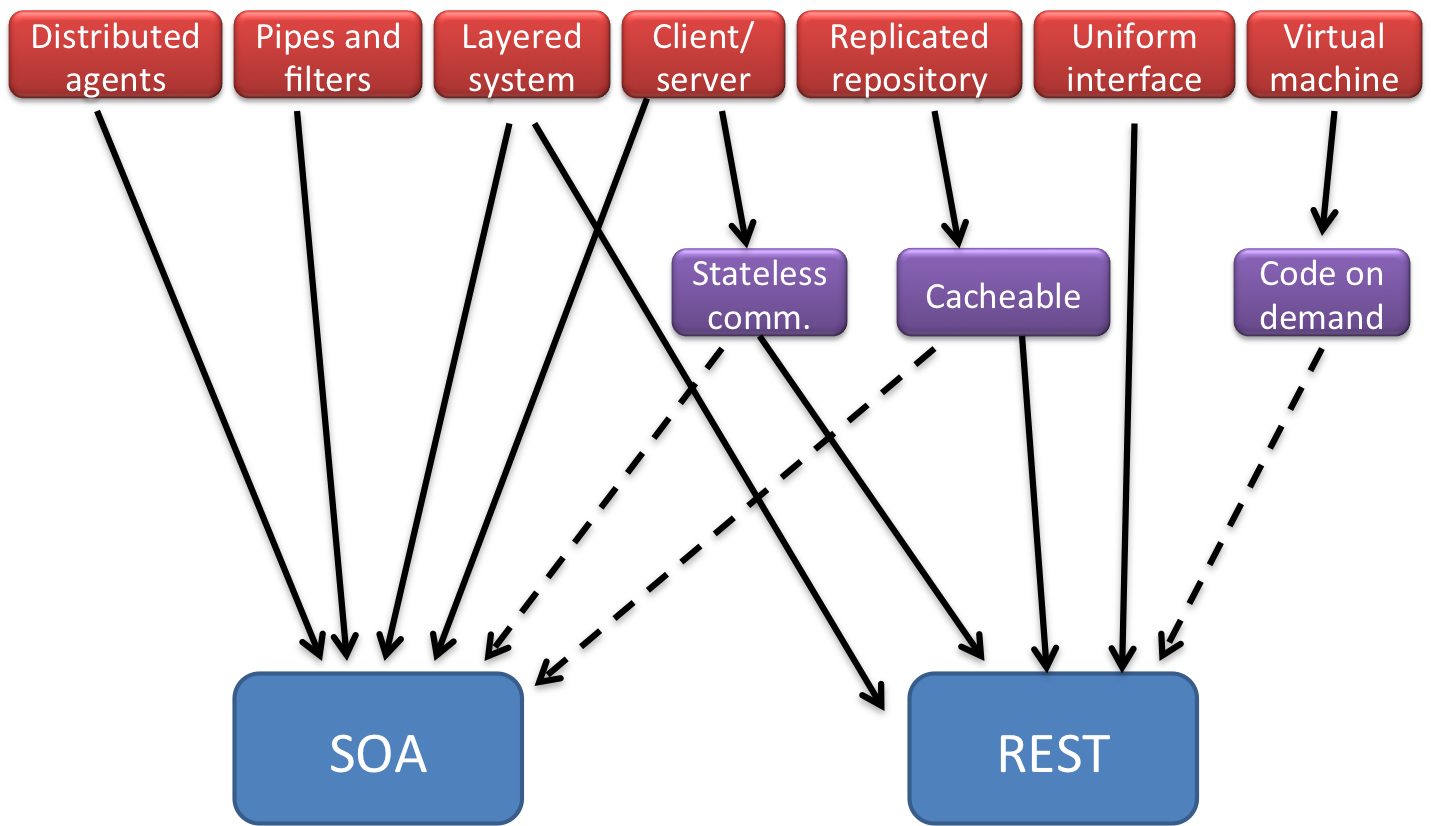 Building services with well defined boundaries & good granularity (that's the tricky part) lets you compose services in a flexible way that lets you implement business capabilities faster. Pardon me for banging my own drum but you can read more on what's SOAand REST vs. SOA in chapter 1 and chapter 10 of my book on SOA patterns

Not the answer you're looking for? Browse other questions tagged web-services soap wsdl soa uddi or ask your own question.

627
Understanding REST: Verbs, error codes, and authentication
2
What C or C++ tool is used to automatically generate WSDL in SOA project?
14
What are some good alternatives to a UDDI registry?
3
Soap client service using java without WSDL - How to?
1
publishing and discovering REST web services
0
Java web services doubts
6
How do I enable "JAX-RPC Web Services" plugin in NetBeans 8.0
0
Consuming SOA Suite WSDL SOAP
0
How do you generate a SOAP 1.2 WSDL with Enunciate?
0
Accessing a SOAP service URL from a Clients point of view