From Windows 8 to Windows Server 2012 (IIS 8) with Web Management Services installed and working, I can use IIS Manager on W8 box to manage the remote server but I get a 404.7 from WMSvc when I execute the following command:

I've tried all sorts of combinations and parameters. I can telnet to that port, I know its open.

I'm just removing the Management Service feature from Windows and restarting. I will pour myself a scotch and make some snacks. In the meantime, if you have any ideas, please share.

Join my live blog below and follow the action.

With Management Service removed, I now get

Error: Unable to connect to the remote server Error: No connection could be made because the target machine actively refused it 192.168.2.22:8172 Error count: 1.

Where the 2nd line is a new message! Woohoo.

Okay, so things are going from bad to worse now. Since reinstalling, the remote IIS console will alert on the certificate and then say,

The server is not accepting remote connections.

But I think this is because I probably didn't re-enable Remote Management, on top of installing the damned thing.

With Remote Management enabled, the remote IIS works again but the 404 has returned. Just in the interests of SEO, here's the full error:

Tried the same command against another web server over a VPN to a client and that works a charm! Looks like IIS is fubar'ed on my absolutely spanking new 2012 build.

I enabled failed request tracing for WMSvc and have seen that the 404.7 comes from the RequestFilteringModule module. 404.7 is 'File Extension Denied' according to the documentation.

Adding an explicit server rule for .axd files does not help though. Interesting to see this module though since it imposes restrictions on URL length and content sizes. Can you imagine troubleshooting this in an IIS hosted WCF app! Haha. I'm crying really.

I'm removing Request Filtering which means removing ASP.NET and various other things also. They need a Reinstall Windows Features & Dependencies All In One Hit Because We Write Unreliable Software option.

I reinstall everything and then some Aussie named Richard appears out of nowhere and totally explains that Web Deploy isn't actually a part of WMSvc as standard, even on IIS 8, and that I need to install Web Deploy.

So I do. Then I disable MsDepSvc which is the other part it installs (which I thought was the entirety of Web Deploy) because it sucks on port 80 and stops load balancers from seeing a downed IIS service.

And it works. I can go to bed.

Have you installed Web Deploy on the server? Web Deploy registers a handler (/msdeploy.axd) with WMSVC, so a 404 would be the expected status code if it weren't installed.

In case someone else is having the same issues than what I am having, I also got the same 404 error. The quickest way I found to check was to go on the server itself, and open up "https://<servername>:8172/MsDeploy.axd". Chrome & Firefox just showed a blank page, so I had to use the Network tab of the developer tools (F12) to see the actual 404 error message.

Somehow, while installing Web Deploy 3.0 from the Web Platform Installer, the IIS 7 Deployment Handler didn't get installed, even though the IIS Manager UI Module did. In my case, I downloaded the Web Deployment Tool Installation .msi from the following link: Web Deployment Tool Installation. Then I had to go back to IIS Admin Tool (Start -> Run -> inetmgr.exe) > {server name} > click on Management Service icon, and restart the management service before the MsDeploy.axd handler started working. 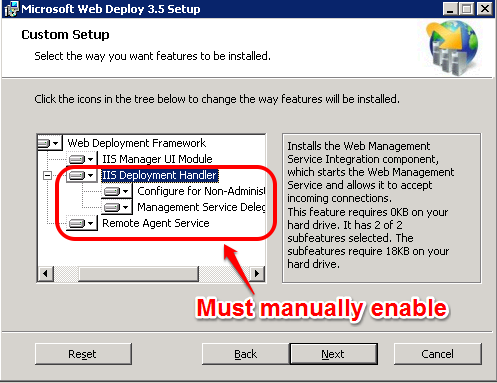 I was stuck getting deploys working. Had installed Web Deploy 3.5 -> Enabled Management Service Delegation -> Ensured Services were started. The problem was the IIS Deployment handler had not been installed. Going through Web PI 4.6 I was not given the opportunity to install the IIS deployment handler. You need to go into the control panel -> Programs and Features Change Web Deploy 3.5's installation. Please note my instructions. In the change process it indicates all the sub packages will be installed but the text message says 0 of 3 sub components will be installed. One of those components is the IIS handler. Read carefully because I didn't and was frustrated :)

One important point I think is that you have to turn on the Management service first and then install Web Deploy.

I did it the other way around and it didn't work.

Only by reinstalling Web deploy did it start working.

When I installed Web Deploy via the web platform installer the Handler was not selected. I had to manually install Web Deploy 3.0, click"change" and then select the Handler to be installed.

After hours of searching, doing your solution below worked for me !!

In my case, when installing the web deploy 3.0 package through the web pi i never got the Management Service Delegation option in IIS /home .. reinstalling it rectified the issue however, thus resolving Resolved my 404.7 error.

This was under Microsoft Server 2012 and IIS8

Edit: I just recently tried the very same thing on Windows 8 and would like to point out that the microsoft website states:

You cannot set up remote publishing using Web Deploy for a site that is hosted in IIS on Windows 8.0 or 8.1. The reason is that the client SKUs for Windows do not come with the Web Management Service that is required for remote connections. As a result, on Windows 8.0 or 8.1, the IIS Manager Permissions icon and the Configure Web Deploy Publishing deployment option that are required to configure remote publishing are not available in the IIS Manager. http://www.iis.net/learn/install/installing-publishing-technologies/installing-and-configuring-web-deploy-on-iis-80-or-later#00

(Yes i realize the target is Server 2012 in the question but this could save a lot of people from having the same headache as me, since this worked just fine on my old dev machine i wanted to let people know.)

Rather than using Web Platform Installer. Download the WebDeploy.exe from the website and install it on server with Complete package option.

It will fix the issue.

I also had the problem of Visual Studio (2013) couldn't update the app on my server (Windows 2012 R2 IIS 8.5). I added the components manually as described above, but that didn't solve the problem. Then I found this article.

It basically says that the Web Management Service is logged on as Local Service which doesn't have access rights to the Inetpub directory. Granting permissions for Local Service solved the problem for me.

I have got the same issue. I resolved this by "Restart-Service wmsvc".

This issue still exists in server 2019 as well. Need to install web deployed in the correct sequence

Used only windows auth. Web deploy 3.5. And only the WMSVC certificate which is set in the Management Service icon of the top level server icon.

Not the answer you're looking for? Browse other questions tagged iis msdeploy iis-8 or ask your own question.

65
Visual Studio 2010 Web deployment task failed
15
MSDeploy.exe can connect as Administrator, but not any other Windows account
8
Why does the Web Deploy Agent Service listen on port 80 and 8172
0
404 error ASP.NET MVC application hosted on IIS 8.5
0
Web Deploy Handler 404 error