Is there a way to force Xcode to trim trailing whitespaces when I save file?

You can create a script and bind it to a keyboard shortcut:

Then enter the following script:

Starting from Xcode 4.4 whitespaces will be trimmed automatically by default, unless the line is all whitespace. You can also activate Including whitespace-only lines to fix this, which is not active by default. 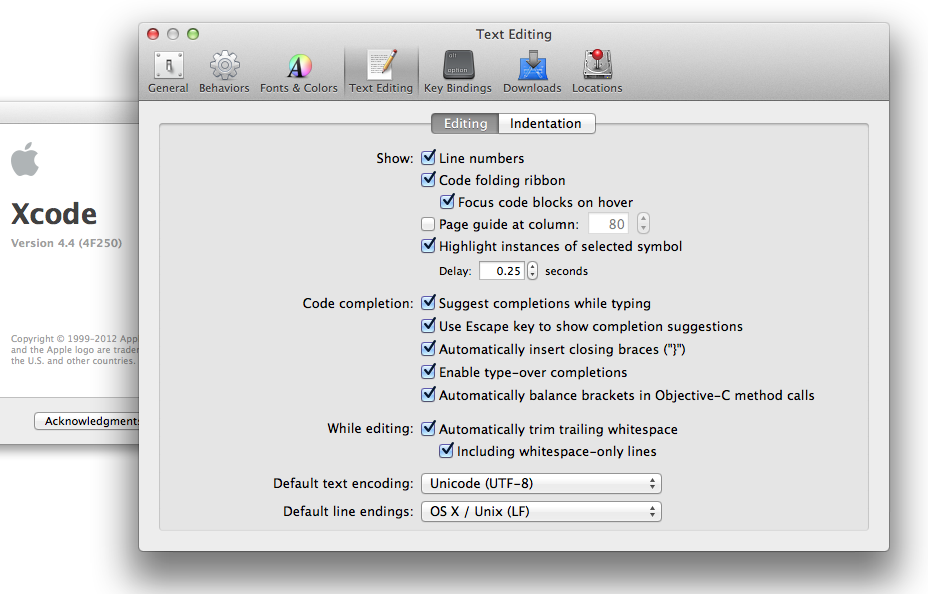 For Xcode 8, I installed the swimat Xcode plug-in, for formatting Swift code, which removed all trailing spaces and whitespace-only lines.

Once installed, you can run Swimat in Xcode via Editor -> Swimat -> Format.

This is not possible in Xcode 3.2

I answered this question so briefly because there's no way to do this properly.

Of course, since it's software, you can do anything: Starting with Input Manager hacks or other ways of code injection to system wide keyboard interception, you can alter your local system to do anything anytime. You could set up an Applescript folder action (arrgh) or use a launch demon and the FSEvents facility to watch your source code files.

You can also add a couple of scripts to Xcode (user scripts in the menu, script phases in targets, custom Actions in the organizer, there's even the very unknown possibility a startup script), but all these solutions are flawed, since it involves the user or custom setup on the user's machine.

I'm not aware of a solution which simply works after checking out a project from SCM. I believe that there's need for this and similar customization scripts, so I filed a bug (radar 7203835, "Feature: more user script triggers in Xcode workflow"). I did not receive any feedback yet.

Here's the full text of the radar entry:

It would be useful to have more places to run scripts in Xcode.

The best and easy way without using scripts, hacks and much more. Just go to Find And Replace and press alt/option + space and press space button in the replace bar and then click on replace all. It will replace the whitespaces with normal spaces and the warning/ error will be gone !!

Not the answer you're looking for? Browse other questions tagged xcode editor trim developer-tools or ask your own question.

3
Git diff: How to ignore starting space of an empty line?