I'm getting behaviour I don't understand when saving environments. The code below demonstrates the problem. I would have expected the two files (far-too-big.RData, and right-size.RData) to be the same size, and also very small because the environments they contain are empty.

In fact, far-too-big.RData ends up the same size as bigfile.RData.

Both far-too-big.RData and right-size.RData, when loaded into a new R session, appear to contain nothing. ie they return character(0) in response to ls(). However, if I switch the saves to include ascii=TRUE, and open the result in a text editor, I can see that far-too-big.RData contains the data in bigfile.RData.

This is not my area of expertise but I belive environments work like this.

The result of the above in your case is:

So when saving test you also save a (somewhat hidden) copy of the object a. This does not happen when you save test1 as it does not include the object a. 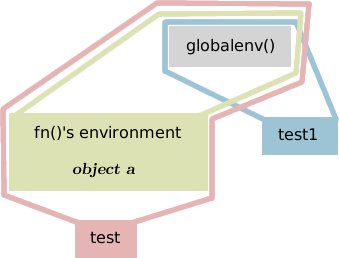 Apparently this is a more complicated topic than I used to believe. Although I might just be quoting @joris-mays answer now I'd like to take a final go at it.

However, the take home message is as Joris already stated: save your objects as lists and you don't need to worry. 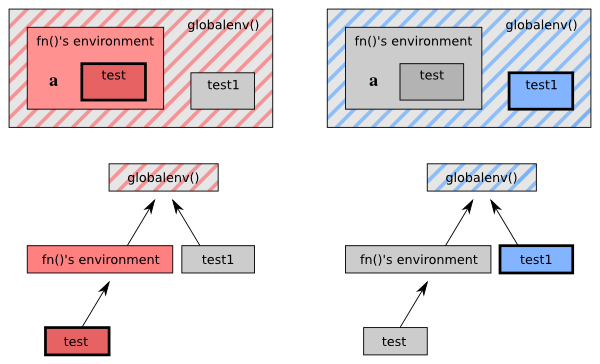 If you want to know more I can recommend Norman Matloff's excellent book the art of R programming. It is aimed at software development in R rather than primary data analysis and assumes you have a fair bit of programming experience. I must admit I haven't fully digested the environment part yet, but as the rest of the book is very well written and pedagogical I assume this one is too.

Environments behave different from other objects in R, in the sense that they don't get copied when passed to functions or used in assignments. The environment object itself consists internally of pointers to :

The fact that an environment contains pointers, makes all the difference. Environments are not all that easy to deal with, they're actually very tricky. Take a look at the code below :

Note the difference between an enclosing environment and a parent frame: Say we define our functions a bit different :

Now we have the following situation :

On the other hand, if we do the following:

test2 is now enclosed in two environments (being test and the environment of fun), and both environments are saved in the file as well. So you get this situation :

Regardless of this, I personally avoid saving environments as environments, because there are more things that can go wrong. In my opinion, saving an environment as a list is in 99.9% of the cases the better choice :

If you need it to be an environment, you can convert it back when loading.

2
How to save a data.tree in R?
3
Memory discrepencies between R workspace and on disk for same object

326
How to Correctly Use Lists in R?
8
RandomForest for Regression in R
4
R: Strange behavior while saving list() with save() from function output
1
Reading large text file with double pipe delimiters
5
Saving a single object within a function in R: RData file size is very large
0
Read in large text file in chunks
2
Identifying outliers in different groups
2
How to align images in R Shiny?
4
Why inclusion of external Rmd-file with latex equation environment leads to different DOCX output while using rmarkdown and bookdown?