How to fix SSL certificate error when running Npm on Windows?

When I try to install a package with npm, it doesn't work. After a long wait, I eventually get an error 'tunneling socket could not be established, sutatusCode=403'.

However, when I browse to that same URL in my web browser (Google Chrome) it loads fine (see footnote). https://registry.npmjs.org/coffee-script

I believe the problem relates to SSL certificates, because if I download that URL with wget, I get an explicit error about certificates

How can I fix this? Without compromising security.

I used to get SSL certificate errors in my web browser too, until I installed the 'npmCA' certificate as a 'trusted root certification authority' in Control Panel's Internet Options (screenshot 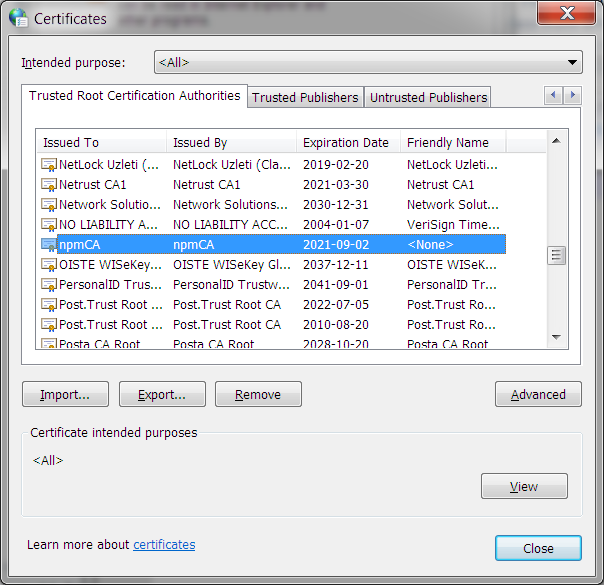 Edit: I tried an insecure workaround per https://npmjs.org/doc/config.html#strict-ssl

Yet it still times out with the same error

TL;DR - Just run this and don't disable your security:

I've had to work with npm, pip, maven etc. behind a corporate firewall under Windows - it's not fun. I'll try and keep this platform agnostic/aware where possible.

HTTP_PROXY & HTTPS_PROXY are environment variables used by lots of software to know where your proxy is. Under Windows, lots of software also uses your OS specified proxy which is a totally different thing. That means you can have Chrome (which uses the proxy specified in your Internet Options) connecting to the URL just fine, but npm, pip, maven etc. not working because they use HTTPS_PROXY (except when they use HTTP_PROXY - see later). Normally the environment variable would look something like:

But you're getting a 403 which suggests you're not being authenticated against your proxy. If it is basic authentication on the proxy, you'll want to set the environment variable to something of the form:

There is an HTTP status code 407 (proxy authentication required), which is the more correct way of saying it's the proxy rather than the destination server that's rejecting your request. That code plagued me for the longest time until after a lot of time on Google, I learned my proxy used NTLM authentication. HTTP basic authentication wasn't enough to satisfy whatever proxy my corporate overlords had installed. I resorted to using Cntlm on my local machine (unauthenticated), then had it handle the NTLM authentication with the upstream proxy. Then I had to tell all the programs that couldn't do NTLM to use my local machine as the proxy - which is generally as simple as setting HTTP_PROXY and HTTPS_PROXY. Otherwise, for npm use (as @Agus suggests):

"We need to decrypt all HTTPS traffic because viruses"

After this set-up had been humming along (clunkily) for about a year, the corporate overlords decided to change the proxy. Not only that, but it would no longer use NTLM! A brave new world to be sure. But because those writers of malicious software were now delivering malware via HTTPS, the only way they could protect we poor innocent users was to man-in-the-middle every connection to scan for threats before they even reached us. As you can imagine, I was overcome with the feeling of safety.

To cut a long story short, the self-signed certificate needs to be installed into npm to avoid SELF_SIGNED_CERT_IN_CHAIN:

Alternatively, the NODE_EXTRA_CA_CERTS environment variable can be set to the certificate file.

I think that's everything I know about getting npm to work behind a proxy/firewall. May someone find it useful.

Edit: It's a really common suggestion to turn off HTTPS for this problem either by using an HTTP registry or setting NODE_TLS_REJECT_UNAUTHORIZED. These are not good ideas because you're opening yourself up to further man-in-the-middle or redirection attacks. A quick spoof of your DNS records on the machine doing the package installation and you'll find yourself trusting packages from anywhere. It may seem like a lot of work to make HTTPS work, but it is highly recommended. When you're the one responsible for allowing untrusted code into the company, you'll understand why.

This problem was fixed for me by using http version of repository:

solved the issue for me. In this case both my agent and artifact depository are behind a private subnet on aws cloud

I am having the same issue, I overcome using

I happened to encounter this similar SSL problem a few days ago. The problem is your npm does not set root certificate for the certificate used by https://registry.npmjs.org.

Notice: Different program may use different way of managing root certificate, so do not mix browser's with others.

This means that your wget program cannot verify https://registry.npmjs.org's certificate. There are two reasons that may cause this problem:

So the solution is explicitly set root certificate for https://registry.npmjs.org. We can use openssl to make sure that the reason bellow is the problem.

Try openssl s_client -host registry.npmjs.org -port 443 on the command line and we will get this message (first several lines):

This line verify error:num=20:unable to get local issuer certificate makes sure that https://registry.npmjs.org does not pack root certificate. So we Google DigiCert High Assurance EV Root CA root Certificate.

I was having same issue. After some digging I realized that many post/pre-install scripts would try to install various dependencies and some times specific repositories are used. A better way is to disable certificate check for https module for nodejs that worked for me.

The problem lies on your proxy. Because the location provider of your install package creates its own certificate and does not buy a verified one from an accepted authority, your proxy does not allow access to the targeted host. I assume that you bypass the proxy when using the Chrome Browser. So there is no checking.

There are some solutions to this problem. But all imply that you trust the package provider.

Not the answer you're looking for? Browse other questions tagged npm or ask your own question.

283
Ignore invalid self-signed ssl certificate in node.js with https.request?
57
npm behind a proxy fails with status 403
36
NPM self_signed_cert_in_chain
10
npm install does not work when running npm install cordova
5
Getting UNABLE_TO_VERIFY_LEAF_SIGNATURE from NPM when installing hexo-cli
0
How to fixed npm install and other npm command
1
Error with ionic start command
2
How to fix instillation issues with npm modules on Windows 10, including node-pre-gyp? 2019

1599
How can I update NodeJS and NPM to the next versions?
982
How to uninstall npm modules in node js?
1238
npm throws error without sudo
811
How to install an npm package from GitHub directly?
601
How can I update npm on Windows?
3
Is it possible to run npm package installation locally from a downloaded bundle?
1
Install npm does not work on windows
47
Error 'tunneling socket' while executing npm install
0
Error while running npm install -g composer-cli on Window 10
0
whenever I try to install npm it throws the following error,