What are some impressive algorithms or software in the world of AI?

I have always loved the idea of AI and evolutionary algorithms. Unfortunately, as we all know, the field hasn't developed nearly as fast as expected in the early days.

What I am looking for are some examples that have the "wow" factor:

Let's not get into the semantics of what defines AI. If it looks or sounds like AI, let's hear about it.

Dr. Adrian Thompson is trying to use genetic algorithms to create a voice recognition circuit in a FPGA. After a few thousand generations, he succeeds in having the device distinguish between "stop" and "go" voice commands. He examines the structure of the device and finds that some active logic gates are disconnected from the rest of the circuit. When he disables these supposedly useless gates, the circuit stops working...

Can we try and keep the discussion to techniques/algorithms that produced something impressive? I can google if I want to read about the thousands of AI technologies that are in the early stages but showing promise.

I built an evolutionary algorithm for retail inventory replenishment in a product targeted at huge plant nurseries (and there are some really big, smart ones -- $200m companies).

It was probably the coolest thing I've ever worked on. Using three years of historical data, it crunched and evolved for a week straight while I was on vacation.

The end results were both positive and bizarre. Actually, I was pretty sure it was broken at first.

The algorithm was ignoring sales from the previous few weeks, giving them a weight of 0 for all indicators (which is at odds with how these guys currently work -- right now they consider the same week in the previous year and also factor in recent trends).

Eventually I realized what was going on. With the indicators the organism had to work with, over time it was more efficient to look at the same part of the previous month and ignore recent trends.

So instead of looking at the last several days, it looked at the same week in the previous month because there were some subtle but steady trends that repeat every 30 days. And they were more reliable than the more volatile day-to-day trends.

And the result was a significant and reproducable improvement in efficiency.

Unfortunately, I was so excited by this that I told the customer about it and they cancelled the project. That first run was extremely promising, but it was hard to sell as proof even though you could crunch almost any data from the last three years and see that the algorithm magically improved efficiency. EA's are not hard, but people find them convoluted at first, and the idea of doing something so arcane was just a little bit too much to swallow.

The big takeaway for me was that if I ever create something that appears a bit too magical, I should hold off on talking about it until I can put together a good presentation. :)

Some times ago, I've found this series of articles: Designing Emergent AI.

The author of these articles has created the game "AI War: Fleet command" that features an emergent AI. Maybe you'll find this interesting.

Slightly outside of the traditional AI realm, are HTMs (Hierachical Temporal Memory) as developed at Numenta. This technology is still in its early stages but shows promises in the targeted "WOW factor" areas.

So far the most impressive aspect of AI has been the ratio of promises to deliveries. In my opinion, the only truly viable approach to computer-based intelligence is simulated neural networks, because all of the things in the real world that we consider to be "intelligent" (humans, chimpanzees, dogs, cockroaches etc.) all possess variants of the same basic control system: a big mess of neurons hooked up to input and output devices.

Amazingly, despite this apparent truth, the Computer Science field that calls itself "neural networks" has pretty much abandoned the attempt to simulate actual biological neurons and neuronal structures. I couldn't begin to tell you why this is the case, although I suspect it's because programmers in general do not like going outside their comfort zones and learning about topics outside of Computer Science.

The only upside to this is that Terminator is still just a movie.

One of the most interesting things in AI, for me, is a very old discussion started by Rodney Brooks about his behavioral architecture called subsumption architecture.

He completely abandons all kinds of symbolic representation, and always says: take the world as your model. This saves the robot from generating a wrong world view and all complicated issues in correcting the model.

He published many interesting books and was one of the first persons in the embodied cognition approach that is used a lot in research at the moment.

Interesting reading material can be found on http://people.csail.mit.edu/brooks/index.html. Some of his later publications get very philosophical, but the earlier descriptions of the robots and how their behavior emerged from a simple set of rules and actions are worth reading.

I found the recent research of evolution and cooperation among robots very intriguing. This blog entry gives a good summary of the experiment and its results. Most interesting to me was the observed behavior of both martyr AI and "evil" AI.

I don't think there is a definite, objective answer to your question, so here is my personal favorite.

"learnfun & playfun: A general technique for automating NES games" (with source code and other info)

Here is a youtube link if the other previous one would die. This was also featured on Vsauce.

"Rather than loose, and receive a 'game over', it just paused the game. For ever. [...] The only winning move is to not play." 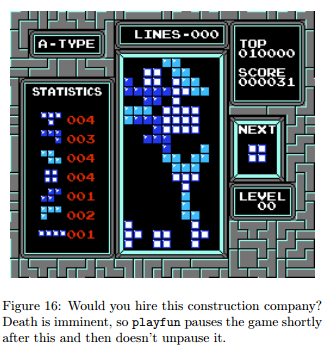 You might be asking an incomplete question. You are saying "what are great answers", but just like the Hitchhikers guide to the galaxy, when the best computer gives "42" as an answer, you want to know what is the question.

There are some "best questions" that drive some great answers. Some really useful answers are in things that look mundane. The "traveling salesman problem" means a lot of cost or money for FedEx. Dijkstra's algorithm drives the paths packets on the internet actually follow.

These may seem mundane, but they are neat to me.

I also like the evolutionary antenna. I'm pretty sure that when Musk says that AI presents an existential threat, he is referring to the power of evolutionary algorithms. There is a much more modern version of that on one of the Mars rovers - and humans couldn't invent it (alone), but they can set up computers that can.

There is an ambitious open source Java library called CIlib that provides a host of Computational Intelligence methods. It is currently being used at University level by a research group to advance their own research.

Not the answer you're looking for? Browse other questions tagged artificial-intelligence genetic-algorithm or ask your own question.

-3
how to rate popularity of person across the world?