.disableSelection in JQueryUI 1.9 is deprecated. The only explanation I can find is, literally, "Disabling text selection is bad. Don't use this." and "We shouldn't allow developers to mess with text selection. This was originally for the interaction plugins, but they're all handling text selection properly on their own at this point."

Since there is no alternative suggested, I assume they mean that it is always bad but I cannot fathom their reasons. A double/triple-click or otherwise meaningless selection of an elaborate-UI application improperly applies the text-highlight effect and (to me) instantly removes the illusion of a robust user experience.

Desktop applications don't suffer from this! Buttons and other controls in a Desktop environment are regions of pixels that look solid and act intuitively no matter what you do to them (or else they're broken). The fact that web applications are composed of complex html boxes, backgrounds, borders, and images (the web-analog of pixels) is no reason to betray the illusion that the screen elements we interact with isn't an atomic, physical object.

In the image below, arguably some of the text should be selectable, such as the paragraphs of text within panels which could be application data. But for some applications it would be a reasonable design choice that other parts, such as the text in buttons, tabs, accordion headers, and text behind modal dialogs would not be selectable. This especially applies to draggable/sortable kinds of behaviors. 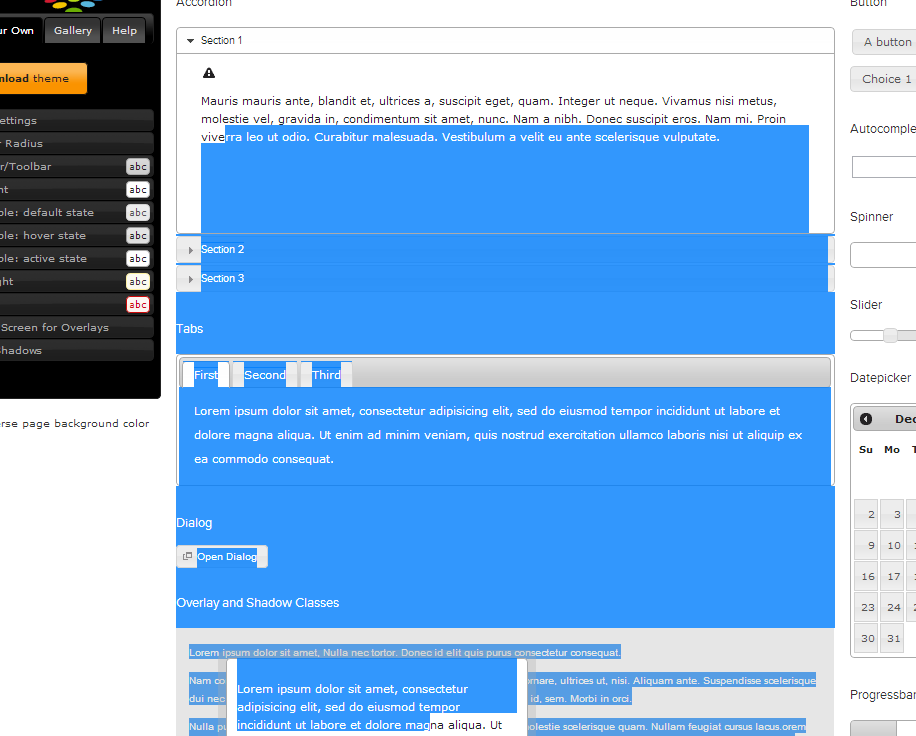 1) Am I misinterpreting their decision? Is the recommendation more specific to JQuery than I realize?

2) If it is meant as a general statement that text should always be selectable like this, please provide a fuller explanation of why.

3) If I were going to do it anyway, what is the most performant, complete, respectful, cross-browser, and universally accessible to go about it now that disableSelection is deprecated?

You can use CSS to accomplish this in most browsers: http://jsfiddle.net/fQthQ/

Opera does not currently support this feature.

A real-world case in which disabling text selection is useful is a <ul> element whose <li> have been programmed to be draggable (for sorting). The dragging works correctly except that text is getting selected while the user is dragging. Surely this is a legitimate use for disableSelection().

I know that it can be done without this method (otherwise it'd be impossible for the method to do it in the first place); but the reason I wanted to use disableSelection() is to concisely express my desire in a single place and have jQuery-UI handle my cross-browser compatibility issues rather than having to use a combination of several CSS rules and some JS (for IE7).

I believe this feature is deprecated because someone was annoyed at web sites that disable selection, and decided that this is not a practice they should encourage. It's analogous to a web programmer refusing to support popular legacy browsers because they don't want to encourage their use. Such a programmer would be fired, but you can get away with imposing your philosophy on others when you have power over a popular library. Deprecating this feature has the effect of making programmers who want to disable selection waste their time looking for an alternative method. By punishing evildoers, jQuery-UI will presumably make them change their ways, and our society will not be inundated with web sites that disable selection. So you see, there is a perfectly good rationalization, and whoever wrote "Disabling text selection is bad. Don't use this." in the official documentation can regard themselves as heroic. We're the bad guys here.

As an alternative to the CSS user-select: none; technique, I think simply preventing default behavior on double-click and mousedown via $(document).on('dblclick mousedown', '.prevent-select', false); has some advantages:

I could not agree more with @WesleyMurch, wish I could give you more +1s :) I also feel that, JS should not be the way forward, css may be better for this...,

If you need the selection to toggle (in some cases if dynamic) you can use jquery to toggle between classes, (old IE browsers) you may ask???

Well it's a good way (subtle tool) to discourage people to keep using OLD I.E. because of the things they are missing out.

I would use the CSS option as @Shmiddty explains but maybe, enabled to start with and disable as you go along, but that's just my opinion :)

Not the answer you're looking for? Browse other questions tagged jquery-ui textselection or ask your own question.

8
jqueryUI Sortable: handling .disableSelection() on form inputs
3
jQuery sortable / disableselection problem
6
Why doesn't this MotionEvent simulation work?
86
What is disableSelection used for in jQuery UI?
4
disableSelection on everything but input[type=text]
0
Anybody know how to select text in webview in android? not use emulateShiftHeld,since the docs said “ This method is deprecated”
98
Javascript Array Concat not working. Why?
0
Does ui.overState is deprecated?
0
JQuery Ui tabs pagination deprecated