to clarify, my question refers to wrapping/intercepting calls from one function/symbol to another function/symbol when the caller and the callee are defined in the same compilation unit with the GCC compiler and linker.

I have a situation resembling the following: 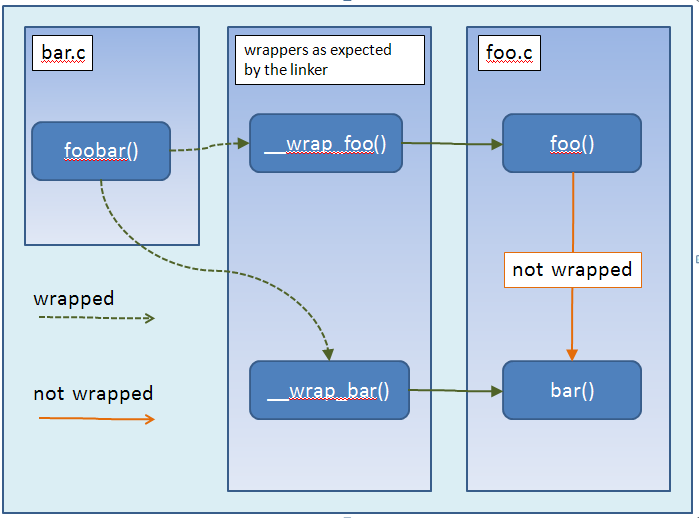 I tried using objcopy --redefine-sym, but that only renames the symbols and their references.

That way, the wrapping/interception takes place for all calls to foo and bar, and not just the ones taking place outside of foo.o.

You have to weaken and globalize the symbol using objcopy.

Weaken the foo symbol and make it global, so it's available for linker again.

Now you can link your new obj with the wrap from bar.c

And the wrapped one:

You can use __attribute__((weak)) before the implementation of the callee in order to let someone reimplement it without GCC yelling about multiple definitons.

For example suppose you want to mock the world function in the following hello.c code unit. You can prepend the attribute in order to be able to override it.

And you can then override it in another unit file. Very useful for unit testing/mocking:

And then just compile this code and debug. When you call the reall malloc, the function called will __wrap_malloc and __real_malloc will call malloc.

I think this is the way to intercept the calls.

Basically its the --wrap option provided by ld.

This appears to be working as documented:

Note the undefined above. When the linker processes foo.o, the bar() is not undefined, so the linker does not wrap it. I am not sure why it's done that way, but there probably is a use case that requires this.

I have tried the solution from @PeterHuewe and it works but it doesn't allow to call the original function from the wrapper. To allow this my solution is the following:

I was able to solve the problem using the defsym option:

I did not also try to define __real_* symbols.

Not the answer you're looking for? Browse other questions tagged gcc linker mocking ld interceptor or ask your own question.

1
GCC's linker --wrap will not wrap over static library function
74
Override a function call in C
2
Stop library from calling getenv?
5
Is it possible to use operator new to allocate from elsewhere than the heap?
4
How to replace symbols in object files
1
How is it possible to overload the throw function while writing a custom exception class in C++?
1
Mock/Wrap static functions called by a non-static function under test
2
Rename a function without changing its references
1
Wrapping symbols during linking on OS X
2
overridding glibc function in shared library to downgrade glibc required version in cross compilation
See more linked questions

4
preventing "ld -wrap " circular references
9
Linux, GNU GCC, ld, version scripts and the ELF binary format -- How does it work?
49
Linking against older symbol version in a .so file
9
Is it possible to override static functions in an object module (gcc, ld, x86, objcopy)?
0
Undefined reference to wrapped function with -Wl,--wrap
1
Wrapping symbols during linking on OS X
0
Automatic selection of .o file in static library (.a file)
2
Rename a function without changing its references
0
linking with wrap directive for unit testing can be used to redefine a subroutine?