I am currently reading the Machine Learning book by Tom Mitchell. When talking about neural networks, Mitchell states:

I am having problems understanding what he means with "linearly separable"? Wikipedia tells me that "two sets of points in a two-dimensional space are linearly separable if they can be completely separated by a single line."

But how does this apply to the training set for neural networks? How can inputs (or action units) be linearly separable or not?

I'm not the best at geometry and maths - could anybody explain it to me as though I were 5? ;) Thanks!

Suppose you want to write an algorithm that decides, based on two parameters, size and price, if an house will sell in the same year it was put on sale or not. So you have 2 inputs, size and price, and one output, will sell or will not sell. Now, when you receive your training sets, it could happen that the output is not accumulated to make our prediction easy (Can you tell me, based on the first graph if X will be an N or S? How about the second graph):

As you can see in the first graph, you can't really separate the two possible outputs (sold/not sold) by a straight line, no matter how you try there will always be both S and N on the both sides of the line, which means that your algorithm will have a lot of possible lines but no ultimate, correct line to split the 2 outputs (and of course to predict new ones, which is the goal from the very beginning). That's why linearly separable (the second graph) data sets are much easier to predict.

This means that there is a hyperplane (which splits your input space into two half-spaces) such that all points of the first class are in one half-space and those of the second class are in the other half-space.

In two dimensions, that means that there is a line which separates points of one class from points of the other class. 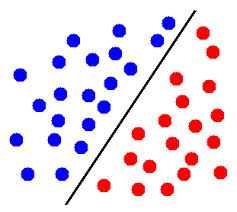 In three dimensions, it means that there is a plane which separates points of one class from points of the other class.

In higher dimensions, it's similar: there must exist a hyperplane which separates the two sets of points.

You mention that you're not good at math, so I'm not writing the formal definition, but let me know (in the comments) if that would help.

The left data set is not linearly separable (without using a kernel). The right one is separable into two parts for A' andB` by the indicated line.

I.e. You cannot draw a straight line into the left image, so that all the X are on one side, and all the O are on the other. That is why it is called "not linearly separable" == there exist no linear manifold separating the two classes.

Now the famous kernel trick (which will certainly be discussed in the book next) actually allows many linear methods to be used for non-linear problems by virtually adding additional dimensions to make a non-linear problem linearly separable.

Not the answer you're looking for? Browse other questions tagged machine-learning neural-network or ask your own question.

3
Neural Networks: Why does the perceptron rule only work for linearly separable data?
1
Artificial Neural Network for formula classification/calculation

7
Choosing the correct type of neural network
3
Neural Networks: Why does the perceptron rule only work for linearly separable data?
0
Applying Neural Network to forecast prices
5
Q-learning using neural networks
0
perceptron: can they only classify data in a two-dimensional space?