I know that I can use preprocessor directives to check for Debug/Release by doing this:

but what about checking for other configurations, like Test. In VB you can do this:

So, my question is in C#, how can I check for Test mode? I have some code that I want to execute if I'm in Debug AND Test, but not in Release mode, so specifically, I need a way to check for not being in Release mode. In VB I would do this:

It's the same as for DEBUG, assuming that you've defined a build configuration that lists TEST in the "Conditional compilation symbols" text box (under project properties > Build tab; this is a space-delimited list).

For code that you only want to run in the TEST build configuration:

And for code you don't want to run in the TEST build configuration, you can either #else the above, or do this:

Right click on the Project [Project name] name you want to use the custom precompiler directive.

Go to the properties item and then to the build tab. 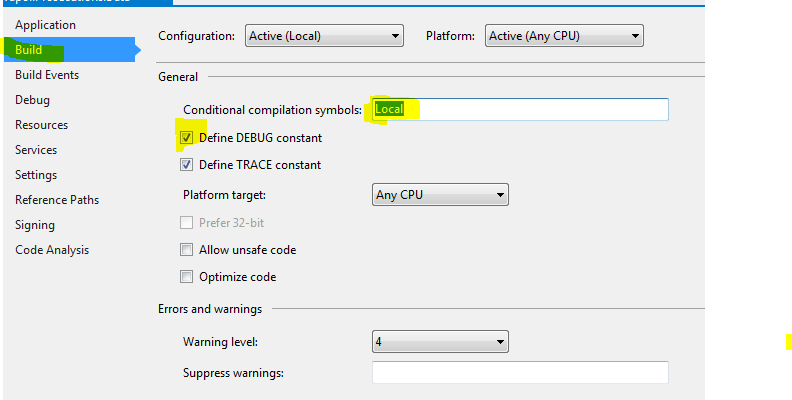 There are a couple ways to handle your factorings. In my world, we used four primary techniques:

So for example, we have build configurations for, C# with unmanaged code, C# with all managed code, C# for silverlight. In the C# unmanaged project we have a compile-time symbol UNMANAGED, for C# we have MANAGED and for the silverlight we have SILVERLIGHT. This lets me inject small tasks into the code and share the same files across all projects. No big deal.

For separate implementations, we acknowledge that there is little that can be shared between the code bases and we're better off with separate code. This is not ideal, but so be it.

For runtime checks, it's exactly that. Rather than check for DEBUG in a #if, you use a runtime check for a setting to make that choice. Unless you've got heinously huge debug scaffolding, this is not a bad choice as it also lets you do field debugging (but you may have delivery constraints that prevent it).

Personally, I try to avoid the compiler flags. They make the code harder to read. Honestly, though, there are times where they make sense. We've had classes that wouldn't compile in silverlight just because of the class declaration (I think it was ObservableCollection that wasn't available) and we had to inherit from something else. Everything else worked fine.

Now you can play with DEBUG predecessor directive like

Not the answer you're looking for? Browse other questions tagged c# .net preprocessor-directive or ask your own question.