I noticed that the fully qualified name of an object I had written was coming back funny. While stepping through my ToString() method, I noticed that when it came to concatenating the string, a character object was consistently being left out of that process.

Here's a step through of what's happening

Here's the code of my tostring function:

Already, looking in the locals panel, it seems like VS is getting a string other than what I think it would.

I put in another ToString function to handle a call without parameters (which it does by calling the parametrized function with Representation.Colons):

Now that you've posted more of your program the problem is obvious. Char plus int is not string. Remember,

And when you add an int to a char, you get an int: 'a' + 2 produces the integer character code corresponding to 'c', not the string "a2".

You're getting some crazy integer by adding the user id to the colon char.

Concatenating strings like this is a bad practice for exactly the reason you have run into. Instead, say:

Or, even better, use a StringBuilder object to build a complicated string.

Incidentally, this illustrates an interesting point about the language:

which as we've seen, might have a different type analysis! Had you said:

then that would have been analyzed as

Which does make everything a string.

I copy pasted your code and it works fine 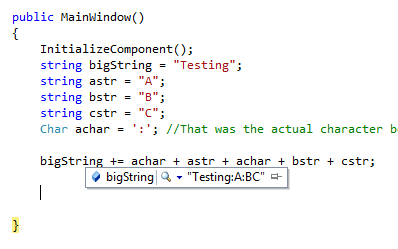 Not the answer you're looking for? Browse other questions tagged c# concatenation or ask your own question.

6887
What is the difference between String and string in C#?
525
String concatenation: concat() vs “+” operator
1457
How do you convert a byte array to a hexadecimal string, and vice versa?
3094
Case insensitive 'Contains(string)'
935
How would you count occurrences of a string (actually a char) within a string?
1176
Multiline string literal in C#
991
StringBuilder vs String concatenation in toString() in Java
1052
How do I turn a C# object into a JSON string in .NET?