Difference between PSObject, Hashtable, and PSCustomObject

Can anybody explain the details? If I create an object using

and then I look for its type using getType() PowerShell tells me it's of type Hashtable.

When using Get-Member (alias gm) to inspect the object it's obvious that a hashtable has been created, since it has a keys and a values property. So what's the difference to a "normal" hashtable?

Also, what's the advantage of using a PSCustomObject? When creating one using something like this

the only visible difference to me is the different datatype of PSCustomObject. Also instead of keys and value properties, a inspection with gm shows that now every key has been added as a NoteProperty object.

But what advantages do I have? I'm able to access my values by using its keys, just like in the hashtable. I can store more than simple key-value pairs (key-object pairs for example) in the PSCustomObject, JUST as in the hashtable. So what's the advantage? Are there any important differences?

One scenario where [PSCustomObject] is used instead of HashTable is when you need a collection of them. The following is to illustrate the difference in how they are handled:

Format-Table will result in the following for $Hash:

And the following for $CustomObject:

The same thing happens with Export-Csv, thus the reason to use [PSCustomObject] instead of just plain HashTable.

Say I want to create a folder. If I use a PSObject you can tell it is wrong by looking at it

However the PSCustomObject looks correct

I can then pipe the object

From the PSObject documentation:

Wraps an object providing alternate views of the available members and ways to extend them. Members can be methods, properties, parameterized properties, etc.

In other words, a PSObject is an object that you can add methods and properties to after you've created it.

From the "About Hash Tables" documentation:

A hash table, also known as a dictionary or associative array, is a compact data structure that stores one or more key/value pairs.

Hash tables are frequently used because they are very efficient for finding and retrieving data.

You can use a PSObject like a Hashtable because PowerShell allows you to add properties to PSObjects, but you shouldn't do this because you'll lose access to Hashtable specific functionality, such as the Keys and Values properties. Also, there may be performance costs and additional memory usage.

The PowerShell documentation has the following information about PSCustomObject:

Serves as a placeholder BaseObject when PSObject's constructor with no parameters is used.

This was unclear to me, but a post on a PowerShell forum from the co-author of a number of PowerShell books seems more clear:

[PSCustomObject] is a type accelerator. It constructs a PSObject, but does so in a way that results in hash table keys becoming properties. PSCustomObject isn't an object type per se – it's a process shortcut. ... PSCustomObject is a placeholder that's used when PSObject is called with no constructor parameters.

If you want to convert a Hashtable into an object in order to use its keys as property names you can use one of the following lines of code:

If you want to convert a number of Hashtables into an object where their keys are property names you can use the following code:

Finding documentation regarding NoteProperty was difficult. In the Add-Member documentation, there isn't any -MemberType that makes sense for adding object properties other than NoteProperty. The Windows PowerShell Cookbook (3rd Edition) defined the Noteproperty Membertype as:

A property defined by the initial value you provide

One advantage I think for PSObject is that you can create custom methods with it.

I think the biggest difference you'll see is the performance. Have a look at this blog post:

The author ran the following code:

You can see the difference in speed when you put it all together. The object method takes 167 seconds on my computer while the hash table method will take under a second to build the hash table and then do the lookup.

Here are some of the other, more-subtle benefits: Custom objects default display in PowerShell 3.0

We have a bunch of templates in our Windows-PKI and we needed a script, that has to work with all active templates. We do not need to dynamically add templates or remove them. What for me works perfect (since it is also so "natural" to read) is the following:

The only difference between Type-1 & Type-2

Difference between HashTable and PSCustomObject/PSObject is 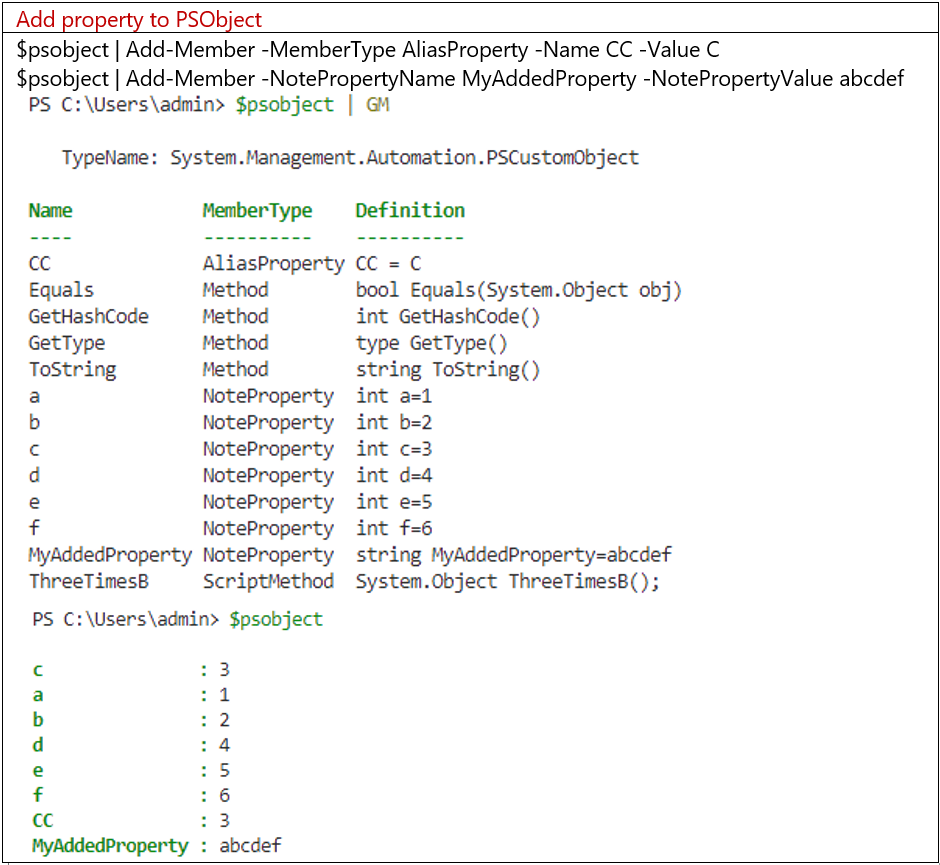 5
Write-SqlTableData: The given value of type String from the data source cannot be converted to type bit of the specified target column
5
PSObject sorting
4
Using the exit statement breaks the output in some cases. Is there a reason for this or is it a bug?
2
Sort a nested hash table by value
1
Iterate through multiple arrays in powershell script
0
Is there a way to get-content from a specific NoteProperty in Powershell?
0
Why is PowerShell creating a Char Array instead of a String Array?
0
Change column title between columns in table of hash values

2
How can you use GetType().GetProperties() on a PowerShell Custom PSObject?
21
Hashtables from ConvertFrom-json have different type from powershells built-in hashtables, how do I make them the same?
15
PowerShell type accelerators: PSObject vs PSCustomObject
0
Convert saved PSCustomObject (as string) back to hashtable
35
How can I enumerate a hashtable as key-value pairs / filter a hashtable by a collection of key values
3
Powershell sort PSObject alphabetically
1
foreach through hashtable values
0
Sort hashtable and put into a new hashtable
1
Powershell adding dynamic hashtables to pscustomobject
2
Powershell Pipeline - return a new Object, that was created within pipline