Why is extending native objects a bad practice?

Every JS opinion leader says that extending the native objects is a bad practice. But why? Do we get a perfomance hit? Do they fear that somebody does it "the wrong way", and adds enumerable types to Object, practically destroying all loops on any object?

Take TJ Holowaychuk's should.js for example. He adds a simple getter to Object and everything works fine (source).

This really makes sense. For instance one could extend Array.

Are there any arguments against extending native types?

When you extend an object, you change its behaviour.

When method are added to the object and array classes in javascript, the risk of breaking something is very high - due to how javascript works. Long years of experience have taught me that this kind of stuff causes all kinds of terrible bugs in javascript.

If you need custom behaviour, it is far better to define your own class (perhaps a subclass) instead of changing a native one. That way you will not break anything at all.

The ability to change how a class works without subclassing is an important feature of any good programming language, but it is one that must be used rarely and with caution.

There's no measurable drawback, like a performance hit. At least nobody mentioned any. So this is a question of personal preference and experiences.

The main pro argument: It looks better and is more intuitive: syntax sugar. It is a type/instance specific function, so it should be specifically bound to that type/instance.

The main contra argument: Code can interfere. If lib A adds a function, it could overwrite lib B's function. This can break code very easily.

Both have a point. When you rely on two libraries that directly change your types, you will most likely end up with broken code as the expected functionality is probably not the same. I totally agree on that. Macro-libraries must not manipulate the native types. Otherwise you as a developer won't ever know what is really going on behind the scenes.

And that is the reason I dislike libs like jQuery, underscore, etc. Don't get me wrong; they are absolutely well-programmed and they work like a charm, but they are big. You use only 10% of them, and understand about 1%.

That's why I prefer an atomistic approach, where you only require what you really need. This way, you always know what happens. The micro-libraries only do what you want them to do, so they won't interfere. In the context of having the end user knowing which features are added, extending native types can be considered safe.

TL;DR When in doubt, don't extend native types. Only extend a native type if you're 100% sure, that the end user will know about and want that behavior. In no case manipulate a native type's existing functions, as it would break the existing interface.

If you decide to extend the type, use Object.defineProperty(obj, prop, desc); if you can't, use the type's prototype.

I originally came up with this question because I wanted Errors to be sendable via JSON. So, I needed a way to stringify them. error.stringify() felt way better than errorlib.stringify(error); as the second construct suggests, I'm operating on errorlib and not on error itself.

In my opinion, it's a bad practice. The major reason is integration. Quoting should.js docs:

OMG IT EXTENDS OBJECT???!?!@ Yes, yes it does, with a single getter should, and no it won't break your code

If you're doing it in your own project then it's fine. But for a library, then it's a bad design. Underscore.js is an example of the thing done the right way:

If you look at it on a case by case basis, perhaps some implementations are acceptable.

Overwriting already created methods creates more issues than it solves, which is why it is commonly stated, in many programming languages, to avoid this practice. How are Devs to know the function has been changed?

In this case we are not overwriting any known core JS method, but we are extending String. One argument in this post mentioned how is the new dev to know whether this method is part of the core JS, or where to find the docs? What would happen if the core JS String object were to get a method named capitalize?

What if instead of adding names that may collide with other libraries, you used a company/app specific modifier that all the devs could understand?

If you continued to extend other objects, all devs would encounter them in the wild with (in this case) we, which would notify them that it was a company/app specific extension.

This does not eliminate name collisions, but does reduce the possibility. If you determine that extending core JS objects is for you and/or your team, perhaps this is for you.

Extending prototypes of built-ins is indeed a bad idea. However, ES2015 introduced a new technique that can be utilized to obtain the desired behavior:

The following implementation extends the Number and Array prototypes without touching them at all:

As you can see even primitive prototypes can be extended by this technique. It uses a map structure and Object identity to associate types with built-in prototypes.

My example enables a reduce function that only expects an Array as its single argument, because it can extract the information how to create an empty accumulator and how to concatenate elements with this accumulator from the elements of the Array itself.

Please note that I could have used the normal Map type, since weak references doesn't makes sense when they merely represent built-in prototypes, which are never garbage collected. However, a WeakMap isn't iterable and can't be inspected unless you have the right key. This is a desired feature, since I want to avoid any form of type reflection.

One more reason why you should not extend native Objects:

We use Magento which uses prototype.js and extends a lot of stuff on native Objects. This works fine until you decide to get new features in and that's where big troubles start.

We have introduced Webcomponents on one of our pages, so the webcomponents-lite.js decides to replace the whole (native) Event Object in IE (why?). This of course breaks prototype.js which in turn breaks Magento. (until you find the problem, you may invest a lot of hours tracing it back)

I can see three reasons not to do this (from within an application, at least), only two of which are addressed in existing answers here:

Point 3 is arguably the most important one. You can make sure, through testing, that your prototype extensions don't cause any conflicts with the libraries you use, because you decide what libraries you use. The same is not true of native objects, assuming that your code runs in a browser. If you define Array.prototype.swizzle(foo, bar) today, and tomorrow Google adds Array.prototype.swizzle(bar, foo) to Chrome, you're liable to end up with some confused colleagues who wonder why .swizzle's behaviour doesn't seem to match what's documented on MDN.

(See also the story of how mootools' fiddling with prototypes they didn't own forced an ES6 method to be renamed to avoid breaking the web.)

Perf is also a reason. Sometimes you might need to loop over keys. There are several ways to do this

I usually use for of Object.keys() as it does the right thing and is relatively terse, no need to add the check.

But, it's much slower. 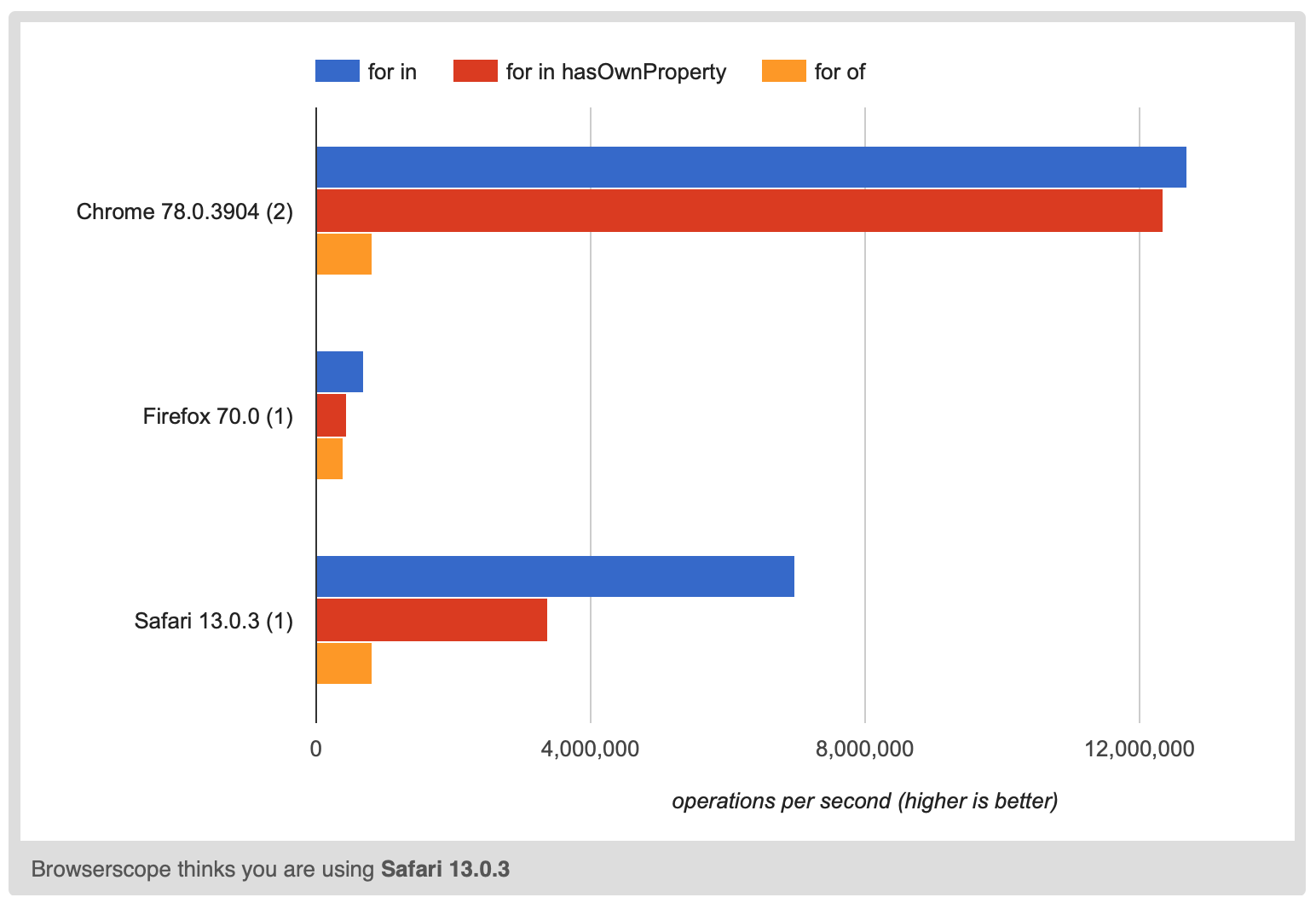 Just guessing the reason Object.keys is slow is obvious, Object.keys() has to make an allocation. In fact AFAIK it has to allocate a copy of all the keys since.

It's possible the JS engine could use some kind of immutable key structure so that Object.keys(object) returns a reference something that iterates over immutable keys and that object.newProp creates an entirely new immutable keys object but whatever, it's clearly slower by up to 15x

Even checking hasOwnProperty is up to 2x slower.

The point of all of that is that if you have perf sensitive code and need to loop over keys then you want to be able to use for in without having to call hasOwnProperty. You can only do this if you haven't modified Object.prototype

note that if you use Object.defineProperty to modify the prototype if the things you add are not enumerable then they won't affect the behavior of JavaScript in the above cases. Unfortunately, at least in Chrome 83, they do affect performance.

I added 3000 non-enumerable properties just to try to force the any perf issues to appear. With only 30 properties the tests were too close to tell if there was any perf impact.

Firefox 77 and Safari 13.1 showed no difference in perf between the Augmented and Unaugmented classes maybe v8 will get fixed in this area and you can ignore the perf issues.

But, Let me also add there is the story of Array.prototype.smoosh. The short version is Mootools, a popular library, made their own Array.prototype.flatten. When the standards committee tried to add a native Array.prototype.flatten they found the couldn't without breaking lots of sites. The devs who found out about the break suggested naming the es5 method smoosh as a joke but people freaked out not understanding it was a joke. They settled on flat instead of flatten

The moral of the story is you shouldn't extend native objects. If you do you could run into the same issue of your stuff breaking and unless your particular library happens to be as popular as MooTools the browser vendors are unlikely to work around the issue you caused. If your library does get that popular it would be kind of mean to force everyone else work around the issue you caused. So, please Don't Extend Native Objects

After a time I've changed my mind - prototype pollution is bad (however I left example at the end of the post).

It may cause a lot more trouble than mentioned in above and below posts.

It's important to have single standard across whole JS/TS universe (it would be nice to have consistent npmjs).

Previously I wrote bull**it and encouraged people to do it in their libraries - sorry for this:

I was personally extending native methods, I am just using x prefix in my libraries (using it also when extending 3rd party libraries).

4
What are pitfalls of extending Object.prototype?
-2
Why is it bad to change prototypes (js)?
0
Extending core functionality
0
Why shouldn't we extend JavaScript prototypes?
0
Javascript alternatives to extending native objects
0
Javascript Object Prototype with function vs object
1
What are the arguments for and against extending native prototypes?
0
Is it possible set javascript prototype?
2644
Generate random string/characters in JavaScript
3794
How do I check for an empty/undefined/null string in JavaScript?
See more linked questions

3165
How can I merge properties of two JavaScript objects dynamically?
2037
Why is using "for...in" for array iteration a bad idea?
1654
Sorting an array of objects by property values
3922
Sort array of objects by string property value
3006
How to store objects in HTML5 localStorage/sessionStorage
2404
What is JSONP, and why was it created?
4415
Why does Google prepend while(1); to their JSON responses?
1860
Why does ++[[]][+[]]+[+[]] return the string "10"?
2052
Find object by id in an array of JavaScript objects
3171
Why does my JavaScript code receive a "No 'Access-Control-Allow-Origin' header is present on the requested resource" error, while Postman does not?