I've tried to implement Google Maps v2 in my Android application, but unfortunately instead of maps I get this message:

Is it possible to run these maps on the Android emulator (Platform 4.2)?

At the moment, referencing the Google Android Map API v2 you can't run Google Maps v2 on the Android emulator; you must use a device for your tests.

For those who have updated to the latest version of google-play-services_lib and/or have this error Google Play services out of date. Requires 3136100 but found 2012110 this newer version of com.google.android.gms.apk (Google Play Services 3.1.36) and com.android.vending.apk (Google Play Store 4.1.6) should work.

Test with this configuration on Android SDK Tools 22.0.1. Another configuration that targets pure Android, not the Google one, should work too.

I found this way to be the easiest, cleanest and it works with the newest version of the software, which allow you to get all the bug fixes.

Please try the following. It was successfully for me.

I've successful installed Google Maps v2 on an emulator using this guide.
You should do the following steps:

I recommend using the emulator by Genymotion instead of Google's emulators. It launches way faster and responds almost in real-time. It also supports Google Play Services and therefore Google Maps. 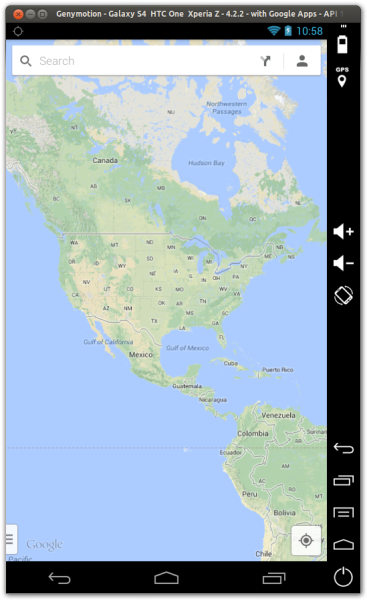 Give it a try! Here is a blog post which helps you setting up the emulator.

I am able to have my emulator to run my app with Google Map V.2 (with Google Play Service V.4). I followed steps that others suggested with some failures, however I learned from it and somehow make it work. This is how:

Google has updated the Virtual Device targeting API 23. It now comes with Google Play Services 9.0.80. So if you are using Google Maps API V 2.0 (I'm using play-services-maps:9.0.0 and play-services-location.9.0.0) no workaround necessary. It just works!

I have successfully run our app, which requires Google Maps API 2, on an AndroVM virtual machine.

AndroVM does not come with Google Maps or Google Play installed, but provides a modified copy of the Cyanogen Gapps archive, which is a set of the proprietary Google apps installed on most Android devices.

The instructions, copied from the AndroVM FAQ:

How can I install Google Apps (including the Market/Play app) ?

Your VM will reboot and you should have google apps including Market/Play.

You won’t have some Google Apps, like Maps, but they can be downloaded from the Market/Play.

Some great side effects of using a VM rather than the emulator:

The only bump in the road so far has been lack of multi-touch gestures, which is a bummer for a mapping app! I plan to work around this with a hidden UI mechanism, so not such a huge problem.

You need to try on an emulator with the Google API's version. Each platform has two versions, Android and Android+Google APIs. Ensure that when you create the AVD, you select the Google APIs version on target field.

And the page Ensure Devices Have the Google Play services APK can be also helpful.

I tried the steps above (by paniniluncher) but received the following message:

I received this message because I required different versions of the files noted above. To resolve the issue I first uninstalled the files referenced above, downloaded the versions that I needed (as referenced in the following StackOverflow posting:

and then installed these files using the `adb -e install [path-to-APK-file] and then restarted the emulator and it worked perfectly!

I have already replied to this question in an answer to Stack Overflow question Trouble using Google sign-in button in emulator. It only works for Android 4.2.2, but lets you use the "Intel Atom (x86)" in AVD.

I think that it is easy to make it work for other versions of Android. Just find the correct files.

Not the answer you're looking for? Browse other questions tagged android android-emulator avd android-maps-v2 google-play-services or ask your own question.

2713
How to save an activity state using save instance state?
4030
How do you close/hide the Android soft keyboard programmatically?
6034
What is the difference between “px”, “dip”, “dp” and “sp”?
408
How do I launch the Android emulator from the command line?
524
How to connect to my http://localhost web server from Android Emulator
3758
Proper use cases for Android UserManager.isUserAGoat()?
1152
How do I “select Android SDK” in Android Studio?
1317
Android 8: Cleartext HTTP traffic not permitted