Converting a JApplet to .exe

I have a small (Swing) JApplet that runs perfectly in Eclipse: it contains a label, two buttons and a menu, with minimum user interaction (when choosing a menu item, the color of the container changes). I converted this to a .jar:

I heard the right way to obtain an exe file is to convert a .jar into .exe so I used the "Launch4j" application with the .jar obtained previously:

I have JRE installed, so the .exe should work, but it doesn't work. What did I do wrong? I would start by investigating if the .JAR was correctly obtained, is that a good approach and how would I check that? Thank you!

PS: Upon being advised to use JFrame instead of JApplet, I did that and still nothing happens when I double click the .exe in order to open it. This makes me suspect there is something wrong in the steps I described.

Add a main method to your applet to put it inside a JFrame:

In the Eclipse JAR exportation dialog, after the "JAR Packaging Options" screen (the one with "Export class files with error and/or warnings" that you mention above), click next (and not finish). Choose "Generate manifest file" and enter the fully qualified (i.e. including package) class name of your main class: 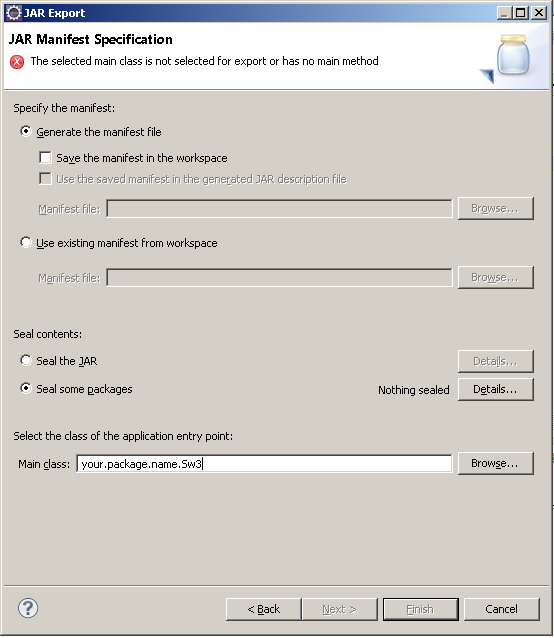 4002
How do I read / convert an InputStream into a String in Java?
1477
How can I convert a stack trace to a string?
1002
Converting array to list in Java
2986
How do I convert a String to an int in Java?
125
What causes “Unable to access jarfile” error?
0
Runnable JAR exe wrapper and JRE installer if not exist
0
NoClassDefFoundError when running exported JAR from Eclipse
13
How to deploy created .jar file in Apache Tomcat server in Eclipse IDE?