Suppose I want to price a call option using a finite difference method and repa then the following does the job:

But now suppose I want to price options in parallel (say to do a spot ladder) then I can do this:

I tried this for 3 but sadly encountered a bug in ghc:

Your bug is unrelated to your code -- it is your use of -fext-core to print the output of compilation in the External Core format. Just don't do that (to see the core, I use ghc-core).

Compile with -O2 and -threaded:

So it completes too quickly to see a result. I'll increase your m and p parameters to 1k and 3k

So yes, it does run in parallel. 1.6x on a 2 core machine, at a first attempt. Whether or not it is efficient is another question. Use +RTS -s you can see the runtime stats:

So we had 3 threads running in parallel (2 presumably for the algo, one for the IO manager).

You can reduce running time by adjusting the GC settings. E.g. by using -A we can reduce GC overhead, and yield genuine parallel speedups.

You can improve numeric performance sometimes by using the LLVM backend. This seems to be the case here as well:

Nothing spectacular, but you are improving running time over your single threaded version, and I've not modified your original code in any way. To really improve things, you'll need to profile and optimize.

Revisiting the -A flags, we can bring the time down yet further using a tigher bound on the initial thread allocation area.

So have brought it down to 1.8s from 2.7 (30% improvement) by using the parallel runtime, the LLVM backend, and being careful with GC flags. You can look at the GC flag surface to find the optimum: 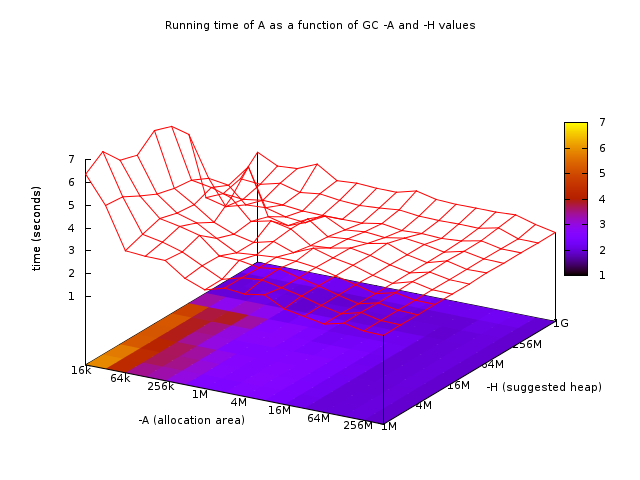 With the trough around -A64 -N2 being ideal for the data set size.

As Alp suggests, to see the runtime behavior of the program, compile threadscope (from Hackage) and run as follows:

And you get an event trace for your two cores like so:

So what's going on here? You have an initial period (0.8s) of setup time -- allocating your big list and encoding it into a repa array -- as you can see by the single threaded interleaving of GC and execution. Then there's another 0.8s of something on a single core, before your actual parallel work occurs for the last 300ms.

So while your actual algorithm may be parallelizing nicely, all the surrounding test setup basically swamps the result. If we serialize your dataset, and then just load it back from disk, we can get better behavior:

and now your profile looks healthier:

So, finally, we can see you get good parallelism:

In general, repa code should consist of parallel traverals, consumers and produces, and inlinable kernel functions. So as long as you are doing that, then the code is probably idiomatic. If in doubt, look at the tutorial. I'd in general mark your worker kernels (like f) as inlined.

The code will execute in parallel if you use parallel combinators like computeP or the various maps and folds. So yes, it should and does run in parallel.

Generally, you will know a priori because you use parallel operations. If in doubt, run the code and observe the speedup. You may then need to optimize the code.

Not the answer you're looking for? Browse other questions tagged arrays performance haskell repa or ask your own question.