I am trying to a make custom InfoWindow after a click on a marker with the new Google Maps API v2. I want it to look like in the original maps application by Google. Like this: 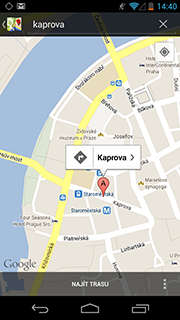 When I have ImageButton inside, its not working - the entire InfoWindow is slected and not just the ImageButton. I read that it is because there isn't a View itself but it's snapshot, so individual items cannot be distinguished from each other.

EDIT: In the documentation (thanks to Disco S2):

As mentioned in the previous section on info windows, an info window is not a live View, rather the view is rendered as an image onto the map. As a result, any listeners you set on the view are disregarded and you cannot distinguish between click events on various parts of the view. You are advised not to place interactive components — such as buttons, checkboxes, or text inputs — within your custom info window.

But if Google use it, there must be some way to make it. Does anyone have any idea?

I was looking for a solution to this problem myself with no luck, so I had to roll my own which I would like to share here with you. (Please excuse my bad English) (It's a little crazy to answer another Czech guy in English :-) )

The first thing I tried was to use a good old PopupWindow. It's quite easy - one only has to listen to the OnMarkerClickListener and then show a custom PopupWindow above the marker. Some other guys here on StackOverflow suggested this solution and it actually looks quite good at first glance. But the problem with this solution shows up when you start to move the map around. You have to move the PopupWindow somehow yourself which is possible (by listening to some onTouch events) but IMHO you can't make it look good enough, especially on some slow devices. If you do it the simple way it "jumps" around from one spot to another. You could also use some animations to polish those jumps but this way the PopupWindow will always be "a step behind" where it should be on the map which I just don't like.

At this point, I was thinking about some other solution. I realized that I actually don't really need that much freedom - to show my custom views with all the possibilities that come with it (like animated progress bars etc.). I think there is a good reason why even the google engineers don't do it this way in the Google Maps app. All I need is a button or two on the InfoWindow that will show a pressed state and trigger some actions when clicked. So I came up with another solution which splits up into two parts:

First part:
The first part is to be able to catch the clicks on the buttons to trigger some action. My idea is as follows:

Here is the MapWrapperLayout's source code:

All this will make the views inside the InfoView "live" again - the OnClickListeners will start triggering etc.

Second part: The remaining problem is, that obviously, you can't see any UI changes of your InfoWindow on screen. To do that you have to manually call Marker.showInfoWindow. Now, if you perform some permanent change in your InfoWindow (like changing the label of your button to something else), this is good enough.

But showing a button pressed state or something of that nature is more complicated. The first problem is, that (at least) I wasn't able to make the InfoWindow show normal button's pressed state. Even if I pressed the button for a long time, it just remained unpressed on the screen. I believe this is something that is handled by the map framework itself which probably makes sure not to show any transient state in the info windows. But I could be wrong, I didn't try to find this out.

What I did is another nasty hack - I attached an OnTouchListener to the button and manually switched it's background when the button was pressed or released to two custom drawables - one with a button in a normal state and the other one in a pressed state. This is not very nice, but it works :). Now I was able to see the button switching between normal to pressed states on the screen.

There is still one last glitch - if you click the button too fast, it doesn't show the pressed state - it just remains in its normal state (although the click itself is fired so the button "works"). At least this is how it shows up on my Galaxy Nexus. So the last thing I did is that I delayed the button in it's pressed state a little. This is also quite ugly and I'm not sure how would it work on some older, slow devices but I suspect that even the map framework itself does something like this. You can try it yourself - when you click the whole InfoWindow, it remains in a pressed state a little longer, then normal buttons do (again - at least on my phone). And this is actually how it works even on the original Google Maps app.

Anyway, I wrote myself a custom class which handles the buttons state changes and all the other things I mentioned, so here is the code:

Here is a custom InfoWindow layout file that I used:

And finally source code of a test activity, which glues all this together:

That's it. So far I only tested this on my Galaxy Nexus (4.2.1) and Nexus 7 (also 4.2.1), I will try it on some Gingerbread phone when I have a chance. A limitation I found so far is that you can't drag the map from where is your button on the screen and move the map around. It could probably be overcome somehow but for now, I can live with that.

I know this is an ugly hack but I just didn't find anything better and I need this design pattern so badly that this would really be a reason to go back to the map v1 framework (which btw. I would really really like to avoid for a new app with fragments etc.). I just don't understand why Google doesn't offer developers some official way to have a button on InfoWindows. It's such a common design pattern, moreover this pattern is used even in the official Google Maps app :). I understand the reasons why they can't just make your views "live" in the InfoWindows - this would probably kill performance when moving and scrolling map around. But there should be some way how to achieve this effect without using views.

I see that this question is already old but still...

We made a sipmle library at our company for achieving what is desired - An interactive info window with views and everything. You can check it out on github.

Here's my take on the problem. I create AbsoluteLayout overlay which contains Info Window (a regular view with every bit of interactivity and drawing capabilities). Then I start Handler which synchronizes the info window's position with position of point on the map every 16 ms. Sounds crazy, but actually works.

Demo video: https://www.youtube.com/watch?v=bT9RpH4p9mU (take into account that performance is decreased because of emulator and video recording running simultaneously).

Code of the demo: https://github.com/deville/info-window-demo

For those who couldn't get choose007's answer up and running

If clickListener is not working properly at all times in chose007's solution, try to implement View.onTouchListener instead of clickListener. Handle touch event using any of the action ACTION_UP or ACTION_DOWN. For some reason, maps infoWindow causes some weird behaviour when dispatching to clickListeners.

Edit : This is how I did it step by step

First inflate your own infowindow (global variable) somewhere in your activity/fragment. Mine is within fragment. Also insure that root view in your infowindow layout is linearlayout (for some reason relativelayout was taking full width of screen in infowindow)

Just a speculation, I have not enough experience to try it... )-:

Since GoogleMap is a fragment, it should be possible to catch marker onClick event and show custom fragment view. A map fragment will be still visible on the background. Does anybody tried it? Any reason why it could not work?

The disadvantage is that map fragment would be freezed on backgroud, until a custom info fragment return control to it.

I have build a sample android studio project for this question. 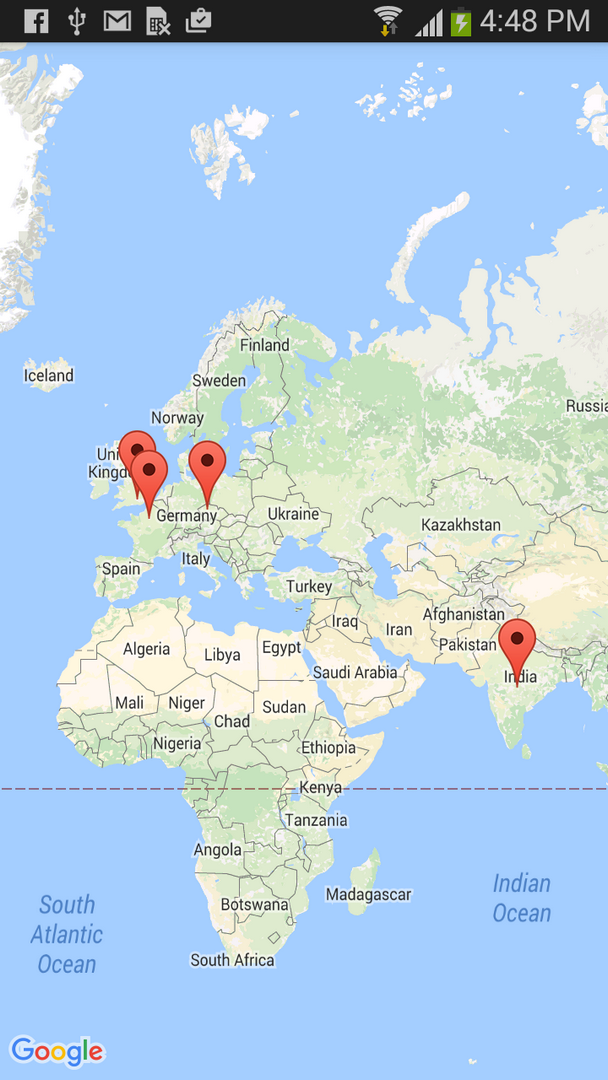 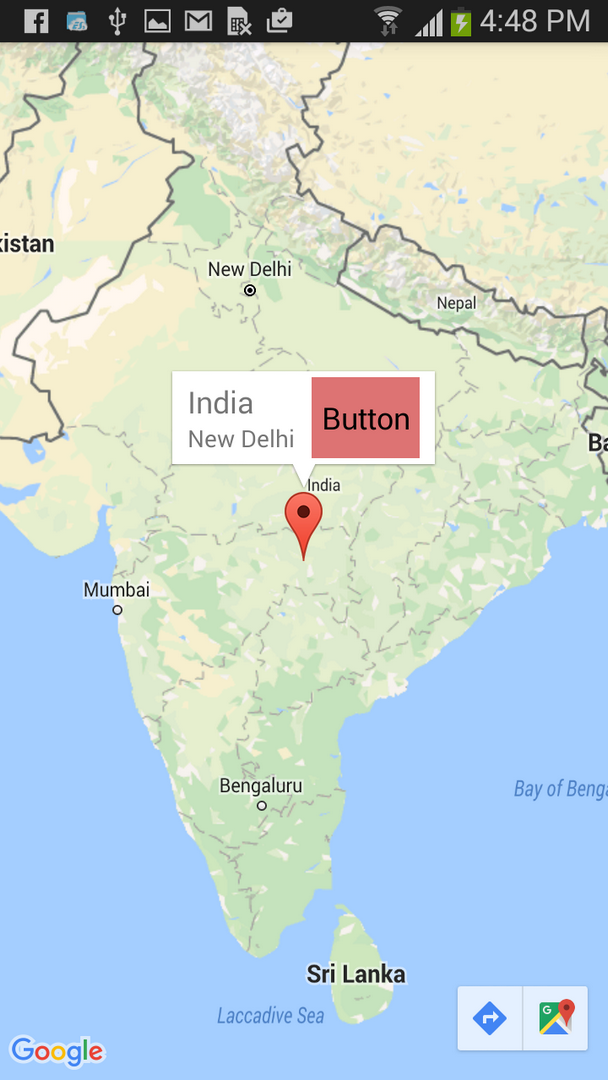 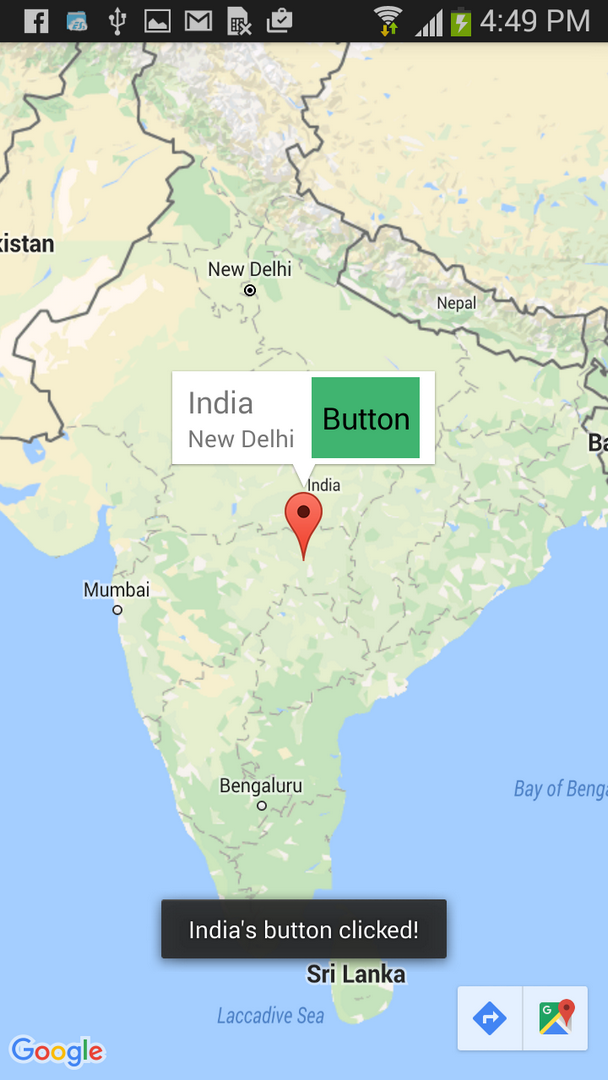 Please note: you have to add your API key in Androidmanifest.xml

It is really simple.

Just add above code in your class where you are using GoogleMap. R.layout.info_window_layout is our custom layout that is showing the view that will come in place of infowindow. I just added the textview here. You can add additonal view here to make it like the sample snap. My info_window_layout was

I hope it will help. We can find a working example of custom infowindow at http://wptrafficanalyzer.in/blog/customizing-infowindow-contents-in-google-map-android-api-v2-using-infowindowadapter/#comment-39731

EDITED : This code is shows how we can add custom view on infoWindow. This code did not handle the clicks on Custom View items. So it is close to answer but not exactly the answer that's why It is not accepted as answer.