How to enforce the left-to-right node ordering in GraphViz rank layout?

I am visualizing a collection of process with GraphViz. Each process consists of some Read or Write operations in program order. Naturally, it is desirable to arrange the operations in the left-to-right order with respect to each process.

I am sorry to say that I am not allowed to post the output picture with too low reputation. If you can run the code, you will see that the result is not so satisfying due to the out of order in process with pid = 3. Specifically, GraphViz layout algorithm has rearranged the (ideal) order "wf2-> wz2 -> wa1 -> wx3" to "wx3, wf2, wz2, wa1". Therefore, my problem is:

My Problem: How to enforce the left-to-right node ordering in the rank environment?

With exploring in this site, I have found some similar problems and potential solutions. However, they just did not work in my specific example: 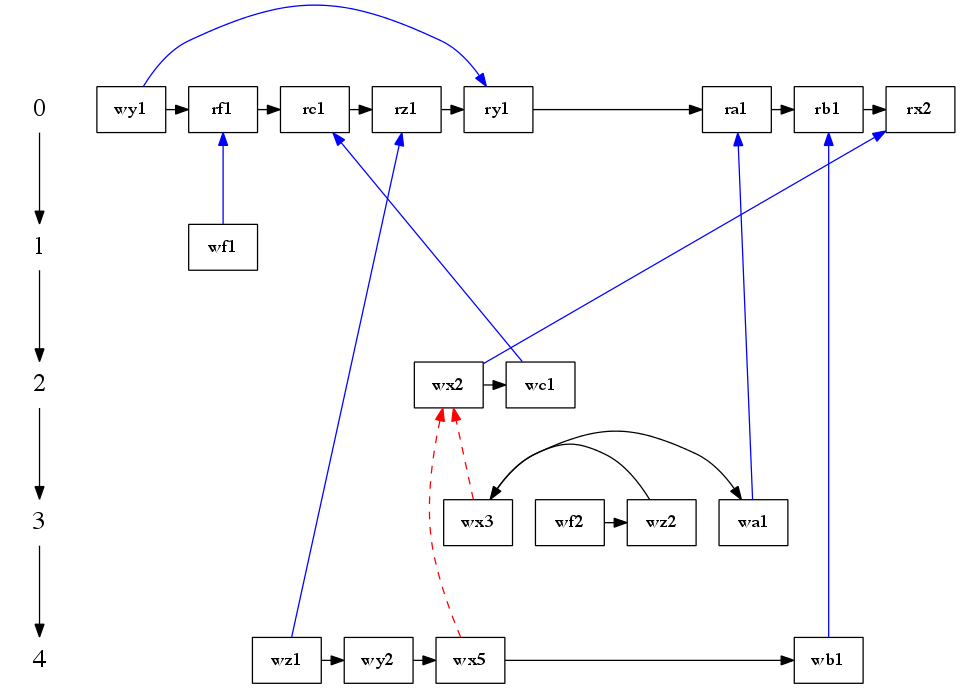 I am not quite sure that i've correctly got your problem, but try using this and comment please if it is what you want. I've added invisible edges for correct ranking of nodes and used rankdir to use left-right layout.

Not the answer you're looking for? Browse other questions tagged layout graphviz graph-visualization or ask your own question.

9
How do you force rank on a node in dot?
8
graphviz: direction of edges in terms of color
6
How does a script optimally layout a pure hierarchical graphviz/dot graph?
1
Why does Graphviz/Dot act so weirdly to this particular code?
1
What is the best way to draw large graph using graphvis
2
Grouping nodes with the same color near each other in graphviz
4
How to prevent edge labels from messing up the layout in graphviz?
1
Random position of nodes in hierarchical tree with alternate paths
7
How to change the background color of a edge label in GraphViz