In one of my tables Fee in column "ReceiptNo" in SQL Server 2012 database identity increment suddenly started jumping to 100s instead of 1 depending on the following two things. 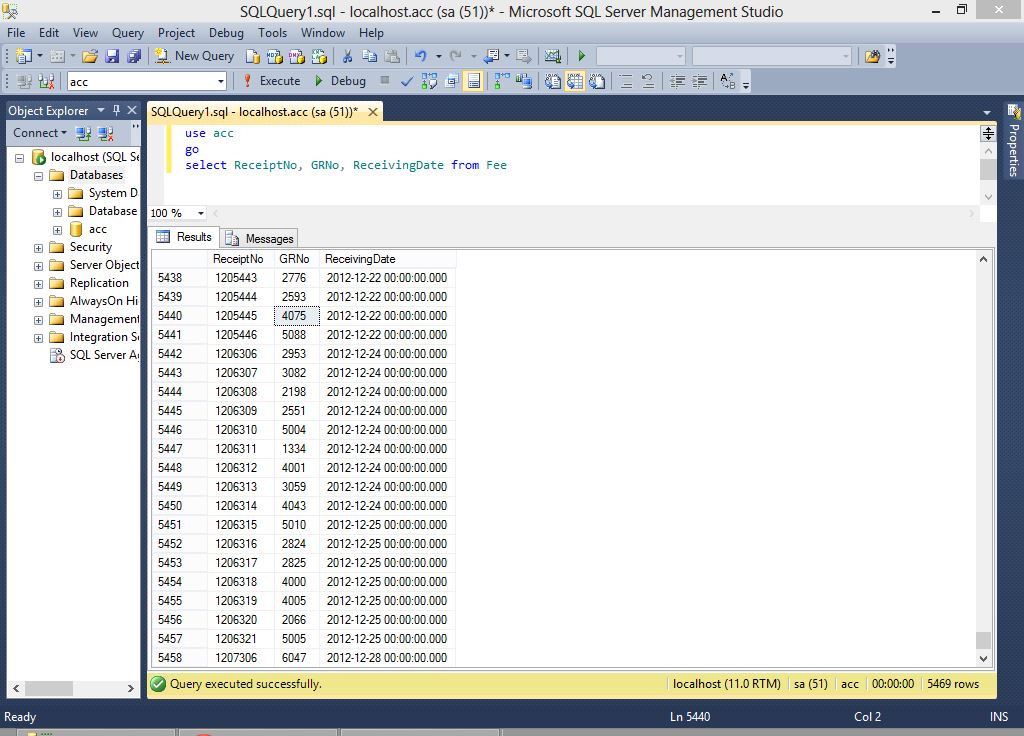 You are encountering this behaviour due to a performance improvement since SQL Server 2012.

It now by default uses a cache size of 1,000 when allocating IDENTITY values for an int column and restarting the service can "lose" unused values (The cache size is 10,000 for bigint/numeric).

This is mentioned in the documentation

SQL Server might cache identity values for performance reasons and some of the assigned values can be lost during a database failure or server restart. This can result in gaps in the identity value upon insert. If gaps are not acceptable then the application should use its own mechanism to generate key values. Using a sequence generator with the NOCACHE option can limit the gaps to transactions that are never committed.

Unless you are restarting the service with unusual frequency any "lost" values are unlikely to make any significant dent in the range of values allowed by the datatype so the best policy is not to worry about it.

If this is for some reason a real issue for you some possible workarounds are...

You should be aware none of these workarounds assure no gaps. This has never been guaranteed by IDENTITY as it would only be possible by serializing inserts to the table. If you need a gapless column you will need to use a different solution than either IDENTITY or SEQUENCE

This problems occurs after restarting the SQL Server.

From SQL Server 2017+ you could use ALTER DATABASE SCOPED CONFIGURATION:

Enables or disables identity cache at the database level. The default is ON. Identity caching is used to improve INSERT performance on tables with Identity columns. To avoid gaps in the values of the Identity column in cases where the server restarts unexpectedly or fails over to a secondary server, disable the IDENTITY_CACHE option. This option is similar to the existing SQL Server Trace Flag 272, except that it can be set at the database level rather than only at the server level.

This example disables the identity cache.

I know my answer might be late to the party. But i have solved in another way by adding a start up stored procedure in SQL Server 2012.

Then add it in to Start up by using following syntax.

This is still a very common issue among many developers and applications regardless of size.

Unfortunately the suggestions above do not fix all scenarios, i.e. Shared hosting, you cannot rely on your host to set the -t272 startup parameter.

Also, if you have existing tables that use these identity columns for primary keys, it is a HUGE effort to drop those columns and recreate new ones to use the BS sequence workaround. The Sequence workaround is only good if you are designing the tables new from scratch in SQL 2012+

Bottom line is, if you are on Sql Server 2008R2, then STAY ON IT. Seriously, stay on it. Until Microsoft admits that they introduced a HUGE bug, which is still there even in Sql Server 2016, then we should not upgrade until they own it and FIX IT.

Microsoft straight up introduced a breaking change, i.e. they broke a working API that no longer works as designed, due to the fact that their system forgets their current identity on a restart. Cache or no cache, this is unacceptable, and the Microsoft developer by the name of Bryan needs to own it, instead of tell the world that it is "by design" and a "feature". Sure, the caching is a feature, but losing track of what the next identity should be, IS NOT A FEATURE. It's a fricken BUG!!!

I will share the workaround that I used, because My DB's are on Shared Hosting servers, also, I am not dropping and recreating my Primary Key columns, that would be a huge PITA.

Instead, this is my shameful hack (but not as shameful as this POS bug that microsoft has introduced).

Before your insert commands, just reseed your identity before each insert. This fix is only recommended if you don't have admin control over your Sql Server instance, otherwise I suggest reseeding on restart of server.

Just those 3 lines immediately before your insert, and you should be good to go. It really won't affect performance that much, i.e. it will be unnoticeable.

There are many possible reasons for jumping identity values. They range from rolled back inserts to identity management for replication. What is causing this in your case I can't tell without spending some time in your system.

You should know however, that in no case you can assume an identity column to be contiguos. There are just too many things that can cause gaps.

You can find a little more information about this here: http://sqlity.net/en/792/the-gap-in-the-identity-value-sequence/

Not the answer you're looking for? Browse other questions tagged sql sql-server sql-server-2012 identity-column or ask your own question.

1310
SQL Server - Best way to get identity of inserted row?
3117
Add a column with a default value to an existing table in SQL Server
2071
How to return only the Date from a SQL Server DateTime datatype
2076
How to check if a column exists in a SQL Server table
2260
How to concatenate text from multiple rows into a single text string in SQL Server
1964
LEFT JOIN vs. LEFT OUTER JOIN in SQL Server
4098
How do I UPDATE from a SELECT in SQL Server?
1567
Find all tables containing column with specified name - MS SQL Server
1625
How can I delete using INNER JOIN with SQL Server?