Unable to determine a valid ordering for dependent operations

This is my model

And this is my error

Unable to determine a valid ordering for dependent operations. Dependencies may exist due to foreign key constraints, model requirements, or store-generated values.

Another possible cause of this is if the foreign key property is set incorrectly.

For example, this can happen in the following scenario:

I ran into this exception once when I mapped one object to another and I incorrectly set the foreign key to zero instead of setting it to null.

I can't say that this configuration is what is causing your exception without seeing the actual values of the properties, but it is one possibility.

In my case it was caused by nesting a new dependent object inside a another new object during create something like this:

Removing the nested reference and assigning the child in after the primary object was created solved the problem.

So apparently EF does something special with zero for self-referencing navigation properties. I know that the relation was defined correctly because my query that uses it pulled the correct data.

I was able to resolve my issue by using null instead of zero. That was really the proper value for me anyway.

In this case create the object you show above first, SaveChanges, then create the Faq child object, add it to the collection and set it as the Reply and then SaveChanges again.

Here is how we resolved this problem. We have entity which had defined sql query to populate entities. This entity had one column marked as key and had insert, update and delete CRUD methods. Key column was auto-populated with Oracle stored procedure and returned back in a cursor. We got this error when inserting new row.

We removed the key column parameter from the insert SP and the problem was resolved.

I created a sample project that simulates the error when you have two relations. Basically the idea is that you have a customer with a list of orders. Then on the customer you want to store an additional property to mark the current order. This leads to "two" relations which the entity framework has issues on storing and deleting in one transactions.

It's better to create a bool flag "IsCurrent" on the orders and filter for that. Its also possible to create a Property or Extension on the Customer that does the filtering automatically. This was already explained in this post.

I think there is no other way except using two calls to SaveChanges which is bad because you then throw away the UnitOfWork idea.

Probably late but I had the same problem and solved it as this. in case there is a parent, add the child to parent children property, if not just save the object.

So I ran into this problem and I want to share the way I solved it, it is not as simple as calling saving changes twice, but it has some advantages over that method.

I had a situation where I wanted all the records to either succeed or fail, partial inserts of the children were not acceptable. I also didn't want to write code to delete the parent, if the child fails (what if there was a bug in that code, what if that code failed, etc.).

Secondly, it was possible to have a group of records, and I wanted all those records to succeed or fail in one transaction. Essentially, I got very specific with EF (my EF version is 6.1.3). Also I was only going one level deep in the parent child relationship, not an arbitrary number of levels deep.

It worked and it also insert my data, in a visually appealing way (at least for me) 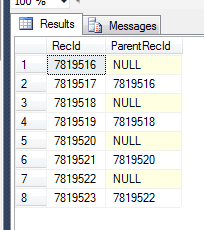 Boom I get: {"Unable to determine a valid ordering for dependent operations. Dependencies may exist due to foreign key constraints, model requirements, or store-generated values."}

The Office table has an identity ID which we don't set. So.. EF uses 0. Well, we have an ID=0 record in the Office table (root office for us in this recursive self-reference table).

To resolve this, we set the Identity ID to -1. So no more conflict in an existing key. The -1 is ultimately ignored and the identity is set.

Not the answer you're looking for? Browse other questions tagged entity-framework or ask your own question.

17
Clean way to deal with circular references in EF?
5
more than one navigation to the same entity
1
Entity Framework: Foreign Key in code first
0
How to specify two navigation relations for ef/breeze (“Unable to determine a valid ordering”)?
0
Saving related entities at once - An error occurred while saving entities that do not expose foreign key properties for their relationships
0
Entity Framework 6 - Creating record with Autonumber ID throws DbUpdateException
1
Entity Framework 4: inheritance and Associations