I am working on a handwriting application on iOS. I found the sample project "GLPaint" from iOS documentation which is implemented by OpenGL ES, and I did something modification on it.

I track the touch points and calculate the curves between the points and draw particle images alone the curve to make it looks like where the finger passby.

What I got is a solid line which looks quite good. But now I want to draw semi-transparent highlight instead of solid line. So I replace the particle image with a 50% transparency one without changing code. 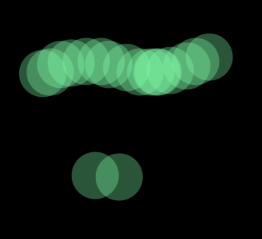 There is something wrong with blend.

I draw three points using the semi-transparency particle image, and the intersection area should keep 50% transparency.

Im maybe two years later answering that question, but i hope it helps somebody who comes here looking for a solution to this problem, like it happened to me.

You are going to need to assign to each cirle a different z value. It doesn't matter how big or small this difference is, we only need them to not be strictly equal.

First, you disable writing in the color buffer glColorMask(false,false,false,false) , and then draw the circles normally. The Z-buffer will be updated as desired, but no circles will be drawn yet.

Then, you enable writing in the color buffer (glColorMask(true,true,true,true) ) and set the depthFunc to LEQUAL ( glDepthFunc(GL_LEQUAL) ). Only the nearest circle pixels will pass the depth test (Setting it to LEQUAL instead of EQUAL deals with some rare but possible floating point approximation errors). Enabling blending and drawing them again will produce the image you wanted, with no transparency overlap.

You have to change the blend function. You can play around it with:

Maybe (GL_ONE, GL_ONE), forgot how to handle your case, but the solution is in that function.

Late reply but hopefully useful for others.

Another way to avoid that effect is to grab the color buffer before transparent circles are drawn (ie. do a GrabPass) and then read and blend manually with the opaque buffer in the fragment shader of your circles.

Not the answer you're looking for? Browse other questions tagged ios opengl-es transparency alpha overlap or ask your own question.

1230
How can I develop for iPhone using a Windows development machine?
362
Determine if two rectangles overlap each other?
1754
How can I make a UITextField move up when the keyboard is present - on starting to edit?
4
Why can't my fragment shader read alpha information when I switch to an alpha-only (A8) pixelFormat?
471
SVG fill color transparency / alpha?
0
Transparent png texture in cocos2d using opengl iphone
684
How to make a background 20% transparent on Android
1578
Using Auto Layout in UITableView for dynamic cell layouts & variable row heights