I want to use SSIS /BIDS project in Visual Studio 2012.

However I cannot seem to find any help on integrating BIDS with VS 2012.

I came across few question on SO related to this topic but all of them had integration with 2010 and not 2012.

I know that with MS SQL 2012 I get a SQL Server Data Tool. Does this mean that Visual Studio 2012 and BIDS cannot be integrated ?

I had to update the solution here since one of the answers I received partially solved the issue. The Answer provided by did solve the issue @user2141936 but I kept on getting an BlockMixedArchitectureInstall error while updating an existing instance.

It worked without with creating a new instance!!

Side Note : Installing the update broken my publishing database project onto 2012 server. You need to download and install a DACFramework patch for it.

Welcome to Microsoft Marketing Speak hell. With the 2012 release of SQL Server, the BIDS, Business Intelligence Designer Studio, plugin for Visual Studio was renamed to SSDT, SQL Server Data Tools. SSDT is available for 2010 and 2012. The problem is, there are two different products called SSDT.

There is SSDT which replaces the database designer thing which was called Data Dude in VS 2008 and in 2010 became database projects. That a free install and if you snag the web installer, that's what you get when you install SSDT. It puts the correct project templates and such into Visual Studio.

There's also the SSDT which is the "BIDS" replacement for developing SSIS, SSRS and SSAS stuff. As of March 2013, it is now available for the 2012 release of Visual Studio. The download is labeled SSDTBI_VS2012_X86.msi Perhaps that's a signal on how the product is going to be referred to in marketing materials. Download links are

None the less, we have Business Intelligence projects available to us in Visual Studio 2012. And the people did rejoice and did feast upon the lambs and toads and tree-sloths and fruit-bats and orangutans and breakfast cereals 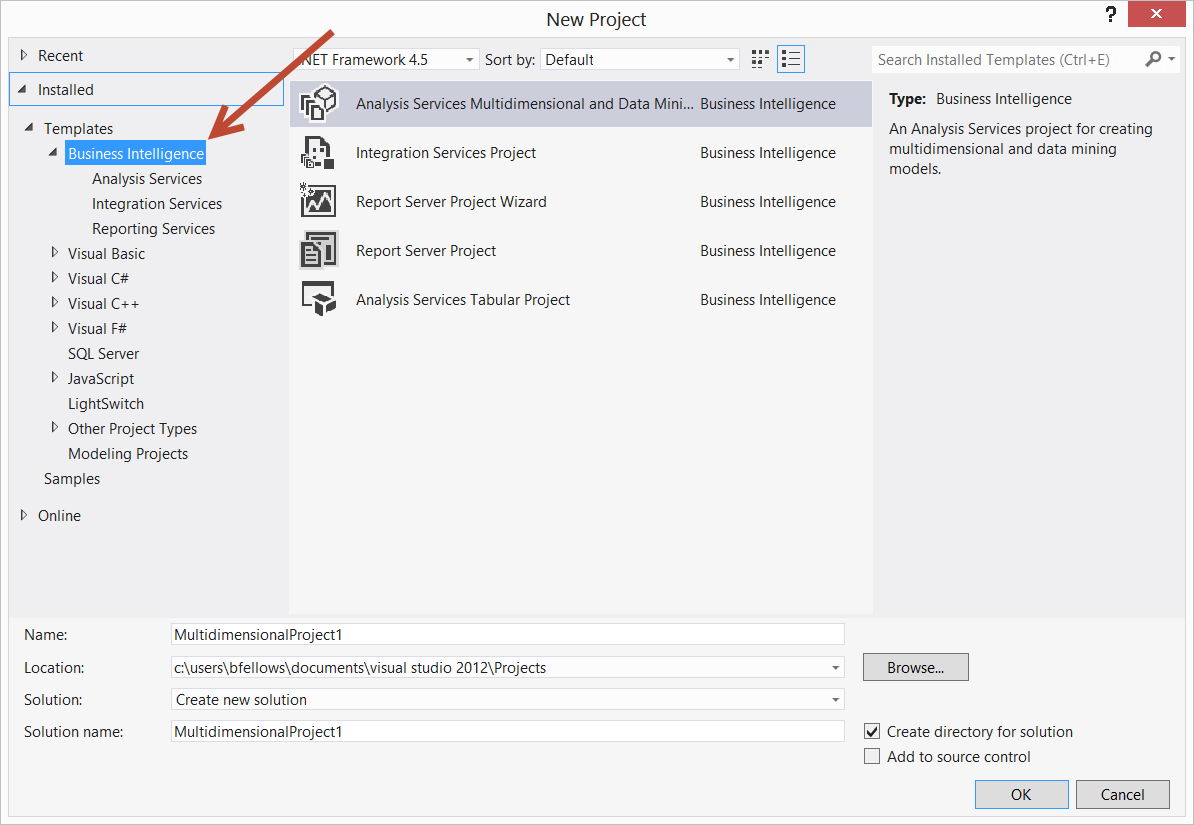 The download/install is named to ensure you get the SSDT templates that contain the Business Intelligence projects. The setup for these tools is now available from the web and can be downloaded in multiple languages right here: http://www.microsoft.com/download/details.aspx?id=36843

Basically this question has the title ...Visual Studio 2012 / 2013 What about ALL the improvements and changes to VS 2015 ??? SSDT has been updated and changed. The entire way of doing various additions and updates is different.

So having vented / rant - I did open a VS 2015 update 2 instance and proceeded to open an existing solution that include a .rptproj project. Now this computer does not yet have sql server installed on it yet.

Click on Update button and wait a long time and SSDT then installs and close visual studio 2015 and re-open and it works for me.

2
SQL Server Data Tools in VS Community
1
How do I open SSRS (.rptproj) and SSIS (.dtproj) files in Visual Studio 2015?
9
How to increase MaximumErrorCount in SQL Server 2008 Jobs or Packages?
12
Anyway to deploy a SSIS 2012 project built in VS 2013?
5
Is a licensed version of Visual Studio required for SSIS solution?
3
SQL Server data tools in visual studio 2015
0
SSIS Balanced Data Distributor 2014 SP1 for VS 2012 doesn't work
1
SSDT Business Intelligence with Visual Studio 2013 install error “The .NET Framework 4.5.1 is required”
0
Visual Studio 2012 opens packages as line of text instead of package?
0
Can I develop reports in Visual Studio 2013 without having a local copy of SQL Server?
See more linked questions