I've stumbled upon the weird way (in my view) that Matlab is dealing with empty matrices. For example, if two empty matrices are multiplied the result is:

Now, this already took me by surprise, however, a quick search got me to the link above, and I got an explanation of the somewhat twisted logic of why this is happening.

However, nothing prepared me for the following observation. I asked myself, how efficient is this type of multiplication vs just using zeros(n) function, say for the purpose of initialization? I've used timeit to answer this:

Both have the same outcome of 1000x1000 matrix of zeros of class double, but the empty matrix multiplication one is ~350 times faster! (a similar result happens using tic and toc and a loop)

After reading your feedback, I have looked more carefully into this peculiarity, and tested on 2 different computers (same matlab ver though 2012a) a code that examine the run time vs the size of matrix n. This is what I get: 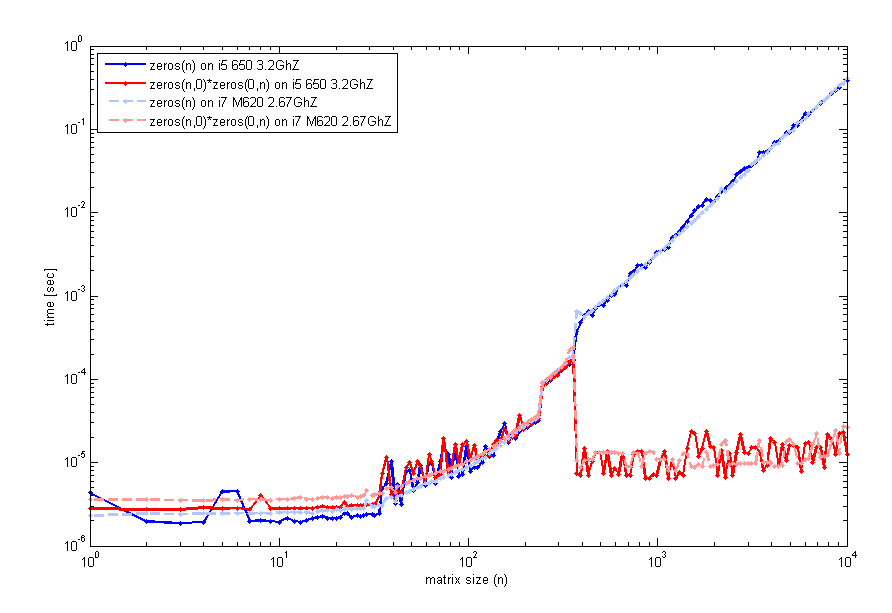 The code to generate this used timeit as before, but a loop with tic and toc will look the same. So, for small sizes, zeros(n) is comparable. However, around n=400 there is a jump in performance for the empty matrix multiplication. The code I've used to generate that plot was:

Are any of you experience this too?

Incidentally, empty matrix multiplication is not needed to get this effect. One can simply do:

where n> some threshold matrix size seen in the previous graph, and get the exact efficiency profile as with empty matrix multiplication (again using timeit). 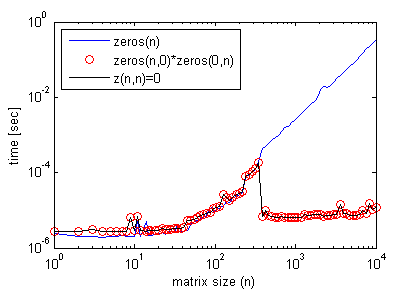 Here's an example where it improves efficiency of a code:

However, using z(n,n)=0; instead yields similar results to the zeros(n) case.

This is strange, I am seeing f being faster while g being slower than what you are seeing. But both of them are identical for me. Perhaps a different version of MATLAB ?

EDIT can you add + 1 for the end of f and g, and see what times you are getting.

I am using a machine remotely, so sorry about the low quality graphs (had to generate them blind). 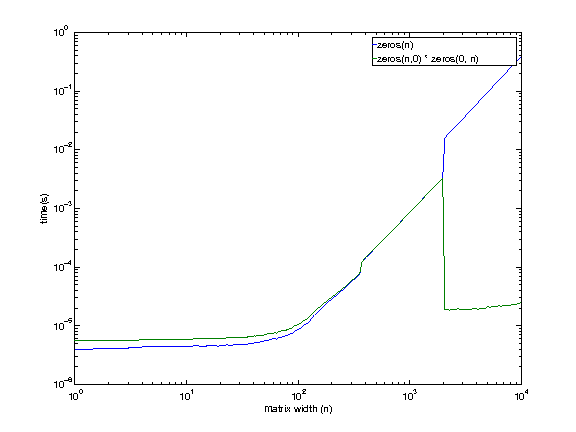 It looks like even the machine I have access to shows this behavior, except at a larger size (somewhere between 1979 and 2073). There is no reason I can think of right now for the empty matrix multiplication to be faster at larger sizes.

I will be investigating a little bit more before coming back.

After @EitanT's post, I wanted to do a little bit more of digging. I wrote some C code to see how matlab may be creating a zeros matrix. Here is the c++ code that I used.

Here are the results.

Now I went back to matlab to check for the same. Here are the results.

So the divergence is explained by the following

The results might be a bit misleading. When you multiply two empty matrices, the resulting matrix is not immediately "allocated" and "initialized", rather this is postponed until you first use it (sort of like a lazy evaluation).

The same applies when indexing out of bounds to grow a variable, which in the case of numeric arrays fills out any missing entries with zeros (I discuss afterwards the non-numeric case). Of course growing the matrix this way does not overwrite existing elements.

So while it may seem faster, you are just delaying the allocation time until you actually first use the matrix. In the end you'll have similar timings as if you did the allocation from the start.

Example to show this behavior, compared to a few other alternatives:

The result shows that if you sum the elapsed time for both instructions in each case, you end up with similar total timings:

The other timings were:

These measurements are too small in the milliseconds and might not be very accurate, so you might wanna run these commands in a loop a few thousand times and take the average. Also sometimes running saved M-functions is faster than running scripts or on the command prompt, as certain optimizations only happen that way...

Either way allocation is usually done once, so who cares if it takes an extra 30ms :)

A similar behavior can be seen with cell arrays or arrays of structures. Consider the following example:

Note that even if they are all equal, they occupy different amount of memory:

In fact the situation is a bit more complicated here, since MATLAB is probably sharing the same empty matrix for all the cells, rather than creating multiple copies.

The cell array a is in fact an array of uninitialized cells (an array of NULL pointers), while b is a cell array where each cell is an empty array [] (internally and because of data sharing, only the first cell b{1} points to [] while all the rest have a reference to the first cell). The final array c is similar to a (uninitialized cells), but with the last one containing an empty numeric matrix [].

I looked around the list of exported C functions from the libmx.dll (using Dependency Walker tool), and I found a few interesting things.

Regarding the last point about the memory allocator, you could write a similar benchmark in C/C++ similar to what @PavanYalamanchili did, and compare the various allocators available. Something like this. Remember that MEX-files have a slightly higher memory management overhead, since MATLAB automatically frees any memory that was allocated in MEX-files using the mxCalloc, mxMalloc, or mxRealloc functions. For what it's worth, it used to be possible to change the internal memory manager in older versions.

Here is a more thorough benchmark to compare the discussed alternatives. It specifically shows that once you stress the use of the entire allocated matrix, all three methods are on equal footing, and the difference is negligible.

Below are the timings averaged over 100 iterations in terms of increasing matrix size. I performed the tests in R2013a.

After doing some research, I've found this article in "Undocumented Matlab", in which Mr. Yair Altman had already come to the conclusion that MathWork's way of preallocating matrices using zeros(M, N) is indeed not the most efficient way.

He timed x = zeros(M,N) vs. clear x, x(M,N) = 0 and found that the latter is ~500 times faster. According to his explanation, the second method simply creates an M-by-N matrix, the elements of which being automatically initialized to 0. The first method however, creates x (with x having automatic zero elements) and then assigns a zero to every element in x again, and that is a redundant operation that takes more time.

In the case of empty matrix multiplication, such as what you've shown in your question, MATLAB expects the product to be an M×N matrix, and therefore it allocates an M×N matrix. Consequently, the output matrix is automatically initialized to zeroes. Since the original matrices are empty, no further calculations are performed, and hence the elements in the output matrix remain unchanged and equal to zero.

Interesting question, apparently there are several ways to 'beat' the built-in zeros function. My only guess as to why this is happening would be that it could be more memory efficient (after all, zeros(LargeNumer) will sooner cause Matlab to hit the memory limit than form a devestating speed bottleneck in most code), or more robust somehow.

Here is another fast allocation method using a sparse matrix, i have added the regular zeros function as a benchmark:

2
MATLAB: Faster pre-allocation of zeros-matrix
4
Matlab allocating A=zeros(N) vs. A(N,N)=0 yields strange performance results
287
Why malloc+memset is slower than calloc?
17
We need to preallocate. But MATLAB does not preallocate the preallocation?
5
Is there a fast(er) way to remove all non-diagonal elements from a square matrix?
2
Pivot to binary matrix from categorial array
4
Fastest way to initialize a double array of a non-standard value
1
improve loop performance in MATLAB
4
Performance of vectorizing code to create a sparse matrix with a single 1 per row from a vector of indexes
3
Creation of mxArray *without* memory allocation/initialization
See more linked questions