I'm wondering, if Dijkstra's algorithm will work properly when there is more than one direct connection in an undirected graph.

I want to use Dijkstra to find the fastest path but, there's an additional condition. Sum of all additional_data on the edges can't be >= x. So, if it came out that edge with weight: 3 was wrong to use, my program would try with the 2nd edge.

edit: My task is to find the fastest path, under the additional condition that the sum of additional_data from the edges can not be higher than x. Could you tell me how to handle this problem?

edit2: (setting up on a bounty)

I've been researching internet alot untill I've found this link. There's an explanation of how to do the thing I'm asking for. (Upper-Intermediate acapite)

I'm trying to use it somehow for 2 days now but I'm worried I do not understand this algorithm correctly. I'd like to ask some of you to help me with this problem, by explaining me a little more on example (few first steps). Here's the example: 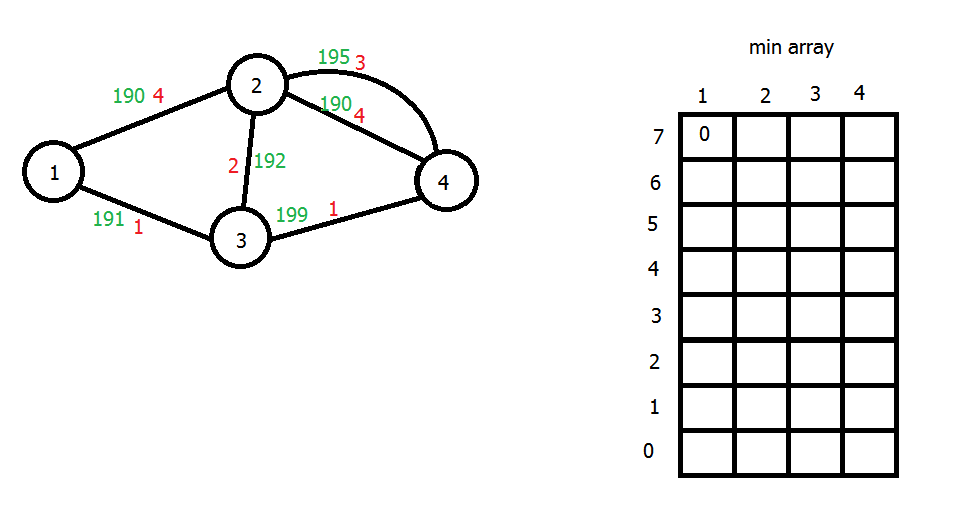 More formally, you can transform your original graph into another graph, and then apply Dijkstra to that graph. Assuming that the additional_data cost is always an integer, the transformation is:

EDIT: I have implemented the modified Dijkstra's algorithm: https://bitbucket.org/twic/roadsproblem. The crux of it is in src/solver.py.

Here is an explanation of how the algorithm you have found will handle your example problem.

The problem is to find the shortest path between node one and node four with the extra condition that the accumulated cost along the way should not be more than 7.

So how does the algorithm find this? The first step is to set up the matrix minArray(i,j) just like you have done. The element (i,j) of the array holds the distance you must travel to get to node j with exactly i money remaining. 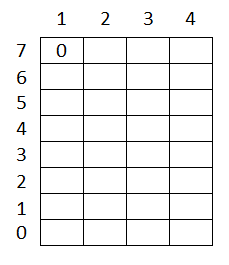 Starting out there are no visited elements and since we are starting at node one with 7 "monies" the top left element is set to zero. The empty spaces in the table above correspond to values that are set to infinity in the array.

Next, we find the lowest value of the array, this is the zero at position (remaining money, node) = (7,1). This element is set to visited (the state of an element is kept track of using a matrix visitedArray of the same size as minArray) which means that we have selected node one. Now all nodes that connect to node one are updated with values by traversing the corresponding edges. 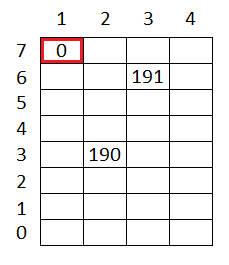 Now we again find the lowest unvisited element (which is minArray(3,2) = 190), set it to visited and update all elements that connect to it. This means that the distance is accumulated and the remaining money is calculated by subtracting the cost from the current value. 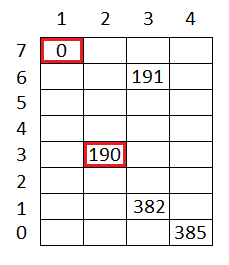 Note that it is too expensive to go back to node one from node two. 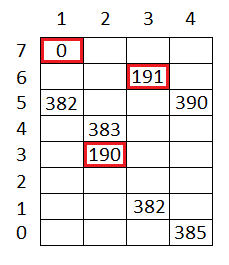 Three steps later the array looks like this. Here the two elements that equal 382 and the one that equals 383 have been selected. Note that the value of an element is only updated if it is an improvement of (i.e. lower than) the current value. 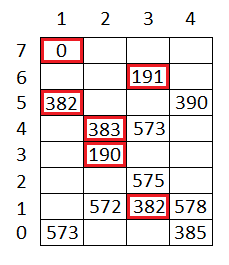 The array continues to fill up until all elements are either visited or still have infinite value. 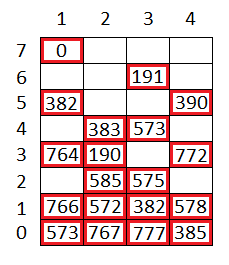 The final step is to find the total distance by finding the lowest value of column four. We can see that the minimal value, minArray(0,4) = 385 corresponds to the correct solution.

Note: If all values of column four would have been infinite, it would mean that there is no valid solution. The algorithm also specifies that if there are multiple values of equal and minimal distance in column four, the cheapest one is selected.

I do not think Dijkstra's algorithm is a good solution to this problem since the distance needed is not only the source node and destination. Here is a solution based upon A* search algorithm.\

Second, we perform a A* search based on priority queue with element like following structure(Use c code as example.) The priority queue will automatically get the weights_sum least in all the candidates. weights_expected is the best guess of the path through current node to destination node while weights_now is current weight

In A* search algorithm,

A* search will be still NP hard since in worst case it has to search each possible path. However it will be much faster than a simple DFS search and perform lots of search path cuts.

You could make a copy of the node with 0 cost between them that adds the 2nd possible path.

Not sure if this will work, but it's an idea.

The additional condition will break Dijkstra. Think of it like this: if you have a path A->B in a graph and an edge B->C in a graph, then the shortest path A->C that involves B is surely the minimum path of A->B->C. In your case this condition doesn't hold, because while A->B and B->C might be valid, A->B->C might not be valid.

Okay, this is the point where you grab a piece of paper and try this.

If you look at your graph, and assuming you want to go from (1) to (4), notice how you can eliminate (3) by introducing the following edges:

Once you have eliminated the all edges but a straight line, the problem becomes somewhat easier: for each node you can keep track of how much [distance, additional] it will cost to reach the goal. You don't have to store additional > max or 'remaining additional' < 0, since that's not a viable solution. Also, if you have multiple distances for equal additional, only the minimal distance should be kept.

The best solution is now the one with the minimal distance in the last node (or the first, depending on how you ordered it). If down the road, you kept pointers on how you got there (e.g. if you update the value in the matrix also store the element that made it change), you can backtrack the path as well.

Here you should note that you can do the same when the problem was in the non-eliminated form with the matrix you suggest: x-axis as nodes, y-axis as 'list per node'.

That should do it.

This problem is NP-complete. No algorithm is more efficient than the one explained by multiple people (Tom Anderson, user1884905).

Proof: By reducing of subset-sum for non-negative numbers.

Observe that the algorithm must minimize sum of weights, so it will also maximize sum of additional_data. So the paths of the first kind chosen will be the paths associated with numbers in the result of the subset-sum problem.

However, the problem of finding all possible paths between two vertices, is NP-Hard. A slightly modified version of DFS might be able to do the trick, but probably not in all cases.

Not the answer you're looking for? Browse other questions tagged c# algorithm dijkstra or ask your own question.

538
What algorithms compute directions from point A to point B on a map?
2
Shortest path with a fixed number of edges
1124
Easy interview question got harder: given numbers 1..100, find the missing number(s) given exactly k are missing
106
Negative weights using Dijkstra's Algorithm
0
Finding shortest path in non-weighted graphs
3
Dijkstra's algorithm with minimum edge
9
how to save shortest path in dijkstra algorithm
9
Dijkstra with Parallel edges and self-loop
1
Find the shortest path from source to target in a weighted-undirected graph in O(V + E) time