Here's the RAM usage of my background audio playing process: 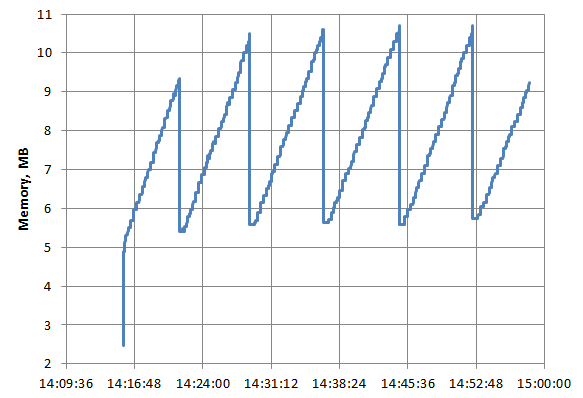 Is this a memory leak or no?

I'm concerned because if / when it exceeds 15MB, the OS will silently kill my player, which is undesirable.

Is there a way to view what occupies that memory? My MediaStreamSource implementation only allocates single 512kb buffer on the startup, and never allocates a single byte while playing. BTW, the stream bitrate is 96 kbit/sec, which is the same as memory allocation rate of the app.

Is there a way to make the GC to be less lazy, and sleep for less then 8 minutes? I don't really like those spikes…

Update 2013-04-21: looks like some OS update (most likely the 7.8) has fixed the issue. Thanks for that, Microsoft! However, next time please note it in the update history :-)