How to analyse JMeter result?

I am new in JMeter tool. Can anyone help me for the best way to analyse JMeter reports?

Simply list of related links you can possibly find useful:

There are 3 test that are must when doing performance testing, there should always be a baseline, a peak test and a stress test. These test relate to each other because of the little's law. The long-term average number of customers in a stable system L is equal to the long-term average effective arrival rate, λ, multiplied by the time a customer spends in the system, W; or expressed algebraically: L = λW..

Jmeter already provides means to check this values, the standar plugin provides plots for reponse times, hits as well as throughput. There is no way to directly tell how many users were active on the system, it is not the same concurrent users than active users. The plugins are enough to produce the reports, but they do not allow to control much of the presentation, i will use some plots produced using python(they add labels, and have 2 y axis).

Baseline Test: This case is an special case of the law, in this case the active users is constant and it is one, then:

If the application run the same piece of code, the response time will stabilize over time, then the arrival rate will be constant over time too.

There is a service that does nothing else than wait some time to go by: 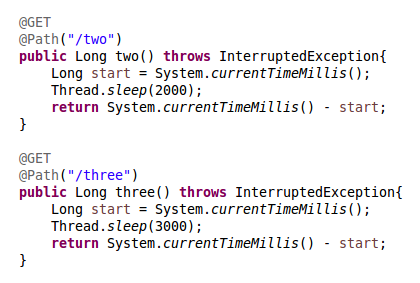 Peak Test: This is nother special case, in this case load incrase until it surpass the system thoughput, because the load is greater than throughput the response times do increase. During the test the threads number should increase fast enough to recover from long response times.

This time instead of running the peak, i will stress the system with more load than it is able to handle during the whole test. To control the service throughput:

The active transactions are those that had leave the injector but haven't get a reponse, those are transactions that are queue in some place whitin the system.

Because response times do grow as active users do, we will need the injector to create new threads as fast as new conections are requiered, most of the pool threads are going to be busy.

In simple word if you want to analyze your JMeter report...

Starting with version 3.0, JMeter includes a dynamic HTML report that can be generated either at the end of a load test or from a result file.

In order to analyze your JMeter results, you can use

In addition to all the other answers: there is a nice site of BlazeMeter where you can upload your test result file (.jtl) and it will generate all kinds of (interactive) reports for it. It even analyzes it for you and points out when the first error occurs, what the saturation point is, etc. https://sense.blazemeter.com/gui/

If you have a graphite/grafana infrastructure I can recommend to add the Backend Listener to the project. It will send real-time metrics to the graphite server and you can monitor the test in graphite (or grafana).

If you are new JMeter understanding JMeter listeners and other components will help you . check the tutorial - https://www.youtube.com/watch?v=FfDVIklNjgw

Not the answer you're looking for? Browse other questions tagged testing jmeter load-testing or ask your own question.

11
How to save jmeter Summary Report and other graphs (eg. Response Time Graph ) automatically
1
Jmeter,In 'view results in Table',what does Thread name(1-1,1-6..etc)?

2
Load Testing with JMeter - will it log into my site at load?
1
How to interpret JMeter result while doing Database testing
0
How to analyse Jmeter jp@gc graphs
1
Better jmeter report