The following PHP code does return me a runtime of about 3.5 seconds (measured multiple times and averaged):

When i run the same command over a ssh terminal, the runtime is reduced to about 0.6 seconds (measured with the command line tool time).

The version of the imagemagick library is

What could be the reason for this time difference?

One answer to a similar question here on stackoverflow was that the overhead comes from the Webserver having to start a thread/shell. Could this be really the reason? I thought threads are leightweight and don't take long at all to start/terminate.

Prior to calling exec i set the number of threads used by imagemagick (because this was/is a bug in OpenMP?, Reference) to 1 with exec('env MAGICK_THREAD_LIMIT=1');. The runtime from PHP does not change much, no matter what value i set for MAGICK_THREAD_LIMIT. Anyway there does not seem to be a bug in OpenMP on in this version because the runtime of the command line execution is ok.

Any suggestions of how i could improve the runtime of the above command would be greatly appreciated.

Thank you very much for your help.

When you log in to a Unix machine, either at the keyboard, or over ssh, you create a new instance of a shell. The shell is usually something like /bin/sh or /bin/bash. The shell allows you to execute commands.

When you use exec(), it also creates a new instance of a shell. That instance executes the commands you sent to it, and then exits.

When you create a new instance of a shell command, it has it's own environment variables. So if you do this:

Then you create two shells, and the setting in the first shell never gets to the second shell. To get the environment variable into in the second shell, you need something like this:

Now, if you think that the shell itself may be the problem, because it takes too long to make a shell, test it with something that you know takes almost no time:

At that point you know to try and find some way to make the shell instantiate faster.

I've been programming computers for over 56 years, but this is the first time I've encountered a bug like this. So I spent nearly a week trying to understand the 7X worse execution speed when executing a perl program from php via exec versus executing the perl program directly at the command line. As part of this effort, I also pored over all the times this issue was raised on the web. Here's what I found:

(1) This is a bug that was first reported in 2002 and has not been fixed in the subsequent 11 years.

(2) The bug is related to the way apache interacts with php, so both of those organizations pass the buck to the other.

(3) The bug is the same on exec, system, or any of the alternatives.

(4) The bug doesn't depend on whether the exec-ed program is perl, exe, or whatever.

(5) The bug is the same on UNIX and Windows.

(6) The bug has nothing to do with imagemagick or with images in general. I encountered the bug in a completely different setting.

(7) The bug has nothing to do with startup times for fork, shell, bash, whatever.

(8) The bug is not fixed by changing the owner of the apache service.

(9) I'm not sure, but I think it relates to vastly increased overhead in calling subroutines.

Having root access to the machine means that you can change the /etc/php5/php.ini memory limit settings.

Even without direct access to /etc/php5/php.ini you could check if your server supports overriding php.ini directives by creating a new php.ini file in you projects directory.

Even if the overrides are not permitted you can change your memory settings from .htaccess if AllowOverride is All.

Yet another means of changing the memory limit is by setting it during the PHP runtime using ini_set('memory_limit', 256);.

The only good thing about running the convert via exec() is if you don't plan on getting a result back from exec() and allowing it to run asynchronously:

The above approach is usually helpful if you're trying to batch process many files, you don't want to wait for them to finish processing and don't need confirmation regarding each having been processed.

Using the code above to make exec run async for processing a single file will cost more processor time and more memory than using GD/Imagick within PHP. The time/memory will be used by a different process that does not affect the PHP process (making the visitors feel the site moving faster), but the memory consumption exists and when it comes to handling many connections that will count.

This is not a PHP bug and has nothing to do with Apache/Nginx or any webserver.

I had the same issue lately and had a look at the PHP source code to check the exec() implementation.

The offender here is C's popen() which seems to be very slow. A quick google search on "c popen slow" will show you lots of questions such as yours.

I also found that someone implemented a function called popen_noshell() in C to overcome this performance problem:

Here is a screenshot showing the speed difference vs popen() and popen_noshell(): 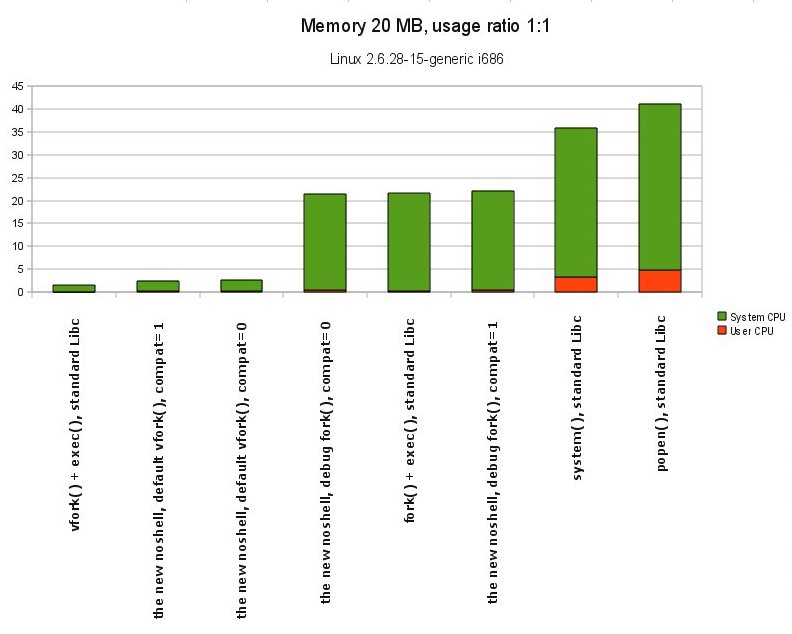 PHP's exec() uses the regular popen() - the one at the right of the screenshot above. The CPU used by the system when executing C's popen() is very high as you can see.

I see 2 solutions to this problem:

While searching for this, I discovered the PHP function of the same name as the C's one: popen()

It is interesting because one can execute an external command asynchronously with: pclose(popen('your command', 'r'));

Which essentially has the same effect as exec('your command &');

When you call exec php does not create a thread, It creats a new child process. Creating a new process is big overhead.

However when you connect with ssh you are just passing a command to execute. You are not owner of that program so it executes as the user whom you connected with. For exec its the user who runs PHP.

I have experienced this problem, a graphic processing command that when run via the command line would take about .025 seconds was taking about .3 seconds when called via exec() in PHP. Upon much research, it seems that most people believe this to be a problem with apache or PHP. I then tried running the command via a CGI script, bypassing PHP altogether, and i got the same result.

It seemed therefore the problem must be apache, so i installed lighttpd, and got the same result!

After some thought and experimentation i realized this must be a problem with processor priority. So if you want your commands to run with a similar speed as the command line it must be executed as follows.

PLEASE NOTE: I know there will be all sorts of security objections to this. I just wanted to focus simply in the answer that all you have to do is add nice before your command.

Not the answer you're looking for? Browse other questions tagged php performance runtime exec or ask your own question.

2773
How can I prevent SQL injection in PHP?
2582
Deleting an element from an array in PHP
3028
Improve INSERT-per-second performance of SQLite
2151
How do you parse and process HTML/XML in PHP?
4556
Reference — What does this symbol mean in PHP?
1543
Why does changing 0.1f to 0 slow down performance by 10x?
2055
How does PHP 'foreach' actually work?
2529
Why shouldn't I use mysql_* functions in PHP?
1444
Replacing a 32-bit loop counter with 64-bit introduces crazy performance deviations with _mm_popcnt_u64 on Intel CPUs