I'm building a mocha test in coffeescript. Right at the top of the test I have:

I'd like to stop on that debugger line because the object in theObject.coffee isn't being loaded. I'm using node-inspector and it works, sorta.

The process that I have is:

There must be an easier way. It seems like I should be able to have a debugger running and just have it stop on that debugger line, but I'm not able to find that.

I have WebStorm, which has a debugger (this article discusses setting it up to run mocha tests, but it didn't help me), but when I start it, it fails. The command that's running in the WebStorm debug window is:

I suspect that might be a windows specific issue.

The question: if you're starting from scratch with Mocha, what's the easiest way to get a debugger going that will stop on a debugger line easily? Easy is the keyword here.

Edit: since asking this I've stopped using Windows and am working in Ubuntu. My mocha debugging process (which I use infrequently) is the same.

Many weeks later, no answers. Here's the quickest path that I found.

In addition to @jcollum's answer above, I have found instead of using the --debug-brk flag, it is better to just use the --debug flag with -w (watch)

That way, when you add and remove debugger lines from your code, mocha will reload the tests automatically and your node-inspector will pause on the appropriate line.

This saves having to revisit the terminal constantly restarting the tests, then needlessly hitting "continue" in the debugger to get past the first line of the source.

With the latest versions of Mocha and node-inspector, this has been working great for me:

It loads up the local Mocha executable as the debugged process, stopping on the first line for you to set up your breakpoints.

Heads up on http://s-a.github.io/iron-node/. This is most efficient software to debug anything Node.js related. 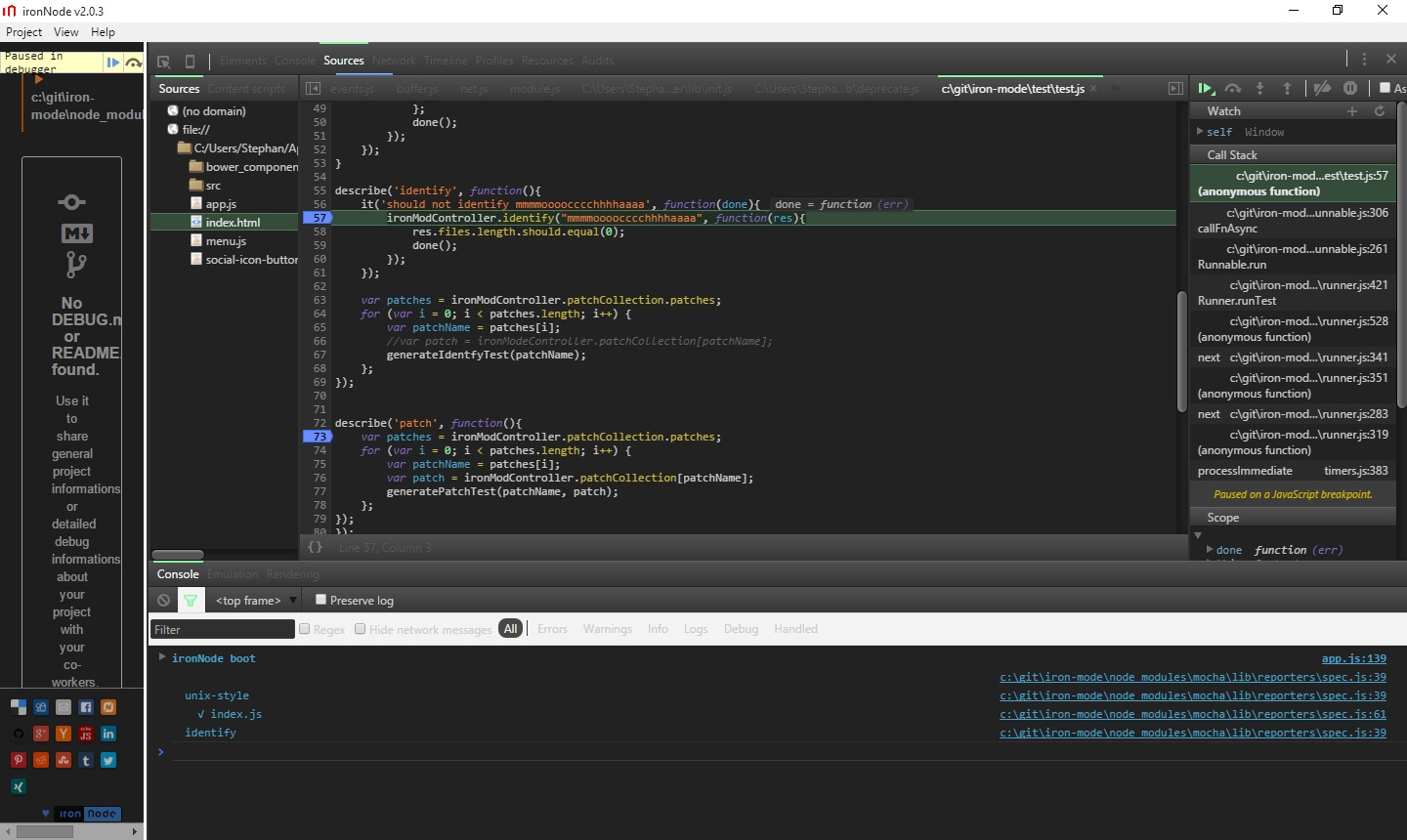 If it's a Node application, then using the integrated Node debugger from the command line is the quickest path to stardom:

In Webstorm now you can just set up using a mocha configuration. Worked pretty much out of the box for me:

It also shows you the parameters it runs with so you can probably copy them to another environment if you need to.

In regards to either Webstorm or PhpStorm, you can add a specific mocha debug configuration:

You'll have to add via the green, you might give it a name.

If the already installed mocha in the project via:

it will find the according module in your project.

I had to provide the correct path to my unit tests, and hit the mark for Include subdirectories/

Since my project is a typescript one I had to add:

For a pure js project it should not be necessary.

Now you can run the entire test suit, and you can then pick single test cases from the list and run them on and debug them on their own.

None of the existing answers mention the path of least resistance: When you need to debug Mocha tests, you can simply add another assert that checks the value you'd like to debug.

I find this is often all I need. And I just remove the extra assert(s) I used for debugging when I'm done.

A modern way to do this is to use nodejs's inspector integration feature. It's fairly simple to use. I've already written a detailed explanation of how to use it in this post

Not the answer you're looking for? Browse other questions tagged node.js unit-testing debugging coffeescript mocha or ask your own question.

68
What's the right way to enable the node debugger with mocha's --debug-brk switch?
394
How to increase timeout for a single test case in mocha
0
Mocha tests do not start selenium browser
3
In debug mode, mocha doesn't stop on debugger statements in a spec file when using node-inspector
4
debugging protactor (with / without webstorm)
2
Debugging with arbitrary NodeJS unit testing frameworks in WebStorm
9
How to Debug Grunt Mocha Task?
0
How do I debug a single unit test with node-inspectror?
3
Running Mocha tests in Webstorm