How does Hadoop process records split across block boundaries?

According to the Hadoop - The Definitive Guide

The logical records that FileInputFormats define do not usually fit neatly into HDFS blocks. For example, a TextInputFormat’s logical records are lines, which will cross HDFS boundaries more often than not. This has no bearing on the functioning of your program—lines are not missed or broken, for example—but it’s worth knowing about, as it does mean that data-local maps (that is, maps that are running on the same host as their input data) will perform some remote reads. The slight overhead this causes is not normally significant.

Suppose a record line is split across two blocks (b1 and b2). The mapper processing the first block (b1) will notice that the last line doesn't have a EOL separator and fetches the remaining of the line from the next block of data (b2).

How does the mapper processing the second block (b2) determine that the first record is incomplete and should process starting from the second record in the block (b2)?

Interesting question, I spent some time looking at the code for the details and here are my thoughts. The splits are handled by the client by InputFormat.getSplits, so a look at FileInputFormat gives the following info:

After that, if you look at the LineRecordReader which is defined by the TextInputFormat, that's where the lines are handled:

So since the splits are calculated in the client, the mappers don't need to run in sequence, every mapper already knows if it neds to discard the first line or not.

So basically if you have 2 lines of each 100Mb in the same file, and to simplify let's say the split size is 64Mb. Then when the input splits are calculated, we will have the following scenario:

Map Reduce algorithm does not work on physical blocks of the file. It works on logical input splits. Input split depends on where the record was written. A record may span two Mappers.

The way HDFS has been set up, it breaks down very large files into large blocks (for example, measuring 128MB), and stores three copies of these blocks on different nodes in the cluster.

HDFS has no awareness of the content of these files. A record may have been started in Block-a but end of that record may be present in Block-b.

To solve this problem, Hadoop uses a logical representation of the data stored in file blocks, known as input splits. When a MapReduce job client calculates the input splits, it figures out where the first whole record in a block begins and where the last record in the block ends.

In cases where the last record in a block is incomplete, the input split includes location information for the next block and the byte offset of the data needed to complete the record.

Have a look at below diagram. 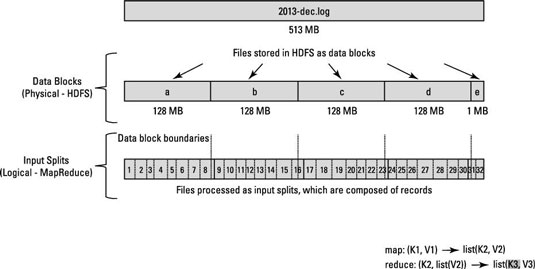 Have a look at this article and related SE question : About Hadoop/HDFS file splitting

More details can be read from documentation

The Map-Reduce framework relies on the InputFormat of the job to:

I see it as following: InputFormat is responsible to split data into logical splits taking into account the nature of the data.
Nothing prevents it to do so, although it can add significant latency to the job - all the logic and reading around the desired split size boundaries will happen in the jobtracker.
Simplest record aware input format is TextInputFormat. It is working as following (as far as I understood from code) - input format create splits by size, regardless of the lines, but LineRecordReader always :
a) Skip first line in the split (or part of it), if it is not the first split
b) Read one line after the boundary of the split in the end (if data it is available, so it is not the last split).

From what I've understood, when the FileSplit is initialized for the first block, the default constructor is called. Therefore the values for start and length are zero initially. By the end of processing of the fist block, the if the last line is incomplete, then the value of length will be greater than the length of the split and it'll read the first line of next block as well. Due to this the value of start for the first block will be greater than zero and under this condition, the LineRecordReader will skip the fist line of the second block. (See source)

From hadoop source code of LineRecordReader.java the constructor: I find some comments :

from this I believe hadoop will read one extra line for each split(at the end of current split, read next line in next split), and if not first split, the first line will be throw away. so that no line record will be lost and incomplete

The mappers do not have to communicate. The file blocks are in HDFS and can the current mapper(RecordReader) can read the block that has the remaining part of the line. This happens behind the scenes.

Not the answer you're looking for? Browse other questions tagged hadoop split mapreduce block hdfs or ask your own question.

0
Does hadoop job submitter while calculating splits takes record boundries into account?
39
How does Hadoop perform input splits?
20
About Hadoop/HDFS file splitting
3
are files divided into blocks for storing in HDFS?
7
JSON object spans multiple lines, How to split input in Hadoop
7
How to read files with an offset from Hadoop using Java
4
Hadoop MapReduce RecordReader Implementation Necessary?
1
relation between number of input splits and number of mappers in mapreduce hadoop
1
Storing a large file in hadoop HDFS?
2
How does Apache Flink parallelize reading of a CSV file
See more linked questions

2545
How do you split a list into evenly sized chunks?
2298
How do I split a string on a delimiter in Bash?
712
Split Strings into words with multiple word boundary delimiters
1758
How to split a string in Java
4
Record Reader and Record Boundaries
2
MapReduce: How input splits are done when 2 blocks are spread across different nodes?
2
Do blocks in HDFS have byte-offset information stored in Hadoop?
10
Working with input splits(HADOOP)
0
Hadoop Data Blocks and Data Content
1
How Blocks gets converted into Records and what exactly is the definition of Record in Hadoop