This was fixed in Eclipse 2018-12. This behaviour is still default, but can be configured off - see the accepted answer for how

I'll leave the question as it was for posterity, and for those on earlier versions of Eclipse

In Eclipse, I've enabled intellisense-style suggestions for Java by going to

and setting the following

This works brilliantly, apart from one annoying problem. When I hit spacebar, the token being typed is autocompleted with whatever is at the top of the suggestions list. Fair enough, except that sometimes I'll type a class/variable name with an exact legal match, but this won't appear as the top suggestion. So when I naturally hit spacebar Eclipse inserts something completely wrong.

E.G. after typing Cookie I'll hit spacebar and get CookieMonster.

This seems like a bug, and happens often enough to be annoying, but even despite this I don't want spacebar to trigger autocomplete in general. I may want to type a variable name which hasn't been declared yet, or something similar. I want to use autocomplete as a helper tool, but my natural typing should always take priority over it.

I'd like to stop spacebar triggering autocomplete, and either fall back to using enter, or better still trigger autocomplete with a custom key not used in ordinary typing. Is any of this possible?

I've played around with all the settings in Content Assist to no avail. Googling the question just returns a bunch of results about disabling the autocomplete feature.

A patch for Bug 348857 was recently merged to the Eclipse project and was released as part of Eclipse 2018-12. You can download that version here.

You now have a new option to disable all insertion triggers apart from enter, which will prevent spacebar from causing autocompletion. 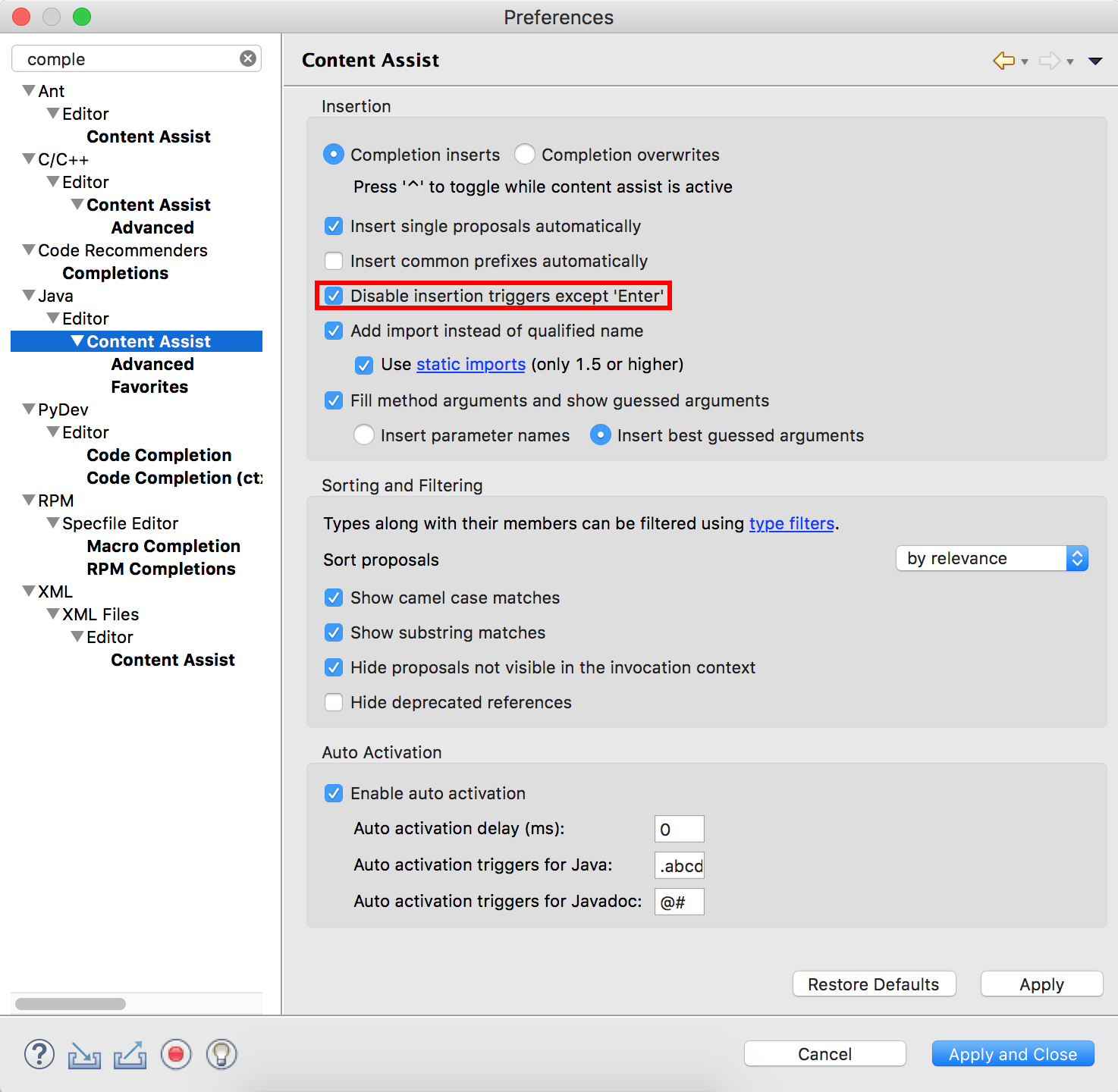 There is a solution on the issue tracker for this. Copy the jar in the eclipse/dropins folder. With the next restart space is diabled as autocompletion trigger.

Eclipse 12-2018 and newer: This is working natively, check Pyves answer.

Use a SDK version of eclipse

1.open Plug-ins View and find org.eclipse.jface.text, right click, choose import as Source Project. After import, you find it in your workspace.

Right click the project folder of org.eclipse.jface.text, choose export-->Deployable plugins and fragments, next, destination choose archive file, finish. Replace the one in eclipse/plugins with the one you generate.

The spacebar has been a key to select the autocomplete even in Indigo. To my knowledge, this can't be configured. In fact, that is probably why the delay exists.

I suggest setting the delay to some optimal value that allows you to type things like private void ... comfortably without triggering suggestions for private and void. Then in case you get a suggestion because you waited too long, press Escape to abort Content Assist.

Solution: Intercept (hook) SHIFT+SPACE (press and hold) on (editor-window) eclipse and replace it with ESC,SPACE (sequence). Now you my decide between

On windows you may use http://www.heise.de/download/activaid.html (you can also use AutoHotkey, java native hook, ...)

You may also remap keys on non-english keyboards with "HotStrings", e.g. ö->{,ä->} etc.

Finally worked it out.

Try download this org.eclipse.jface.text.jar and copy it to your plugin folder(Typically eclipse/plugin). Do not forget to backup your own one.

If the link doesn't work, comment on this, thanks.

In Eclipse go to Window -> Preferences -> General -> Keys and remove the binding for the command Content Assist.

You could disable Auto activation via the check box in

and activate the auto-complete feature on demand. The default hotkey for this is

94
Eclipse Intellisense?
22
Disable statement completion on space in Eclipse Content Assist
12
How can I keep Eclipse from filling in auto-completions when I type an opening parenthesis ('(')?
25
Eclipse: Instant autocompletion
10
Eclipse auto suggesting and filling in variable names
6
Validate Autocomplete in Eclipse
3
How to disable Non-Type proposals in Eclipse?
0
Stop Eclipse from autocompleting variable names on declaration