How to synchronize two Subversion repositories?

My company has a subsidiary with a slow Internet connection. Our developers there suffer to interact with our central Subversion server. Is it possible to configure a slave/mirror for them? They would interact locally with the server and all the commits would be automatically synchronized to the master server.

This should work as transparently as possible for the developers. Usability is a must.

Please, no suggestions to change our version control system.

Subversion 1.5 introduced proxy support when you're using http to host your repository. Developers can checkout their working copies from the slave. Then all read-only operations (diff, log, update etc) will use the slave. When committing, the slave transparently passes all write operation to the master.

It is possible but not necessarily simple: the problem you are trying to solve is dangerously close to setting up a distributed development environment which is not exactly what SVN is designed for.

You can use svn mirror as explained in the SVN book documentation to create a read-only mirror of your master repository. Your developers each interact with the mirror closest to them. However users of the slave repository will have to use

before they can commit and they will have to remember to relocate back on the slave once they are done. This could be automated using a wrapper script around the repository modifying commands on SVN if you use the command line client. Keep in mind that the relocate operation while fast adds a bit of overhead. (And be careful to duplicate the repository uuid - see the SVN documentation.)

[Edit - Checking the TortoiseSVN documentation it seems that you can have TortoiseSVN execute hook scripts client side. You may be able to create a pre/post commit script at this point. Either that or try to see if you can use the TortoiseSVN automation interface to do it].

svk is a set of Perl scripts which emulate a distributed mirroring service over SVN. You can set it up so that the local branch (the mirror) is shared by multiple developers. Then basic usage for the developers will be completely transparent. You will have to use the svk client for cherry picking, merging and starmerging. It is doable if you can get your head around the distributed concepts.

While I never used that myself, you could also have distant developers use git locally and use the git-svn gateway for synchronization.

It all depends on your development environment and the level of integration you require. Depending on your IDE (and if you can change SCM) you might want to have a look at other fully distributed SCMs (think Mercurial/Bazaar/Git/...) which support distributed development out of the box.

You should try The SVK version control system

If one of the repositories is fully read only you can use 'svnsync' to keep it up to date with the master repository. This tool is often used in combination with the proxy support to create a master slave setup.

E.g. Apache does this to mirror their repository to different continents. The master repostitory is located in the US, but if I access the repository from the EU I get a local mirror that works just as well as the master server.

The inotify-tools works well for me, details are mentioned on this website:

There is a commercial solution that provides true active-active replication (not master-slave) of Subversion repositories if you need performance and data safety beyond what svnsync provides called "Subversion MultiSite".

Disclaimer: I work for the company that makes this solution

VisualSVN Server's Multisite Repository Replication was designed for this case.

You can keep the master repository in your main office and setup multiple writeable slave repositories at the remote locations.

This should work as transparently as possible for the developers. Usability is a must. 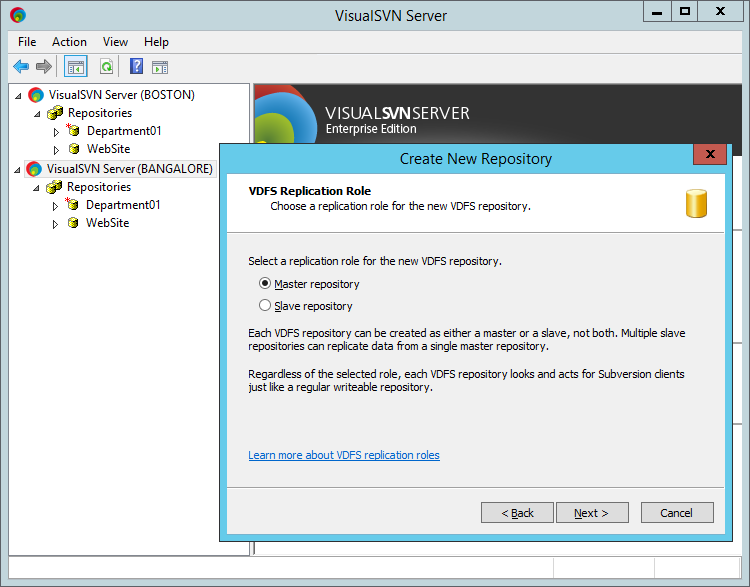 Not the answer you're looking for? Browse other questions tagged svn version-control synchronization or ask your own question.

4631
How do I discard unstaged changes in Git?
1493
How do I migrate an SVN repository with history to a new Git repository?
4331
How can I reset or revert a file to a specific revision?
8677
How do I undo 'git add' before commit?
955
Git workflow and rebase vs merge questions
20512
How do I undo the most recent local commits in Git?
6798
How do I force “git pull” to overwrite local files?
16512
How do I delete a Git branch locally and remotely?
8145
How do I rename a local Git branch?