mySQL Error 1040: Too Many Connection

still "Too many connection"

MySQL: ERROR 1040: Too many connections

These following reasons cause MySQL to run out connections.

I was able to overcome this issues by doing the followings.

You can change the setting to e.g. 200 by issuing the following command without having to restart the MySQL server.

Now when you restart MySQL the next time it will use this setting instead of the default.

Keep in mind that increase of the number of connections will increase the amount of RAM required for MySQL to run.

It is worth knowing that if you run out of usable disc space on your server partition or drive, that this will also cause MySQL to return this error. If you're sure it's not the actual number of users connected then the next step is to check that you have free space on your MySQL server drive/partition.

If you are running out of connections like this, chances are excellent that you are not closing the connections that you have open.

Review code that opens connections and ensure the connections are closed as soon as practical. Typically you want to make use of the using keyword around anything that implements IDisposable (including database connections) to ensure that such objects are disposed as soon as they leave the scope where they are needed.

You can check the current number of active connections with this query:

This error occurs, due to connection limit reaches the maximum limit, defined in the configuration file my.cnf.

In order to fix this error, login to MySQL as root user (Note: you can login as root, since, mysql will pre-allocate additional one connection for root user) and increase the max_connections variable by using the following command:

This change will be there, until next server restart. In order to make this change permanent, you have to modify in your configuration file. You can do this by,

This article has detailed step by step workaround to fix this error. Have a look at it, I hope it may help you. Thanks.

You have to change max_connections to increase total permitted connections.

And set max_user_connections back to default 0 => no limit unless you need to limit this per user connections.

MySQL Too many connections

In your program you would have opened the connections and left open without closing it.

I faced a same problem and finally identified.

I added this code, after try catch.

To see how many connections are configured for your DB to use:

To see how many are connected at the current time:

I also wrote this piece of software to help me create a nice spreadsheet of transactions over time so I can track down which queries are the problem: 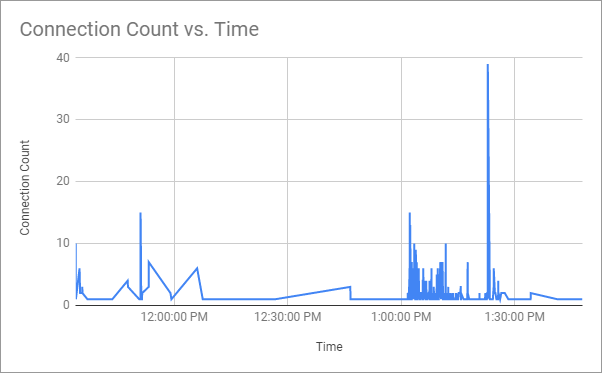 open the terminal and type this command : sudo gedit /etc/mysql/my.cnf

You can fix it by the following steps:

Login to MySQL and run this command: SET GLOBAL max_connections = 100;

Now login to MySQL, the too many connection error fixed. This method does not require server restart.

Using the above step1 you can resolve ths issue but max_connections will roll back to its default value when mysql is restarted.

In order to make the max_connection value permanent, update the my.cnf file.

Set into higher value and save the file.

Note: Before increasing the max_connections variable value, make sure that, the server has adequate memory for new requests and connections.

MySQL pre-allocate memory for each connections and de-allocate only when the connection get closed. When new connections are querying, system should have enough resources such memory, network and computation power to satisfy the user requests.

Also, you should consider increasing the open tables limit in MySQL server to accommodate the additional request. And finally. it is very important to close the connections which are completed transaction on the server.

I was getting this error even though I had all my Connections wrapped in using statements. The thing I was overlooking is how long those connections were staying open.

Remember that connection will not close until everything in the loop is done and if the loop creates more connections, they can really start adding up.

Check if your current running application is still accessing your mysql and has consumed all the DB connections.

So if you try to access mysql from workbench , you will get "too many connections" error.

stop your current running web application which is holding all those db connections and then your issue will be solved.

The issue noted clearly in https://dev.mysql.com/doc/refman/8.0/en/too-many-connections.html:

If clients encounter Too many connections errors when attempting to connect to the MySQL server, all available connections are in use by other clients.

I got resolved the issue after a few minutes, it seems that connection was been released by other clients, also I tried with restarting vs and workbench at same time.

If you are using windows go to the following path :

And add the below under the [mysqld] section :

Before increasing the max_connections variable, you have to check how many non-interactive connection you have by running show processlist command.

If you have many sleep connection, you have to decrease the value of the "wait_timeout" variable to close non-interactive connection after waiting some times.

374
Artificially create a connection timeout error
1449
Can I concatenate multiple MySQL rows into one field?
3097
Should I use the datetime or timestamp data type in MySQL?
525
Error installing mysql2: Failed to build gem native extension
1551
How to reset AUTO_INCREMENT in MySQL
359
ERROR 2006 (HY000): MySQL server has gone away
1135
MySQL error code: 1175 during UPDATE in MySQL Workbench
590
ERROR 2002 (HY000): Can't connect to local MySQL server through socket '/var/run/mysqld/mysqld.sock' (2)
2655
How do I import an SQL file using the command line in MySQL?
674
MySQL 8.0 - Client does not support authentication protocol requested by server; consider upgrading MySQL client