Why this code says echo is off?

What is wrong with this code? It says ECHO is off.

If your variable is empty somewhere, it will be the same as having the command "echo" on its own, which will just print the status of echo.

To avoid this, you should replace all your echo commands with something like this:

In batch files, blocks are completely parsed before they are executed.
While parsing, all percent expansion will be done, so it seems that your variables can't be changed inside a block.

It must be enabled, as per default the delayed expansion is disabled.

I used here the construct echo( instead of echo as this will ensure echoing an empty line even if the variable is empty.

Not sure, if this post is still read, but nevertheless. You should try the following: On top of the code right after @echo off you have to put in

Additionally anywhere you want to use variables changed in a block of brackets (like For-Loops or If's) you have to change the %into ! to get !varname!

This should be helping... 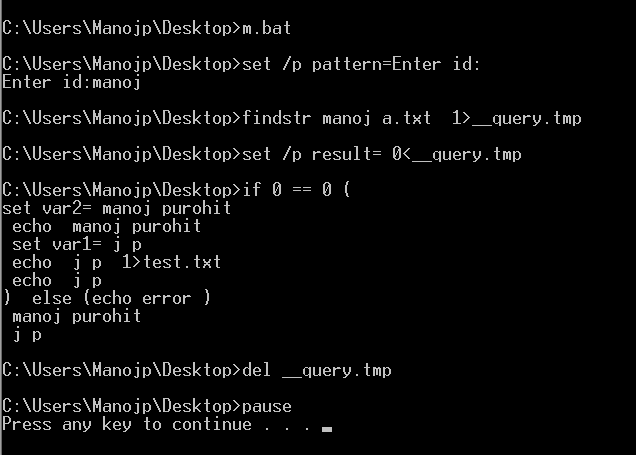 First create a file a.txt in the same directory u have this batch file ... write some text in that...Note: only Windows 2000 Windows ME Windows XP Windows Vista Windows 7 supports FINDSTR

run this bath file .. you will find a substring(start=5,length=3) of the first line of string you have in a.txt in a newly created file test.txt. Finally got it working !

The solution for your problem is to put the "echo"s after the if block is completed. Try this:

This way you can see the solution as you wanted. Cheers! ;]

Not the answer you're looking for? Browse other questions tagged windows batch-file cmd or ask your own question.

734
How can I echo a newline in a batch file?
674
How do I shutdown, restart, or log off Windows via a bat file?
906
How do I get the application exit code from a Windows command line?
265
Windows batch: echo without new line
1025
Can't start Eclipse - Java was started but returned exit code=13
0
Placing 2 for loops inside a findstr inside another for loop
0
launching the xml files
4
batch file writing changed files of a git commit into variables
0
How to Echo text that includes ">>"