What's the difference between deque and list STL containers?

What is the difference between the two? I mean the methods are all the same. So, for a user, they work identically.

From the (dated but still very useful) SGI STL summary of deque:

The main way in which deque differs from vector is that deque also supports constant time insertion and removal of elements at the beginning of the sequence. Additionally, deque does not have any member functions analogous to vector's capacity() and reserve(), and does not provide any of the guarantees on iterator validity that are associated with those member functions.

Here's the summary on list from the same site:

A list is a doubly linked list. That is, it is a Sequence that supports both forward and backward traversal, and (amortized) constant time insertion and removal of elements at the beginning or the end, or in the middle. Lists have the important property that insertion and splicing do not invalidate iterators to list elements, and that even removal invalidates only the iterators that point to the elements that are removed. The ordering of iterators may be changed (that is, list::iterator might have a different predecessor or successor after a list operation than it did before), but the iterators themselves will not be invalidated or made to point to different elements unless that invalidation or mutation is explicit.

In summary the containers may have shared routines but the time guarantees for those routines differ from container to container. This is very important when considering which of these containers to use for a task: taking into account how the container will be most frequently used (e.g., more for searching than for insertion/deletion) goes a long way in directing you to the right container.

std::deque, on the other hand, is implemented more like std::vector. It has constant access time by index, as well as insertion and removal at the beginning and end, which provides dramatically different performance characteristics than a list.

Another important guarantee is the way each different container stores its data in memory:

Note that the deque was designed to try to balance the advantages of both vector and list without their respective drawbacks. It is a specially interesting container in memory limited platforms, for example, microcontrollers.

The memory storage strategy is often overlooked, however, it is frequently one of the most important reasons to select the most suitable container for a certain application.

No. A deque only supports O(1) insertion and deletion at the front and back. It may, for example, be implemented in a vector with wrap-around. Since it also guarantees O(1) random access, you can be sure it's not using (just) a doubly linked list.

You can check also the following Link, which compares the performance between the two STL containers (with std::vector)

Hope i shared some useful informations.

The performance differences have been explained well by others. I just wanted to add that similar or even identical interfaces are common in object-oriented programming -- part of the general methodology of writing object-oriented software. You should IN NO WAY assume that two classes work the same way simply because they implement the same interface, any more than you should assume that a horse works like a dog because they both implement attack() and make_noise().

Here's a proof-of-concept code use of list, unorded map that gives O(1) lookup and O(1) exact LRU maintenance. Needs the (non-erased) iterators to survive erase operations. Plan to use in a O(1) arbitrarily large software managed cache for CPU pointers on GPU memory. Nods to the Linux O(1) scheduler (LRU <-> run queue per processor). The unordered_map has constant time access via hash table.

I've made illustrations for the students in my C++ class. This is based (loosely) on (my understanding of) the implementation in the GCC STL implementation ( https://github.com/gcc-mirror/gcc/blob/master/libstdc%2B%2B-v3/include/bits/stl_deque.h and https://github.com/gcc-mirror/gcc/blob/master/libstdc%2B%2B-v3/include/bits/stl_list.h) 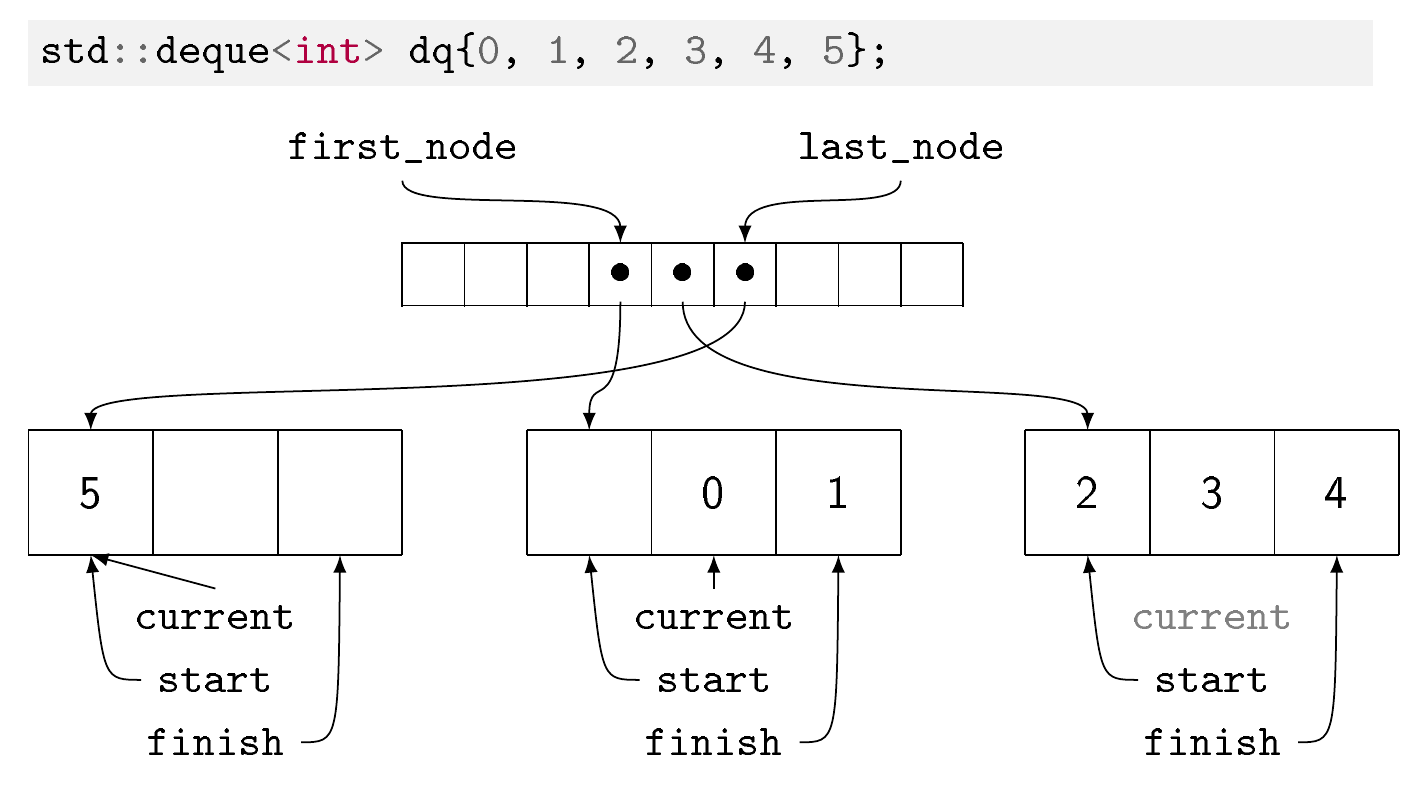 Elements in the collection are stored in memory blocks. The number of elements per block depends on the size of the element: the bigger the elements, the fewer per block. The underlying hope is that if the blocks are of a similar size no matter the type of the elements, that should help the allocator most of the time.

You have an array (called a map in the GCC implementation) listing the memory blocks. All memory blocks are full except the first one which may have room at the beginning and the last which may have room at the end. The map itself is filled from the center outwards. This is how, contrarily to a std::vector, insertion at both ends can be done in constant time. Similarly to a std:::vector, random access is possible in constant time, but requires two indirections instead of one. Similarly to std::vector and contrarily to std::list, removing or inserting elements in the middle is costly because you have to reorganize a large part of the datastructure. 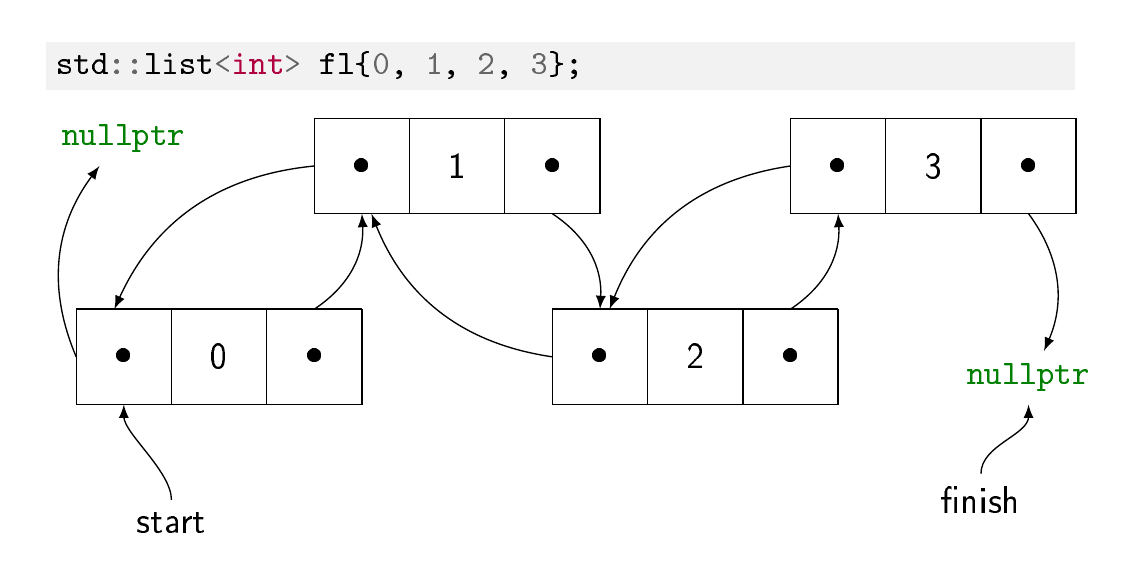 Doubly-linked list are perhaps more usual. Every element is stored in its own memory block, allocated independently from the other elements. In each block, you have the element's value and two pointers: one to the previous element, one to the next element. It makes it very easy to insert element at any position in the list, or even to move a subchain of elements from one list to another (an operation called splicing): you just have to update the pointers at the beginning and end of the insertion point. The downside is that to find one element by its index, you have to walk the chain of pointers, so random access has a linear cost in the numbers of elements in the list.

Not the answer you're looking for? Browse other questions tagged c++ list stl deque or ask your own question.

182
Non-recursive depth first search algorithm
27
How to store objects without copy or move constructor in std::vector?
6
std::deque or std::list
-1
C++ How do iterators for non-contiguous containers like deque find the next element