My programs are blocked by avast anti-virus

I'm an amateur programmer, and I'm getting desperate and mad because of a big issue: most of my programs are blocked by avast anti-virus, while some aren't, and I don't understand why. The more I try to investigate, the less I understand what the problem could be.

I'm requesting your help to find a solution so that my programs are no longer blocked, or, as a default, at least some strong clues that would explain why it might be the case. There are already many topics about that on the web. However, most of them give only superficial answers: they just explain how anti-virus works with signatures and detection heuristics, or state that you just have to add the offending application in the white list without asking any other question. While it is certainly correct, it's not acceptable answers in my sens, because I'm still left with my own programs that refuse to work without any concrete idea to start investigating.

First of all, the only anti-virus that blocks my programs is avast 7.x. No other anti-virus see any inconvenient to run my software. Secondly, I haven't avast myself; it is installed on a friend's machine. I have windows 7, he has windows XP. I'm completely sure that the problem is avast only: when it is temporarily disabled, or if the program is added to its white list, everything works nicely as expected.

Three different programs are in trouble :

The first one is open source, I can give a link to the executable and the source code if needed. The two others are closed source but free to use, I can give a link to the executable of the current version only. the only obvious common things between these three programs are me as a developer, my windows 7 machine that compiled them, the compiler family which is MinGW/GCC, and they are all win32 GUI applications without any framework (no MFC, no WPF, no QT, WXWidgets or whatever; just pure win32/C GUI applications)

Here are my observations and though so far :

The problem is caused by avast 7.x auto-sandbox. The following happens when one try to start a program disliked by avast :

From there, I made the following deductions :

Additionally to that, I also though that the fact I'm distributing my programs as portable zip files may be a reason for avast to block, and conversely, the fact that a program is well installed in program files may be a reason to trust it more. So I made a simple experience: I compiled a new inno-setup 5 installer for the beta 2.0.0 of my game, as well as one for the version 1.3 of my text editor, and discover that the installers themselves were blocked !

I made another experience with my friend, where I tried to find exactly the place where the programs crash, based on using MessageBeep (MessageBox is also blocked !). I didn't noticed anything problematic. The game is blocked when SetDlgItemText is called for the first time in the login dialog box, but if I remove all SetDlgItemText it is blocked further down. IN the text editor, it is blocked while populating the menu bar...

My conclusion is, there is something that avast don't like in the new version of my game, in the old versions of my text editor, and in my audio player. Something that is absent in the newest version of my text editor. What could it be ? Do you have any clue ? Do you have only an idea on how I could proceed to find what it is so that I can hope to fix it ? Is there only a way to analyse such a problem, or is the hole world screwed by avast?

Note that I'm a single person and not a company, all those programs are free to use, I have not pay any IDE to develop them, and I'm not paid by the users when they use them, so I assume that a certificate is probably not affordable at all. Moreover, I don't know if it's a true solution, how to sign an application compiled with GCC, and I really don't want to switch to an "usine à gaz" like MSVC. I would prefer strongly forget that option if there is any other solution, even a very dirty one.

Thank you for reading.

A nice way to increment the confidence of all AV software is to digitally sign your code. Thawte has the cheapest well-recognized certificates starting below 100 € / year.

I recently ran into a new situation when code signing was not an option - I write open source for Joomla in php. After I received the first indications that Avast marked my file as a (false) positive, I contacted them and they whitelisted my file within hours.

In order to make my life easier, I am creating a separate file with the supposedly "dangerous" function, so that future changes to the program won't require to re-submit it for whitelisting.

Possibly the speed in their response was helped by the fact that reading a short php file is faster than reverse engineering compiled code; nonetheless they were kind, quick and effective.

If your program is dereferencing pointers, writing 200 bytes into a 100 byte buffer or similar, chances are you will generate code that is similar to a signature of a known attack. (since most attacks exploit these kinds of programming errors)

You should debug your code (if on linux try valgrind or efence) and make sure that memory is handled correctly.

It illustrate how antivirus can literally go nuts when dealing with small programs linking a simple C run-time library.

The only thing you can do is signal the problem to the antivirus makers and hope in a fair behavior from them.

Alright figured it out go to your avast settings and there is an area where you can add exceptions settings>antivirus then you scroll down that menu and there is an area titled EXCLUSIONS where you can browse to your visual studio path ie. c:>john>documents>visualStudio2010>projects::: select your project path and it will add it to a list of scanning exceptions and you should be able to test run your files... worked well for me. I also disabled deep scan in the same menu due to a suggestion from another member

I recently encountered an issue where some of my applications would not run. They would show up as processes (under windows), but never under the application tab within the Task Manager. The Processes typically had around 120K memory size, and sometimes there would be multiple processes.

The culprit is Avast DeepScreen. From Avast: "The DeepScreen Technology allows Avast to make real-time decisions when an unknown file is executed".

In my case Matlab was blocked, as were some other applications.

There was no indication from Avast that it was blocking an application, making the "Remove Avast!" comment above quite appropriate.

A comment above refers to 'if you're de-referencing pointers'. If you use C or C++ that's what your program will do - that's how they work.

And as carpetsmoker says it's no use fixing your own Avast settings, it's all the people who want to download your software but are spooked by Avast.

This is what's causing your troubles.

It doesn't even bother with the heuristics.

If there is no authenticode signature, it WILL consider it suspicious, and send it to avast for them to scan, and until they declare its' okay you won't be able to run it. Once they have declared it okay, then all other with avast can run it safely if it matches their version.

Most of the antivirus programs give options to enable exception.

Go to the antivirus setting and add your c or c++ files folder in exception. 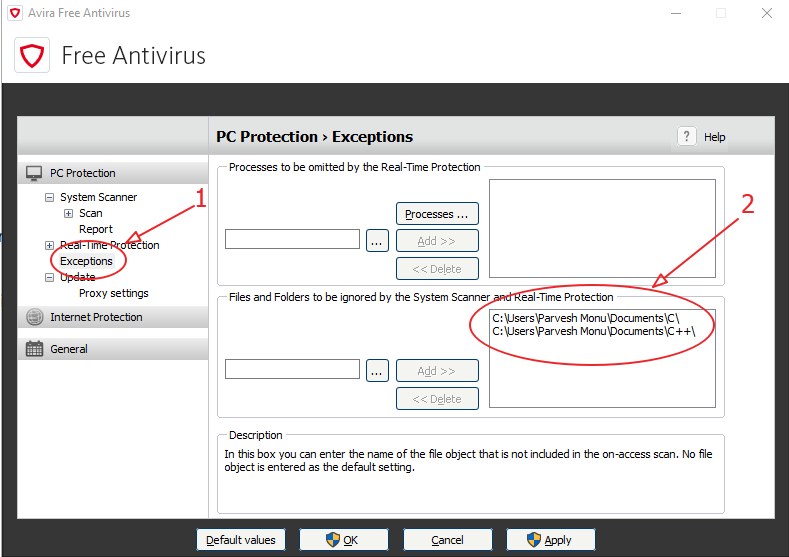 Here is how you can use PowerShell to exclude your apps from Windows Defender and MS realtime protection:

Still haven't figured out how to do this for Norton and others.

go to avast 'file system sheild' and click 'expert settings' button. then find and click the 'exclusions' option from the menu at left side. Add your project foldr in the file exclusion list. This is safe unless dangerous viruses crawls in to your project folder without ur knowldge :P

You need to go to your anti virus account->settings->exclusions or something similar and type in the file path as mentioned by others. I did it with avast. The 1st time around it didn't work so I uninstall and install and then went to exclusions and it works now.

Not the answer you're looking for? Browse other questions tagged c++ c virus or ask your own question.

-2
Program when compiled with /MT antivirus capture it as virus
3
Why this short C code is detected as a Virus?
0
(C++/Visual Studio) cannot find or open pdb file & no printing to console

3107
Improve INSERT-per-second performance of SQLite
2014
C++11 introduced a standardized memory model. What does it mean? And how is it going to affect C++ programming?
0
How can I write cross-platform c++ programs on my mac?
771
Why is my program slow when looping over exactly 8192 elements?
7
c++ command line compilation with gcc
3
How to ensure my code is ansi C, no C++ involved. Could compiler like gcc can be set to prompt error when meeting feature in C++?
42
OSX - replace gcc version 4.2.1 with 4.9 installed via Homebrew
19
GCC runtime libraries vs Microsoft Visual C++ runtime redistributables