Could any one give an explanation on how a DHT works?

Nothing too heavy, just the basics.

Ok, they're fundamentally a pretty simple idea. A DHT gives you a dictionary-like interface, but the nodes are distributed across the network. The trick with DHTs is that the node that gets to store a particular key is found by hashing that key, so in effect your hash-table buckets are now independent nodes in a network.

This gives a lot of fault-tolerance and reliability, and possibly some performance benefit, but it also throws up a lot of headaches. For example, what happens when a node leaves the network, by failing or otherwise? And how do you redistribute keys when a node joins so that the load is roughly balanced. Come to think of it, how do you evenly distribute keys anyhow? And when a node joins, how do you avoid rehashing everything? (Remember you'd have to do this in a normal hash table if you increase the number of buckets).

One example DHT that tackles some of these problems is a logical ring of n nodes, each taking responsibility for 1/n of the keyspace. Once you add a node to the network, it finds a place on the ring to sit between two other nodes, and takes responsibility for some of the keys in its sibling nodes. The beauty of this approach is that none of the other nodes in the ring are affected; only the two sibling nodes have to redistribute keys.

There are many other overlay structures such as this that use content-based routing to find the right node on which to store a key. Locating a key in a ring requires searching round the ring one node at a time (unless you keep a local look-up table, problematic in a DHT of thousands of nodes), which is O(n)-hop routing. Other structures - including augmented rings - guarantee O(log n)-hop routing, and some claim to O(1)-hop routing at the cost of more maintenance.

Read the wikipedia page, and if you really want to know in a bit of depth, check out this coursepage at Harvard which has a pretty comprehensive reading list.

DHTs provide the same type of interface to the user as a normal hashtable (look up a value by key), but the data is distributed over an arbitrary number of connected nodes. Wikipedia has a good basic introduction that I would essentially be regurgitating if I write more -

In naive hashing, first variable is the key of the object to be stored in the table. We'll call the key "x". The second variable is is the number of buckets, "n". So, to determine which bucket/machine the object is stored in, you have to calculate: hash(x) mod(n). Therefore, when you change the number of buckets, you also change the address at which almost every object is stored.

The core of a DHT is a hash table. Key-value pairs are stored in DHT and a value can be looked up with a key. The keys are unique identifiers to values that can range from blocks in a blockchain to addresses and to documents.

What differentiates a DHT from a normal hash table is the fact that storage and lookup on DHT are distributed across multiple (can be millions) nodes or machines. This very characteristic of DHT makes it look like distributed databases used for storage and retrieval. There is no master-slave hierarchy or a centralized control among the participating nodes. All the nodes are treated as peers.

DHT provides freedom to the participating nodes such that the nodes can join or leave the network anytime. Due to this reason, DHTs are widely used in Peer-to-Peer (P2P) networks. In fact, part of the motivation behind the research of DHT stems from its usage in P2P networks.

Speaking in terms of a DHT, each node has a unique node ID of k bits and these nodes are arranged in the increasing order of their node IDs. Assume these nodes are arranged in a ring structure called identifier ring. For each node, the successor has the shortest distance clockwise away. For most nodes, this is the node whose ID is closest to but still greater than the current node’s ID. To find out the node appropriate for a particular key, first hash the key K and all the nodes to exactly k bits using consistent hashing techniques like SHA-1. 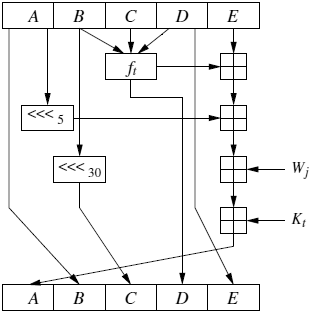 Start at any point in the ring and traverse clockwise till you catch the node whose node ID is closer to the key K, but can be greater than K. This node is the one responsible for storage and lookup for that particular key. 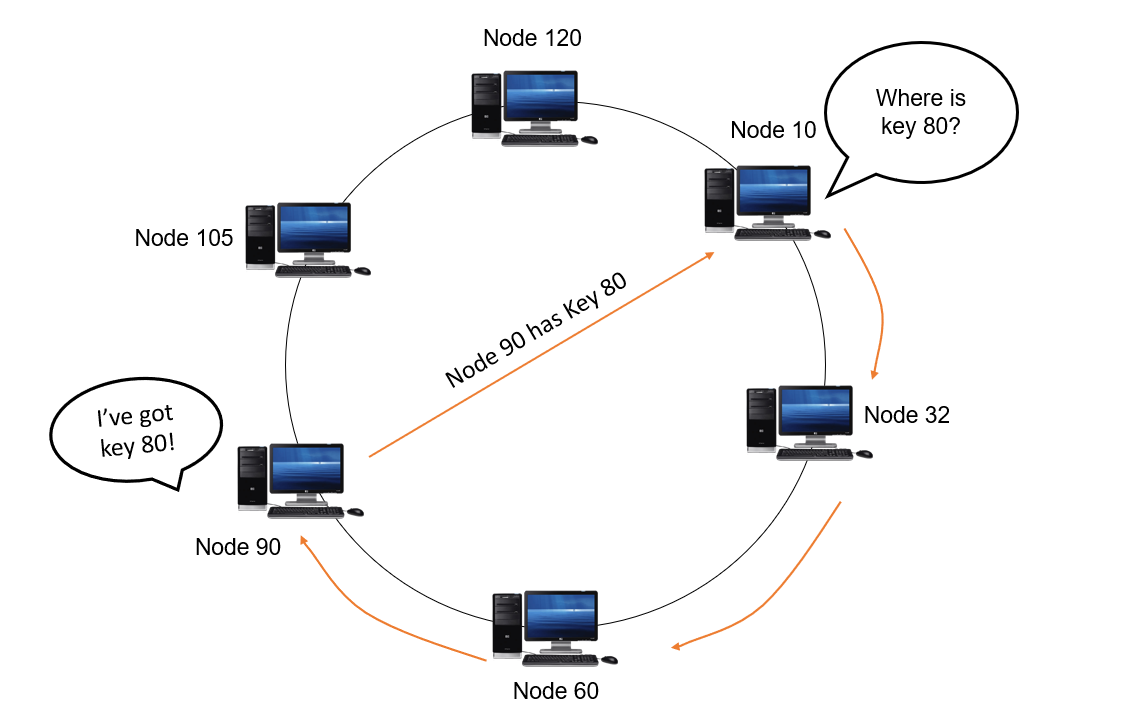 In an iterative style of lookup, each node Q queries its successor node for KV (key-value) pair. If the queried node does not have the target key, it will return a set of nodes S that can be closer to the target. The querying node Q then queries the nodes in S which are closer to itself. This continues until either the target KV pair is returned or when there are no more nodes to query.

This lookup is very suitable for an ideal scenario where all the nodes have a perfect uptime. But how to handle scenarios when nodes leave the network either intentionally or by failure? This calls for the need for a robust join/leave protocol.

Not the answer you're looking for? Browse other questions tagged theory p2p dht or ask your own question.

1
What does “distribution of the hash function” mean?

555
What is Turing Complete?
77
How does a DHT in a Bittorent client get “bootstrapped”?
0
Could a Distributed Hash Table (DHT) be used for a dynamic web application? Another P2P design?
4
Hello World for an existing DHT
0
Chord p2p distributed hash table (dht) implementation over http protocol
8
How does a node join a Distributed Hash Table (DHT) cluster?
2
Connect to torrent “swarm” or DHT with ruby
1
Why does DHT hash the filenames?
0
How to secure a key in a distributed-hash-table so that only people with the private-key can write it?