How do I create an iPhone app with background and rotating images?

I am making the transition to iPhone programming and found how to display Image in ImageView? to answer some of my questions, but did not specify a couple of basics, namely what kind of project(s) can display an image, and where in the project the code can be put. I created an empty project and am getting errors for the last two lines of:

If I am going to display a clock face, eventually one with rotating hands but for now the goal is to display the face itself, can I do it with a basic project, or do I need to start over with another project, and where should I be placing the sample code? http://www.iphoneexamples.com/ has AFAICT some excellent examples, but they seem to assume you know where to put the code in question, and that you have chosen whatever is the most appropriate project.

So, let's say I am not trying to animate the clock hands immediately, and for now I want my (PNG) clock face to show, optionally well-positioned on the screen. What kind of project do I start with, where do I put the code to display the image, and what code should I be using to display the image?

Go to the Interface Builder or your Storyboard, if you started an empty project you probably don't have any of these, I'd recommend you to start with a Single View project, then on Interface Builder or the Storyboard, from the Library drag an Image View (also called UIImageView) and place it on your canvas, using the properties bar on the right you can set the image just like in the following image 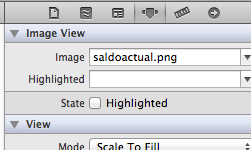 That way you get to display an image on a view, resize the view properly to fit your image dimesions and repeat for every other image you want to add.

For what you are asking my guess is that you are pretty new to iOS Development, I can recommend you Beginning iOS 6 Development: Exploring the iOS SDK

Not the answer you're looking for? Browse other questions tagged ios iphone ipad or ask your own question.

1228
How can I develop for iPhone using a Windows development machine?
1055
How to change the name of an iOS app?
188
UIImage: Resize, then Crop
0
Memory issue in iPhone?
3
iPhone - Splash Screen with progress bar
328
iPhone App Icons - Exact Radius?
0
uniimageview not updating after views tranistion
0
How do I reference my MainViewController from another class?
0
error in adding a event to an image in xcode
306
UIImageView missing images in Launch Screen on device