How to color System.out.println output? [duplicate]

How can I color Java output?

For example in C and other languages I can use ANSI-escape like \033[0m to do this. But in Java it doesn't work.

You may not be able to color Window's cmd prompt, but it should work in many unix (or unix-like) terminals.

Also, note that some terminals simply won't support some (if any) ANSI escape sequences and, especially, 24-bit colors.

Please refer to the section Curses at the bottom for the best solution. For a personal or easy solution (although not as cross-platform solution), refer to the ANSI Escape Sequences section.

While it is not the best way to do it, the easiest way to do this in a programming or scripting language is to use escape sequences. From that link:

An escape sequence is a series of characters used to change the state of computers and their attached peripheral devices. These are also known as control sequences, reflecting their use in device control.

However, it gets even easier than that in video text terminals, as these terminals use ANSI escape sequences. From that link:

ANSI escape sequences are a standard for in-band signaling to control the cursor location, color, and other options on video text terminals. Certain sequences of bytes, most starting with Esc and '[', are embedded into the text, which the terminal looks for and interprets as commands, not as character codes.

How to Use ANSI Escape Sequences

Some programming langauges (like Java) will not interpret \e or \x1b as the ESC character. However, we know that the ASCII character 27 is the ESC character, so we can simply typecast 27 to a char and use that to begin the escape sequence.

Here are some ways to do it in common programming languages:

In Shell Prompt OR Scripts

If you are working with bash or zsh, it is quite easy to color the output (in most terminals). In Linux, Os X, and in some Window's terminals, you can check to see if your terminal supports color by doing both of the following:

If I recall correctly, linux terminals tend to support both \e and \x1b escape sequences, while os x terminals only tend to support \e, but I may be wrong. Nonetheless, if you see something like the following image, then you're all set! (Note that I am using the shell, zsh, and it is coloring my prompt string; also, I am using urxvt as my terminal in linux.) 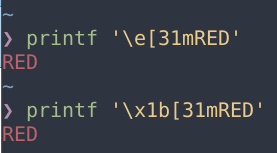 "How does this work?" you might ask. Bascially, printf is interpretting the sequence of characters that follows (everything inside of the single-quotes). When printf encounters \e or \x1b, it will convert these characters to the ESC character (ASCII: 27). That's just what we want. Now, printf sends ESC31m, and since there is an ESC followed by a valid ANSI escape sequence, we should get colored output (so long as it is supported by the terminal).

You can also use echo -e '\e[32mGREEN' (for example), to color output. Note that the -e flag for echo "[enables] interpretation of backslash escapes" and must be used if you want echo to appropriately interpret the escape sequence.

ANSI escape sequences can do more than just color output, but let's start with that, and see exactly how color works; then, we will see how to manipulate the cursor; finally, we'll take a look and see how to use 8-bit color and also 24-bit color (although it only has tenuous support).

On Wikipedia, they refer to ESC[ as CSI, so I will do the same.

To color output using ANSI escapes, use the following:

I will use bash or zsh to demonstrate all of the possible color combinations. Plop the following in bash or zsh to see for yourself (You may need to replace \e with \x1b): 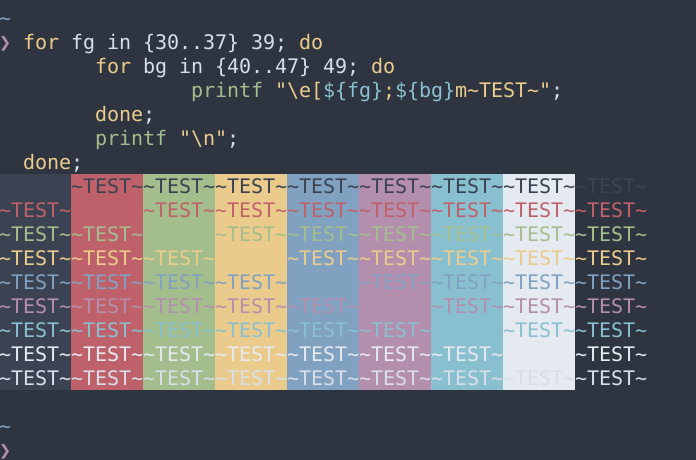 SGR just allows you to change the text. Many of these do not work in certain terminals, so use these sparingly in production-level projects. However, they can be useful for making program output more readable or helping you distinguish between different types of output.

Color actually falls under SGR, so the syntax is the same:

It's also worthwhile to note that you can separate any of the above attributes with a semi-colon. For example printf '\e[34;47;1;3mCRAZY TEXT\n' will show CRAZY TEXT with a blue foreground on a white background, and it will be bold and italic.

Plop the following in your bash or zsh shell to see all of the text effects you can do. (You may need to replace \e with \x1b.)

You can see that my terminal supports all of the text effects except for faint (2), conceal (8) and cross out (9).

While most terminals support this, it is less supported than 0-7,9 colors.

If you want to preview all of the colors in your terminal in a nice way, I have a nice script on gist.github.com. 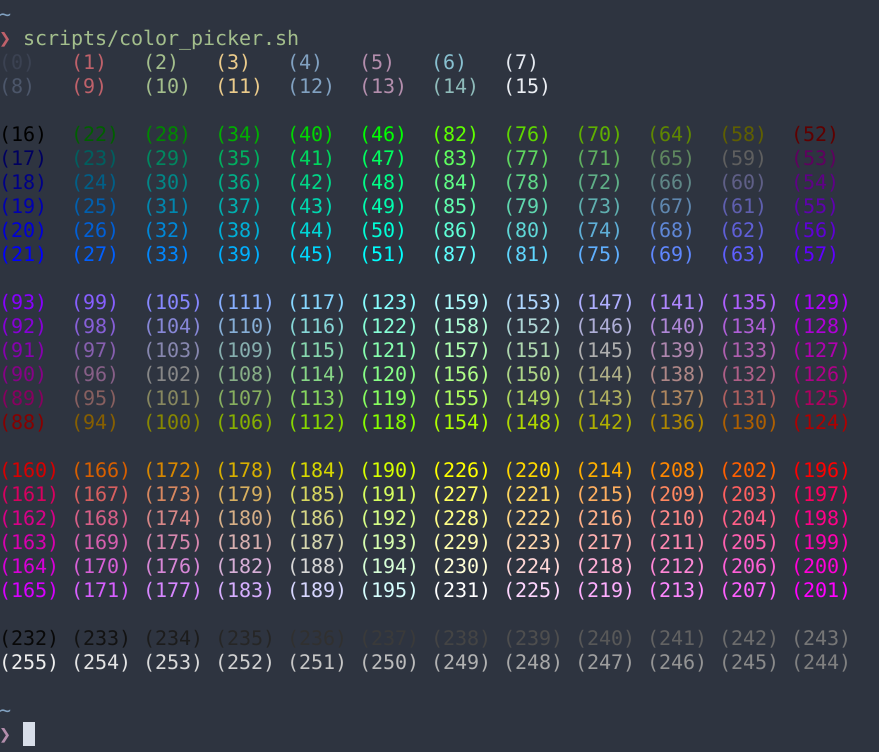 If you want to change the background using 8-bit colors, just replace the 38 with a 48:

Also known as true color, 24-bit color provides some really cool functionality. Support for this is definitely growing (as far as I know it works in most modern terminals except urxvt, my terminal [insert angry emoji]).

24-bit color is actually supported in vim (see the vim wiki to see how to enable 24-bit colors). It's really neat because it pulls from the colorscheme defined for gvim; eg, it uses the fg/bg from highlight guibg=#______ guifg=#______ for the 24-bit colors! Neato, huh?

Here is how 24-bit color works:

Result (this is in gnome-terminal since urxvt DOES NOT SUPPORT 24-bit color ... get it together, urxvt maintainer ... for real): 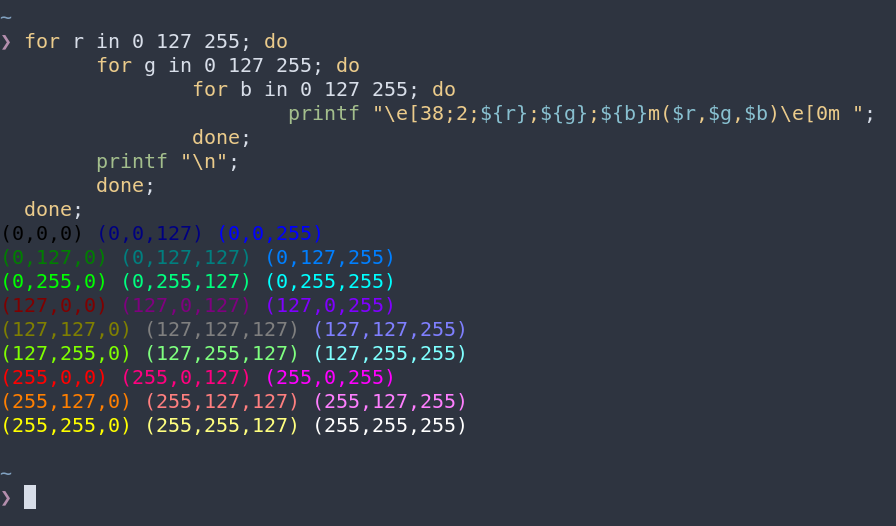 Sometimes \e and \x1b will not work. For example, in the sh shell, sometimes neither works (although it does on my system now, I don't think it used to).

This will insert a "raw" ESC character (ASCII: 27). It will look like this ^[, but do not fret; it is only one character—not two.

Refer to the Curses (Programming Library) page for a full reference on curses. It should be noted that curses only works on unix and unix-like operating systems.

Up and Running with Curses

I won't go into too much detail, for search engines can reveal links to websites that can explain this much better than I can, but I'll discuss it briefly here and give an example.

Why Use Curses Over ANSI Escapes?

If you read the above text, you might recall that \e or \x1b will sometimes work with printf. Well, sometimes \e and \x1b will not work at all (this is not standard and I have never worked with a terminal like this, but it is possible). More importantly, more complex escape sequences (think Home and other multi-character keys) are difficult to support for every terminal (unless you are willing to spend a lot of time and effort parsing terminfo and termcap and and figuring out how to handle every terminal).

Curses solves this problem. Basically, it is able to understand what capabilities a terminal has, using these methods (as described by the wikipedia article linked above):

Most implementations of curses use a database that can describe the capabilities of thousands of different terminals. There are a few implementations, such as PDCurses, which use specialized device drivers rather than a terminal database. Most implementations use terminfo; some use termcap. Curses has the advantage of back-portability to character-cell terminals and simplicity. For an application that does not require bit-mapped graphics or multiple fonts, an interface implementation using curses will usually be much simpler and faster than one using an X toolkit.

I find python is really easy to use, but if you want to use curses in a different programming language, then simply search it on duckduckgo or any other search engine. :) Here is a quick example in python 3: 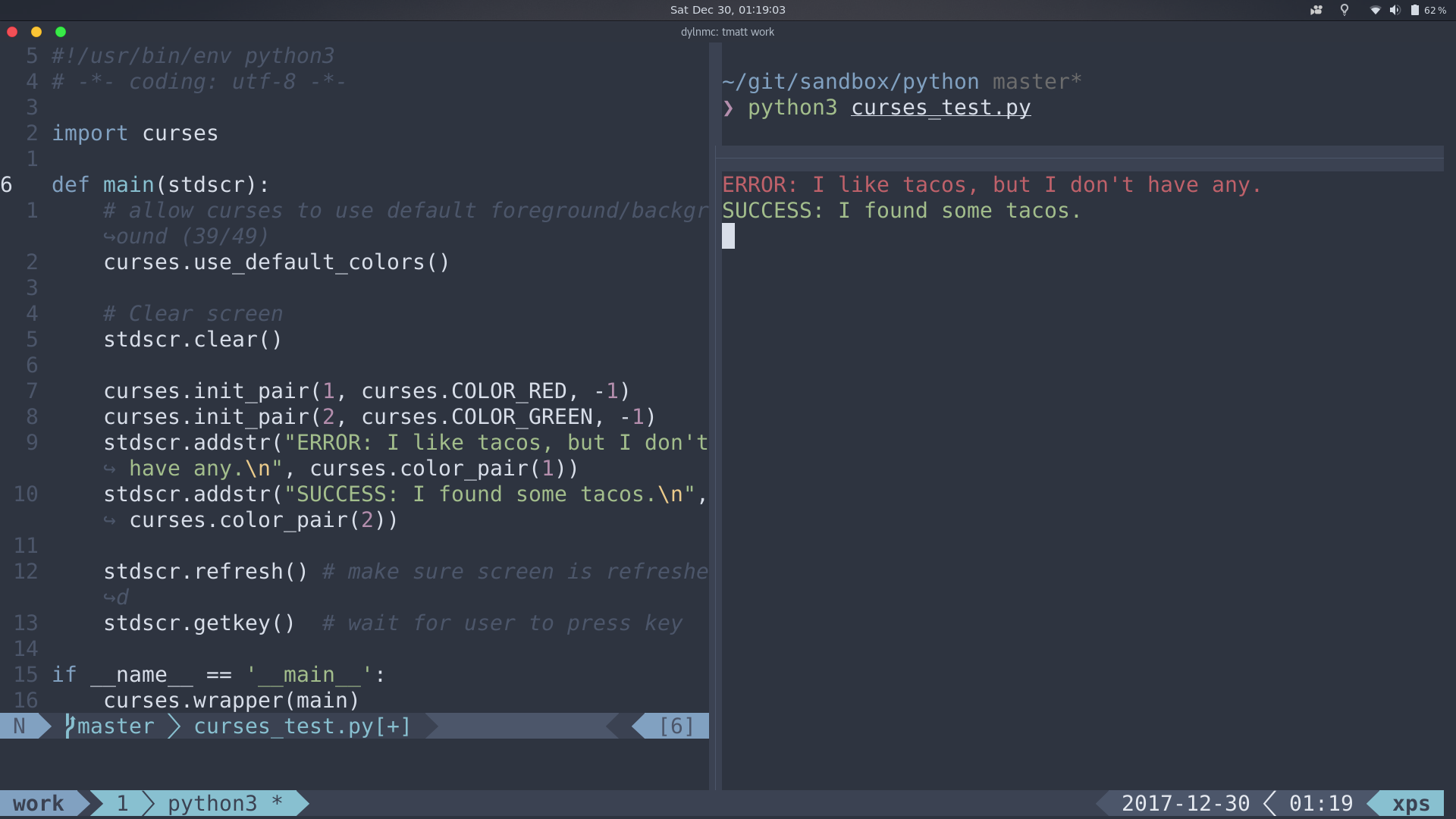 You might think to yourself that this is a much more round-about way of doing things, but it really is much more cross-platform (really cross-terminal … at least in the unix- and unix-like-platform world). For colors, it is not quite as important, but when it comes to supporting other multi-sequence escape sequences (such as Home, End, Page Up, Page Down, etc), then curses becomes all the more important.

This has worked for me:

You need the ending "[37m" to return the color to white (or whatever you were using). If you don't it may make everything that follows "red".

No, but there are third party API's that can handle it

Edit: of course there are newer articles than that one I posted, the information is still viable though.

Above link is dead, see this question instead: How to print color in console using System.out.println?

You can use the JANSI library to render ANSI escape sequences in Windows.

Try this below code:

Here is a solution for Win32 Console.

2) These two Java classes will do the trick.

The simplest method is to run your program (unmodified) in Cygwin console.

The second simplest method is to run you program (also unmodified) in the ordinary Windows console, pipelining its output through tee.exe (from Cygwin or Git distribution). Tee.exe will recognize the escape codes and call appropriate WinAPI functions.

For Linux it uses the ANSI escape codes that WhiteFang mentioned, but abstracts them using words instead of codes which is much more intuitive.

For Windows it actually includes the JAnsi library but creates an abstraction layer over it, maintaining the intuitive and simple interface created for Linux.

This library is licensed under the MIT License so feel free to use it.

Have a look at JCDP's github repository.

Escape sequences must be interpreted by SOMETHING to be converted to color. The standard CMD.EXE used by java when started from the command line, doesn't support this so therefore Java does not.

Check This Out: i used ANSI values with escape code and it probably not work in windows command prompt but in IDEs and Unix shell. you can also check 'Jansi' library here for windows support.

I've written a library called AnsiScape that allows you to write coloured output in a more structured way:

The library it also allows you to define your own "escape classes" akin to css classes.

System.err.println("Errorrrrrr") it will print text in Red color on console.

This works in eclipse just to turn it red, don't know about other places.

Not the answer you're looking for? Browse other questions tagged java colors system.out or ask your own question.

401
How to print color in console using System.out.println?
0
How to output a specific part of text in color?
3
System.out.println , System.err.println
2
taking input in java after printing in color
0
Java Console Scanner Color
0
StringBuilder with some text in red overriding toString in Java
-4
Colouring specific letters in a String?
0
How to make a set choose a random name in a set
0
Use Java application to run commands on windows cmd
1
Set string color using java
See more linked questions

1544
Fastest way to determine if an integer's square root is an integer
4418
How do I read / convert an InputStream into a String in Java?
3821
How do I generate random integers within a specific range in Java?
408
How can I color Python logging output?
2185
How to get an enum value from a string value in Java
1140
Converting array to list in Java
1155
Which @NotNull Java annotation should I use?
606
Programmatically Lighten or Darken a hex color (or rgb, and blend colors)
676
Why are static variables considered evil?
1177
How to install Java 8 on Mac