Detect if a set of points in an array that are the vertices of a complex polygon were defined in a clockwise or counterclockwise order?

EDIT: I updated the program with the answer and it works great!

I am making a program (feel free to try it out) that lets users draw polygons which it then triangulates. They can click to add vertices and hit enter to triangulate. Anyways, the algorithm works fine as long as I tell it if the points were drawn in a clockwise or counterclockwise fashion (right now I have it set only to work with clockwise polygons). I have been trying to figure this out for days, but have no idea how to determine whether the points are clockwise or counterclockwise. Try drawing shapes with the program mentioned earlier to get a better idea, you can experience what I am talking about better than I can try to explain it.

Here is how the points are defined:

Here is an image of a clockwise polygon: 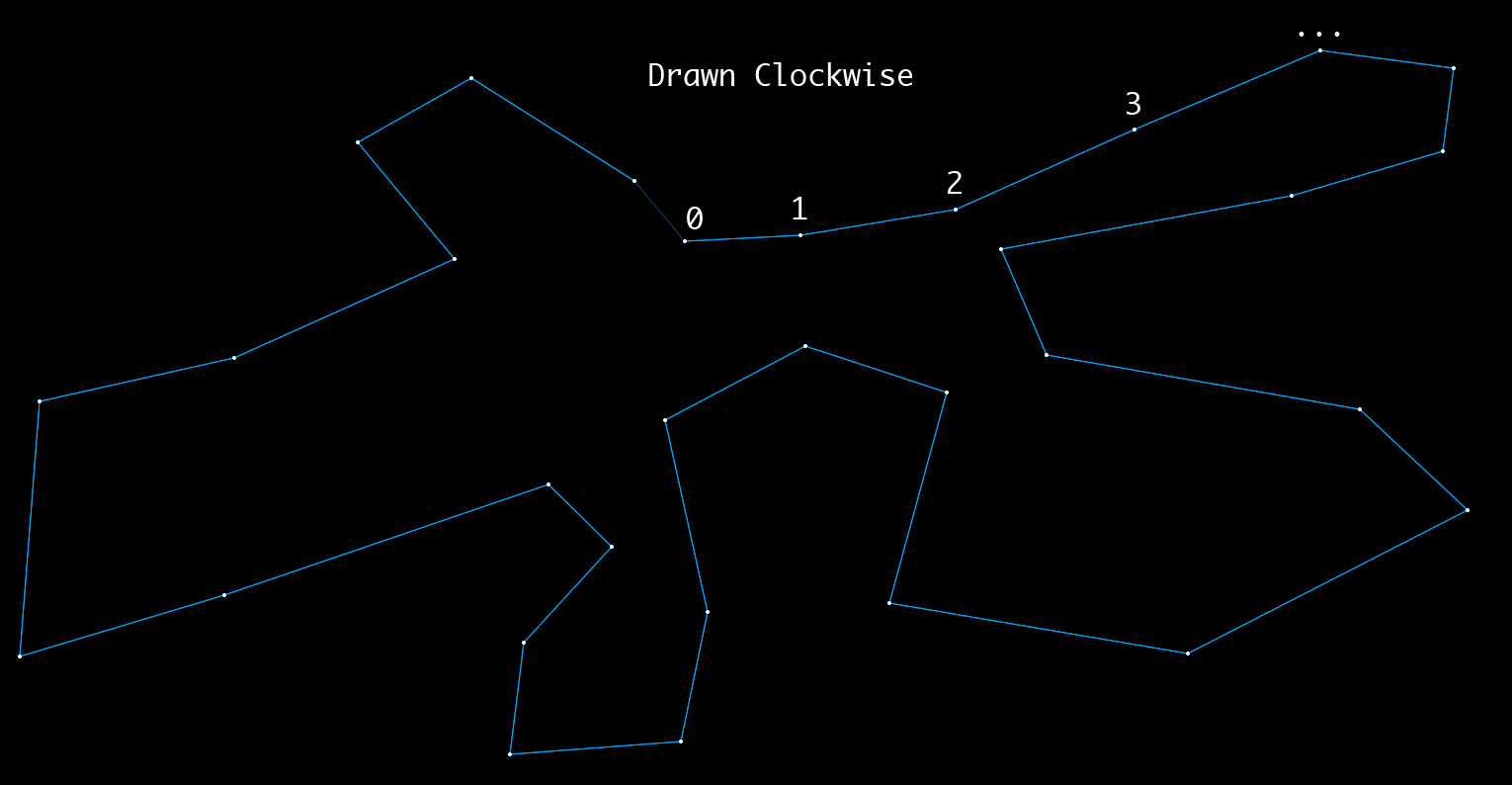 Here is an image of a counterclockwise polygon: 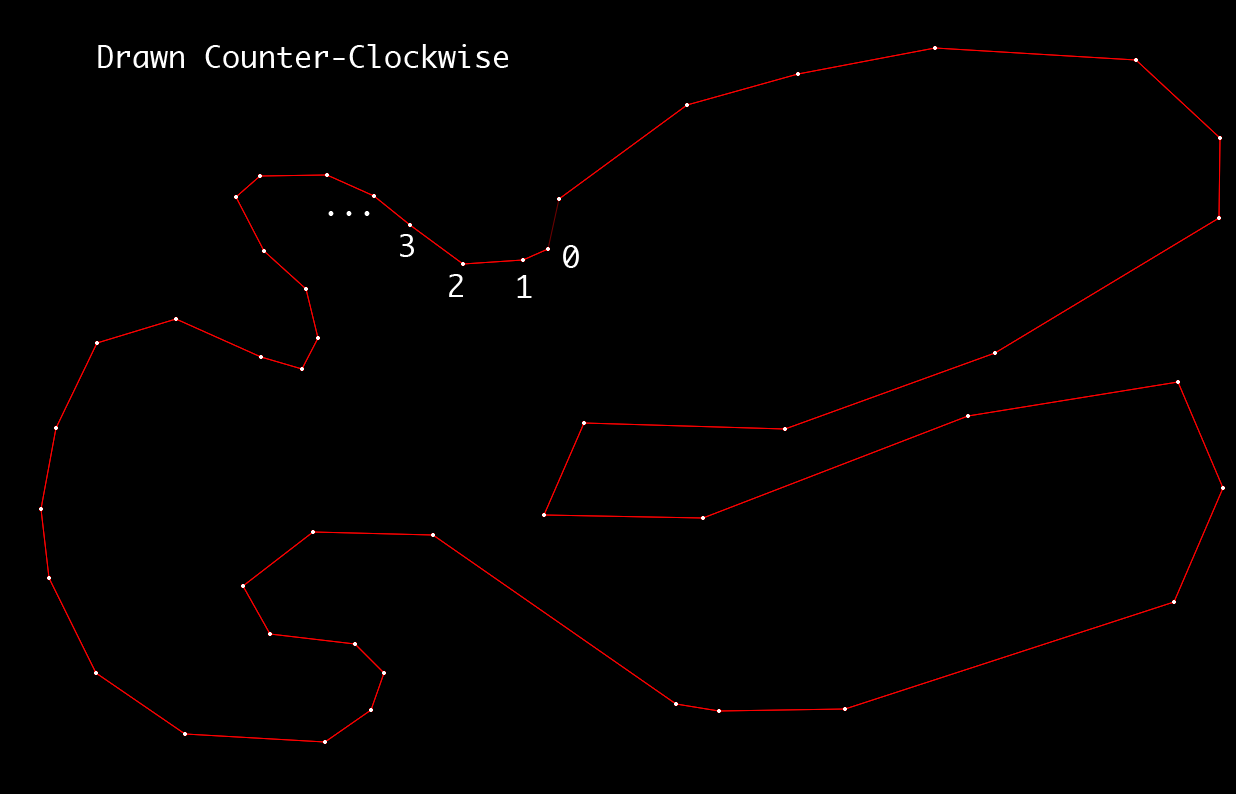 If you could help me figure out how to determine the "clockwise-ness" of the points, I would be very grateful!

Compute the polygon area using the shoelace formula, but without the absolute value sign. If the result is positive, the points are ordered counterclockwise, and if negative - clockwise.

In case someone is using three.js the ShapeUtils comes with an inbuilt isClockWise method which internally uses the area method to determine the sign of the calculated area.

The ShapeUtils.isClockWise Method can be found here.

The ShapeUtils.area Method can be found here.

A general idea would be to take a look at the convex hull of your polygone and guess the orientation from there. However, I think that you do not need to build the whole hull to find the orientation, but just one segment belonging to it.

Warning: While "walking" on your polygon, do not restart the numeration, otherwise it will be wrong. On the top figure, 4-(n-1) let the figure on the left!

Your intuitive definition of clockwisedness is not well defined. For example, If I draw a horseshoe:

If 0 = a < b < b < d and I look at a and b I would conclude from your description that the shape has been drawn clockwise, but if 0 = c < d < a < b I would conclude that the shape has been drawn anticlockwise. Since both of these scenarios involve the same direction in which the points were drawn, just from different starting points, I can only conclude that your definition is lacking.

The horseshoe I drew isn't the best; the idea is that it is almost a circle with just a small hole at the bottom, to allow the other side to be drawn in the opposite direction.

If you are interested in defining things more strictly, then I suggest something along the following lines:

Considering any finite simple polygon as separating the plane into two distinct areas (one finite and one infinite), we can always consider the finite area to be the interior of the polygon. In such a scenario we define a vertex ordering to be clockwise iff the order of the points runs with the exterior along its right-hand side. This is called curve orientation.

Once you have this more solid definition, implementation can be as simple as counting the winding number. Take the midpoint of any ordered pair, say 0 and 1, take a line segment to the right of the ordered pair (at any angle, say perpendicular), and count how many intersections it has with other line segments: The curve is clockwise iff the number is odd.

This is simple to implement, linear in time O(n), and adds constant space O(1).

This a function function that specialized for OpenLayers. As You Can See The Condition Of Clockwise Polygon Is area<0 This Reference Confirm It.

Not the answer you're looking for? Browse other questions tagged javascript arrays math geometry 2d or ask your own question.

314
How to determine if a list of polygon points are in clockwise order?
-1
python - arc direction