Is it possible to view C++ code with instantiated templates before it gets compiled (g++)?

the g++ compiler has a flag that produces macro-expanded code (-E), so I am wondering if there is a way to view the program coude after template instantiation before the actual compilation takes place?

Well, the closer you can get is to read the AST/ABT generated by the compiler:

The former represents the view of the syntax as the compiler understands it and the latter is similar after resolution of the bindings (ie, that the a here is actually the variable that was declared 3 lines before or that the foo correspdonds to the function defined in that header...).

Clang allows to dump its AST... which is in fact the ABT, actually, it's being improved at this very moment; sneak developer preview: 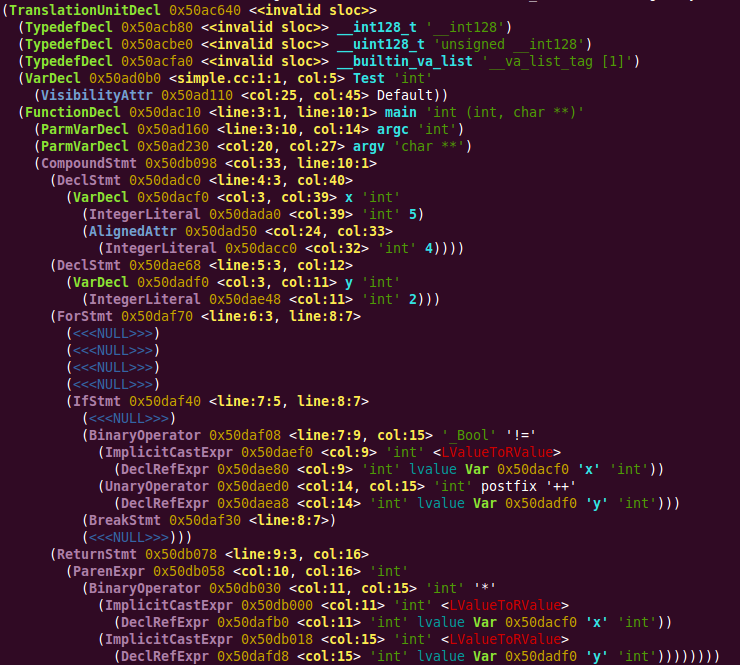 Normally you should see how the template was instantiated there.

Note: to get it you need the -ast-dump pass to the clang front-end.

Not the answer you're looking for? Browse other questions tagged c++ templates g++ instantiation abstract-syntax-tree or ask your own question.

575
Storing C++ template function definitions in a .CPP file
653
How do I detect unsigned integer multiply overflow?
1924
How can I profile C++ code running on Linux?
12
Viewing compiler expanded code - C++
105
Explicit template instantiation - when is it used?
2001
C++11 introduced a standardized memory model. What does it mean? And how is it going to affect C++ programming?
45
Template instantiation details of GCC and MS compilers
2301
Why are elementwise additions much faster in separate loops than in a combined loop?
771
Why is my program slow when looping over exactly 8192 elements?
1479
Replacing a 32-bit loop counter with 64-bit introduces crazy performance deviations with _mm_popcnt_u64 on Intel CPUs